From Sidon to Huelva Interconnections in the Mediterranean 16th-6th c. BC

It is precisely this sort of communication and cultural interaction between the Mediterranean peoples that this Exhibit attempts to illustrate. We wish to gain a glimpse through the vestiges of time, and with the help of the material remains -the objects occasionally unearthed by the archaeologists-, we thereby attempt to reconstruct a portion of this lost reality, rendering a view into the history of a far past millennium (16th-6th c. BC).

This exhibition presented voyages and travels, commercial, social, and ideological as well as other interactions, such as beliefs, habits and customs of the people who look alike and yet differ, as do the waves of the Mediterranean.

A view therefore into space and time; A window onto the Mediterranean, the 'Great Green' of the Egyptians and the "wine-dark sea" of Homer. Windows on the sea, "the most transparent of all testimonies" according to Braudel or better yet, according to Kazantzakis. "...(the) shiniest sea... which holds and remembers the furrows dug on her breasts, by the ancient prows. (The sea) that would be full of wrinkles, yet forgets and maintains her youth..."

Ten countries joined their forces in order to bring to fruition this unique in its kind exhibition at the Museum of Cycladic Art (Greece, Cyprus, Lebanon, Syria, Italy - including Sicily and Sardinia - the Vatican, Malta, Spain, and for the Catalogue Turkey), ninety-two museums in total.

A series of approximately 1200 artefacts of the Late Bronze and the Early Iron Age, made of every sort of material, such as gold, silver, bronze, iron, clay, various stones, glass, faience, ivory, hippopotamus tooth, ostrich eggs, even processed sea-shells from the Red Sea turned into ornaments or implements, that is vessels of all sizes, effigies of gods, men and animals or birds, weapons, tools, jewellery; found in the space of decades on the sites of the larger or smaller cities and settlements of antiquity, from sanctuaries or necropoleis, all artefacts shown here serve the purpose of the exhibition, which is to demonstrate the dense communication network, in multiple levels, of the ancient peoples inhabiting the land surrounding the Mediterranean - the Greeks, the Phoenicians, the Assyrians, the Egyptians, the Hittites, the inhabitants of the Italian Peninsula (mostly the Etruscans), the Nouraghi of Sardinia, the Iberians and so on... 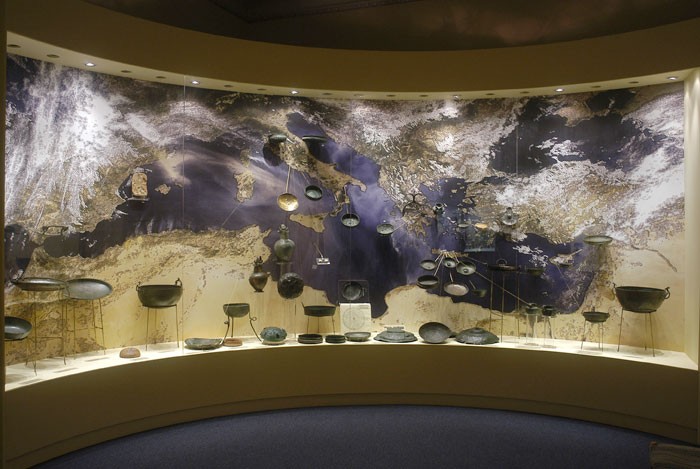 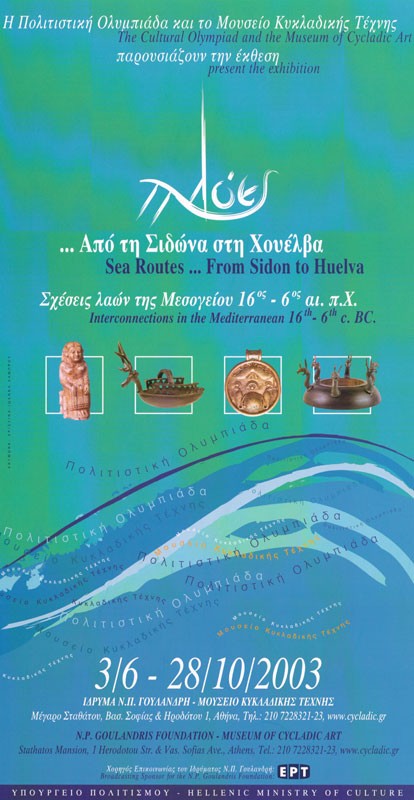 Sea Routes… | exhibition catalogue | From Sidon to Huelva. Interconnections in the Mediterranean 16th-6th c. BC Edited by: N.Chr. Stampolidis
Athens, 2003