The Museum of Cycladic Art is pleased to announce an exhibition by the Swiss artist Ugo Rondinone, under the title nude. The exhibition is a new site specific installation. Rondinone intervened and changed everything about the space, the floor, the light and the colours of the walls and ceiling to create his characteristically otherworld, dreamlike environment.

A special sculpture wall was installed in the first room to make sure this world is separated from everyday life. Neon lights and a lightbox sculpture create an even light that confuses our sense of time or place. Seven life-sized nude figures inhabit the space, in peaceful repose, informally posed on the floor. Jointed like store-window mannequins, the figures are exquisitely detailed, as they are cast in wax directly from the human body. The sections of each figure are made of different earth colors, a mixture of wax and earth pigments.

Naked and vulnerable, they seem to be resting after having performed. Rondinone himself says he chose dancers at the peak of their youth, bodies full of energy to accentuate the contradiction with their state of slumber. Why are they resting? From what? Maybe from life? 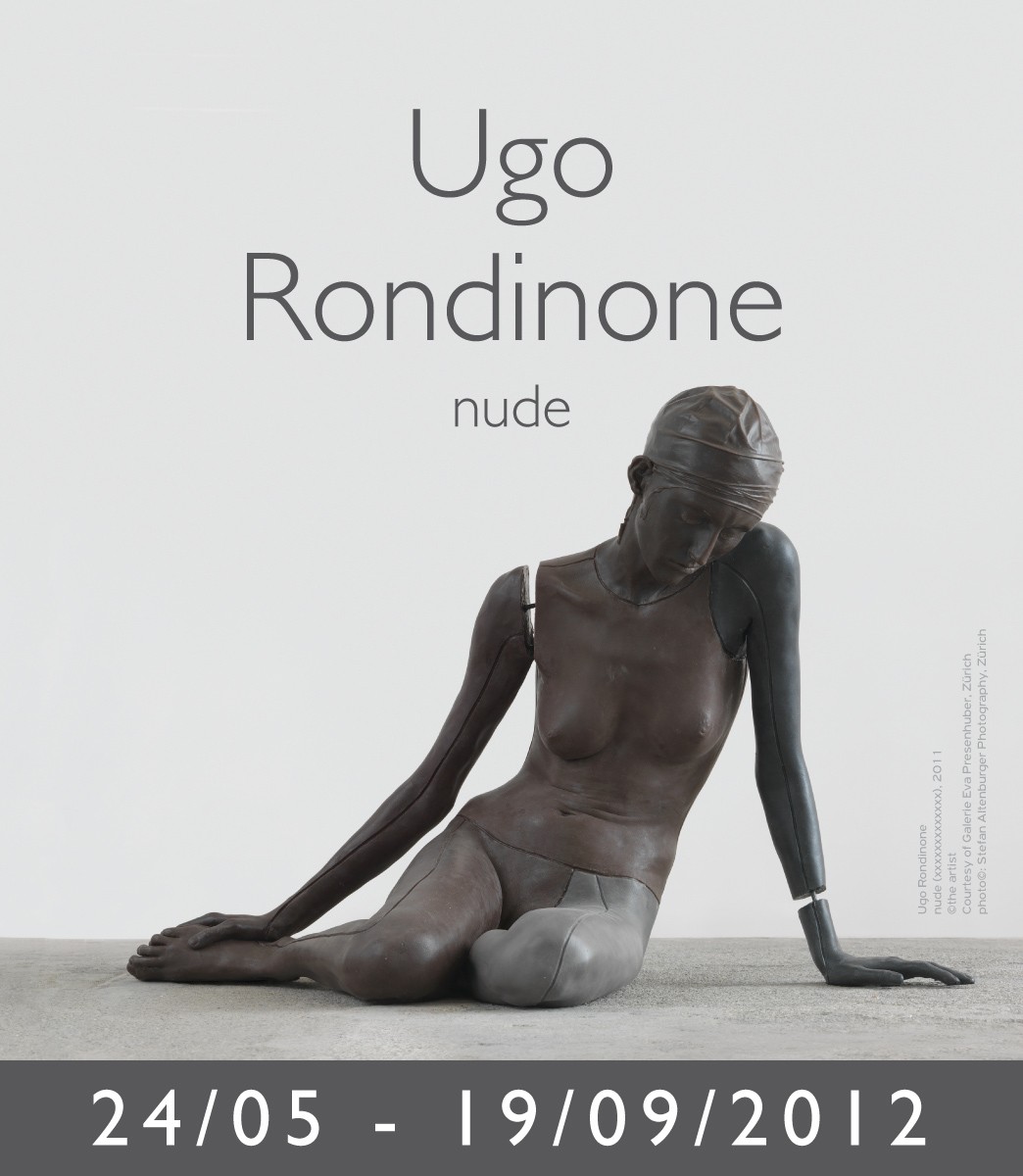 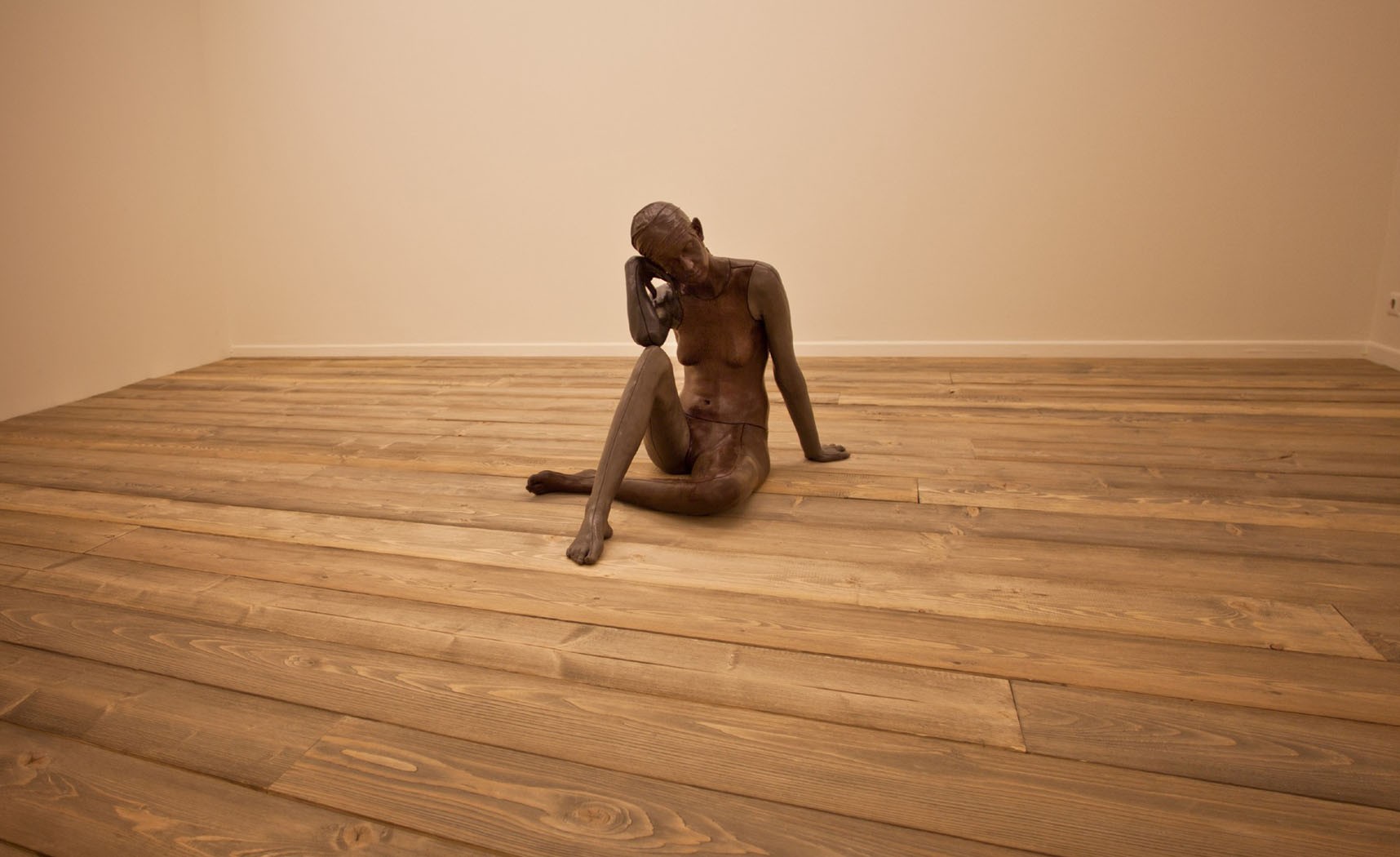 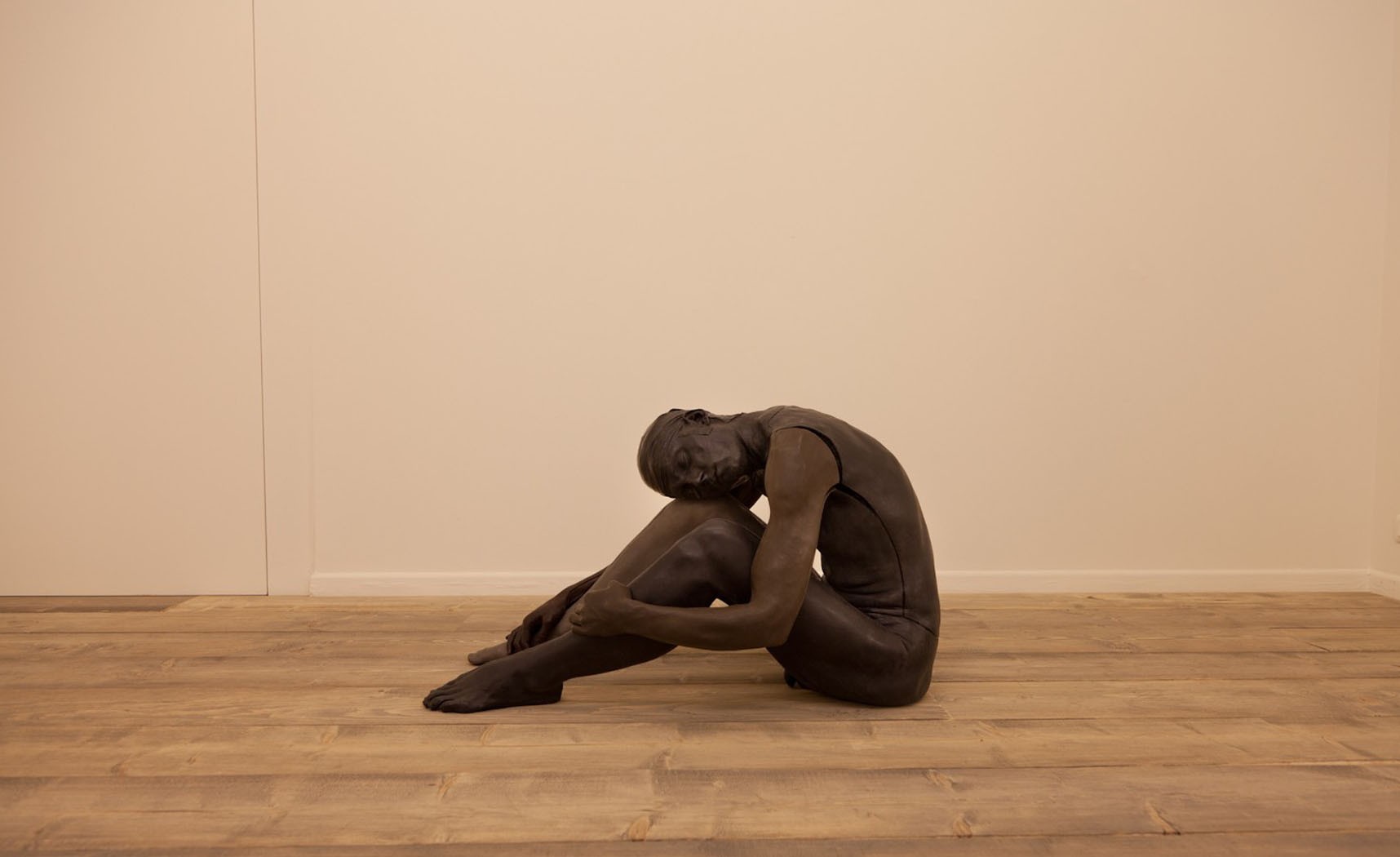 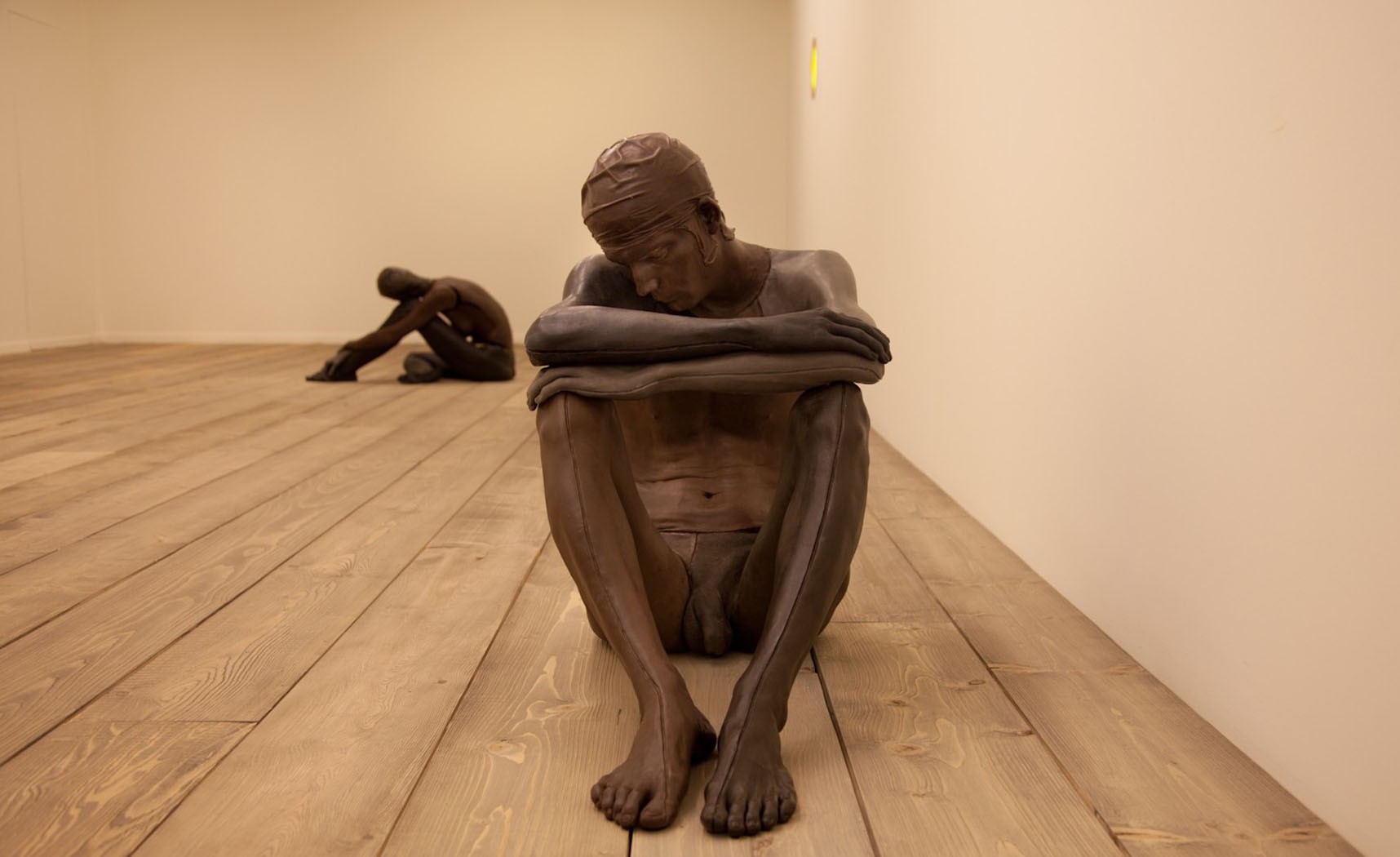 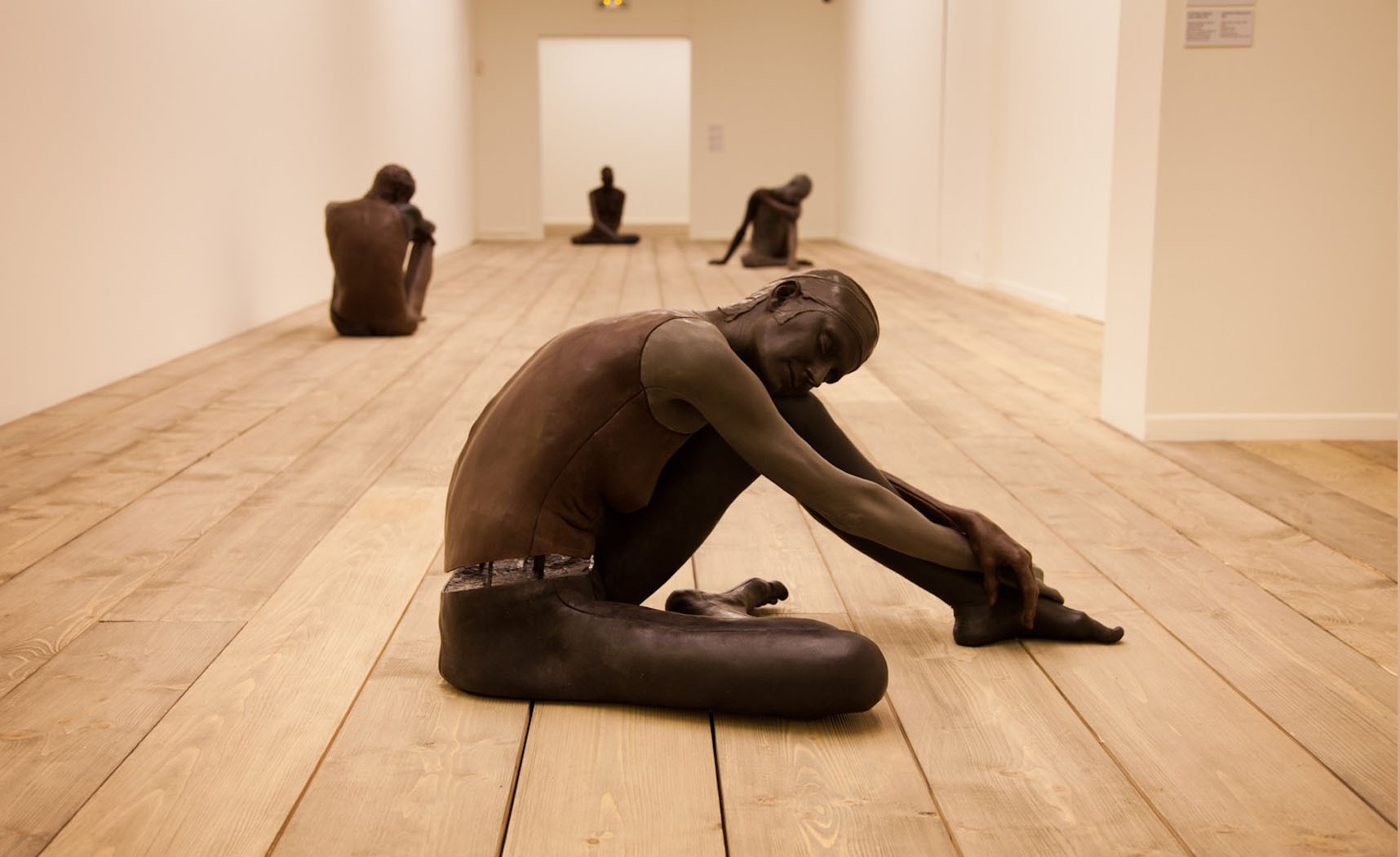 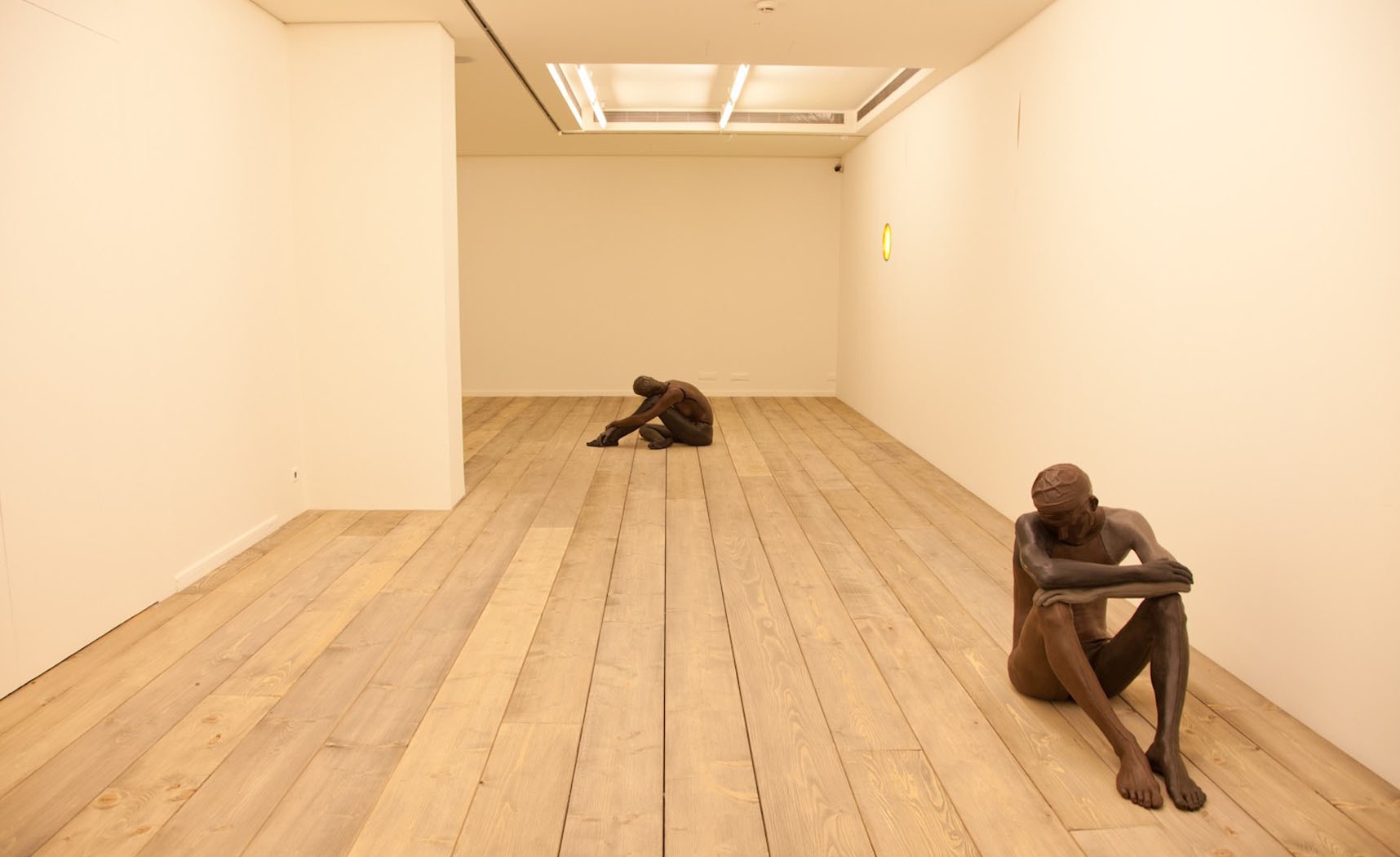 Ugo Rondinone has earned international attention for his poetic, evocative work across a diverse range of mediums, including painting,
drawing, photography, video, installation, and sculpture. Rondinone tends to work in series, selecting a medium and subject that he then explores in multiple variations.

Rondinone often uses the human figure in his work in order to explore the processes of how cultural meaning is created and circulated through the language of figuration. His unsettling installations, invite the viewer to reflect on the transience of human life. Some of the important such series are his photographic self-portraits "I Don't Live Here Anymore" and his reclining odalisque-clowns series "If There Were Anywhere But Desert". SUNRISE. east. and MOONRISE. east., Rondinone’s iconic totem-like figures, poetic and humorous metaphors for the cyclic nature of time, have been installed all over the world, from the Jardin des Tuileries in Paris, 2009 to the Yokohama Triennale in Japan this summer 2011. One of the figures was exhibited in the garden of the Cycladic museum in 2007.

His characteristic large rainbow signs mounted on buildings are just as enigmatically captivating. Phrases such as “Cry Me A River” or “Our Magic Hour”, taken from pop songs or everyday exclamations, seem to become beacons of hope. “Hell Yes!” was a particularly powerful installation on the façade of the New Museum, a dramatically positive affirmation at post 9/11 New York City. Rondinone has had major solo exhibitions at Aargauer Kunsthaus in Aarau, Switzerland (2010), Museo de Arte Contemporéneo de Castilla y León, Spain (2009), at Whitechapel Gallery in London (2006), Le Consortium, Dijon (2004), Centre Georges Pompidou in Paris and Museum of Contemporary Art in Sydney (2003), Kunsthalle Wien, Vienna (2002), P.S.1, Long Island City, New York (2000), at Kunsthaus Glarus and Galerie für zeitgenössische Kunst in Leipzig (1999). In 2007 he represented Switzerland in the 52nd Venice Biennial (with Urs Fischer) and curated “The Third Mind” at Palais de Tokyo in Paris. Rondinone’s neon sculpture "Hell,Yes!" (2001) was installed on the New Museum’s Bowery building façade from its opening in 2007 through 2010. Ugo Rondinone showed at the Yokohama Triennale 2011, Japan (August 2011-November 2011).

His neon sculpture "Our Magic Hour" installed on the museum’s roof and acting as the exhibition’s overall title and his twelve masks MOONRISE. east. were shown on the forecourt of the Yokohama Museum of Art.

Ugo Rondinone was born in 1964 in Brunnen, Switzerland to Italian parents and is based in New York.

WITH THE COLLABORATION OF
Greek Festival