The MCA is housed in two separate buildings, which are internally connected by a glass-roofed corridor.

The MCA is housed in two separate buildings, which are connected by a glass-roofed corridor: the Main Building, housing the permanent collections and the New Wing, and the Stathatos Mansion, housing the temporary exhibitions.

The Stathatos Mansion, work of the Bavarian architect Ernst Ziller, is one of the most important extant examples of Neoclassical architecture in nineteenth-century Athens. Since 1991 it houses temporary exhibitions and the offices of the museum. The building is accessible both from the corner of Vasilissis Sophias Avenue and Irodotou Street, and from the Main Building, via a closed passageway leading from the atrium.

Work of the Bavarian architect Ernest Ziller, the mansion one of the most important extant examples of Neoclassical architecture in nineteenth-century Athens. It was built in 1895 as the residence of the family of Othon and Athina Stathatos, to whom it belonged until 1938. It subsequently housed diplomatic representations of various states.

In 1982 it was purchased by the Greek State and was restored and refurbished by
the architect P. Kalligas, with a view to its use as accommodation for VIP
guests of the State. For various reasons this plan was abandoned and in
1991 the building was leased to the MCA, in order to cover its increased needs
for exhibition space.

In 2001 the Greek State decided to concede its use for another 50 years to the
N.P. Goulandris Foundation, to facilitate the operation of the museum.

The Stathatos Mansion gracefully combines elements of Greek and Roman
architecture with the canons of Romantic Classicism, prevailing in
nineteenth-century Europe. The building is articulated with two virtually
identical fronts, which meet at a monumental porch of Renaissance form. The
entrance is emphasized by an arched facade supporting a balcony on the first
floor, as well as by two female statues -goddess Athena and Nike- crowning the
roof.

A marble staircase leads up to the elevated ground floor of the
mansion, to the dining room and the main drawing room, as well as a cast-iron
rotunda axial to the entrance. No alterations have been made to these rooms,
which have retained their original gilded stucco mural decorations,
chandeliers, and fireplaces (during exhibitions parts of these are covered by
wooden revetments).

A grand staircase leads to the first floor and what were originally the bedchambers. Today these rooms have been appropriately arranged to host temporary exhibitions, while the fireplaces and other decorative features have been covered with movable wooden panels.

The basement of the mansion, which once housed the kitchen and
ancillary rooms, now accommodates the offices and services of the MCA. At the
far end of the garden, to the right of the main entrance, is an out-building
which was the carriage house, stable, and servants’ quarters. This property
does not belong to the MCA and houses public services.

Ziller’s original signed plans of the Stathatos Mansion are kept
in the National Art Gallery in Athens, while facsimiles are part of the MCA
collection. 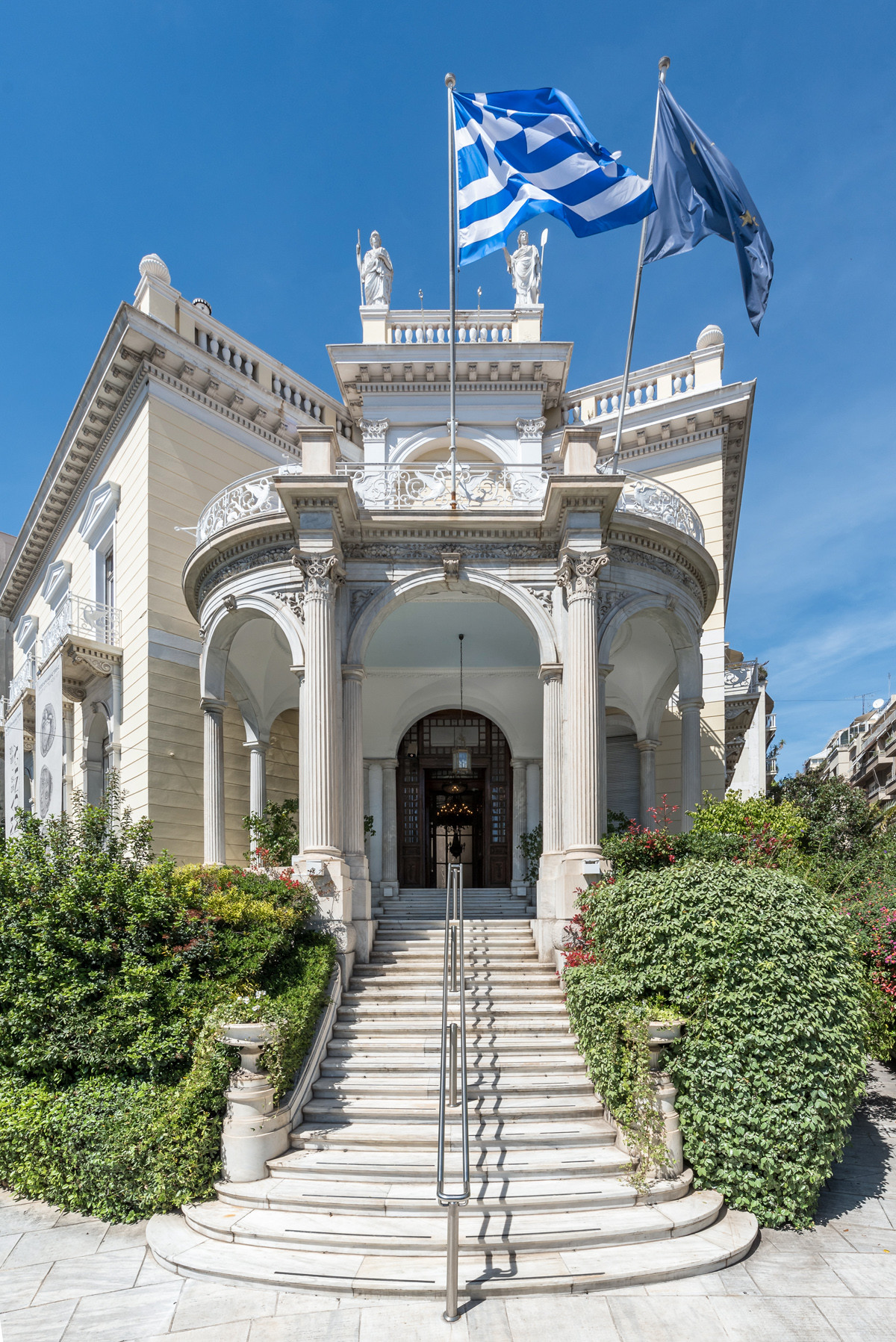 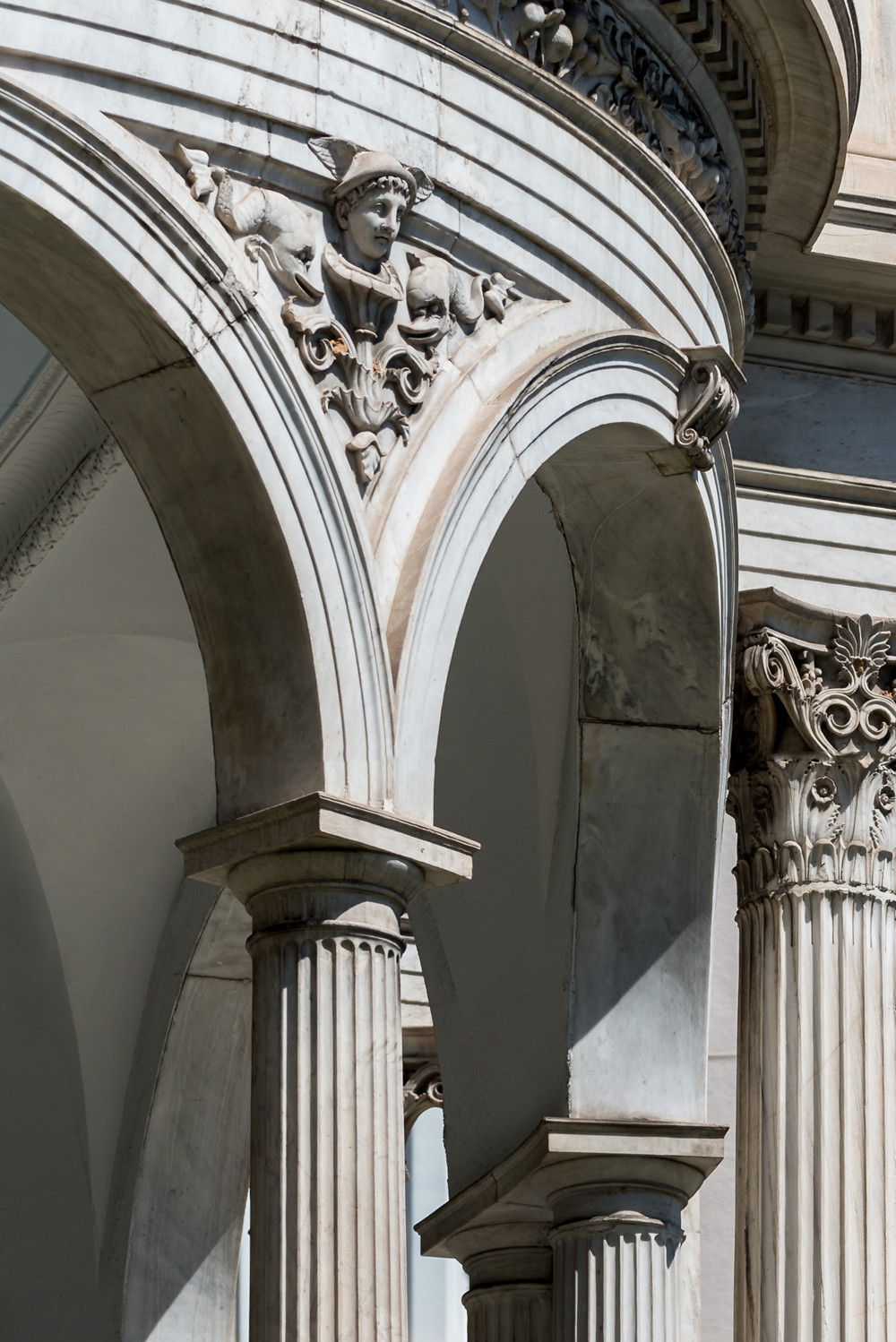 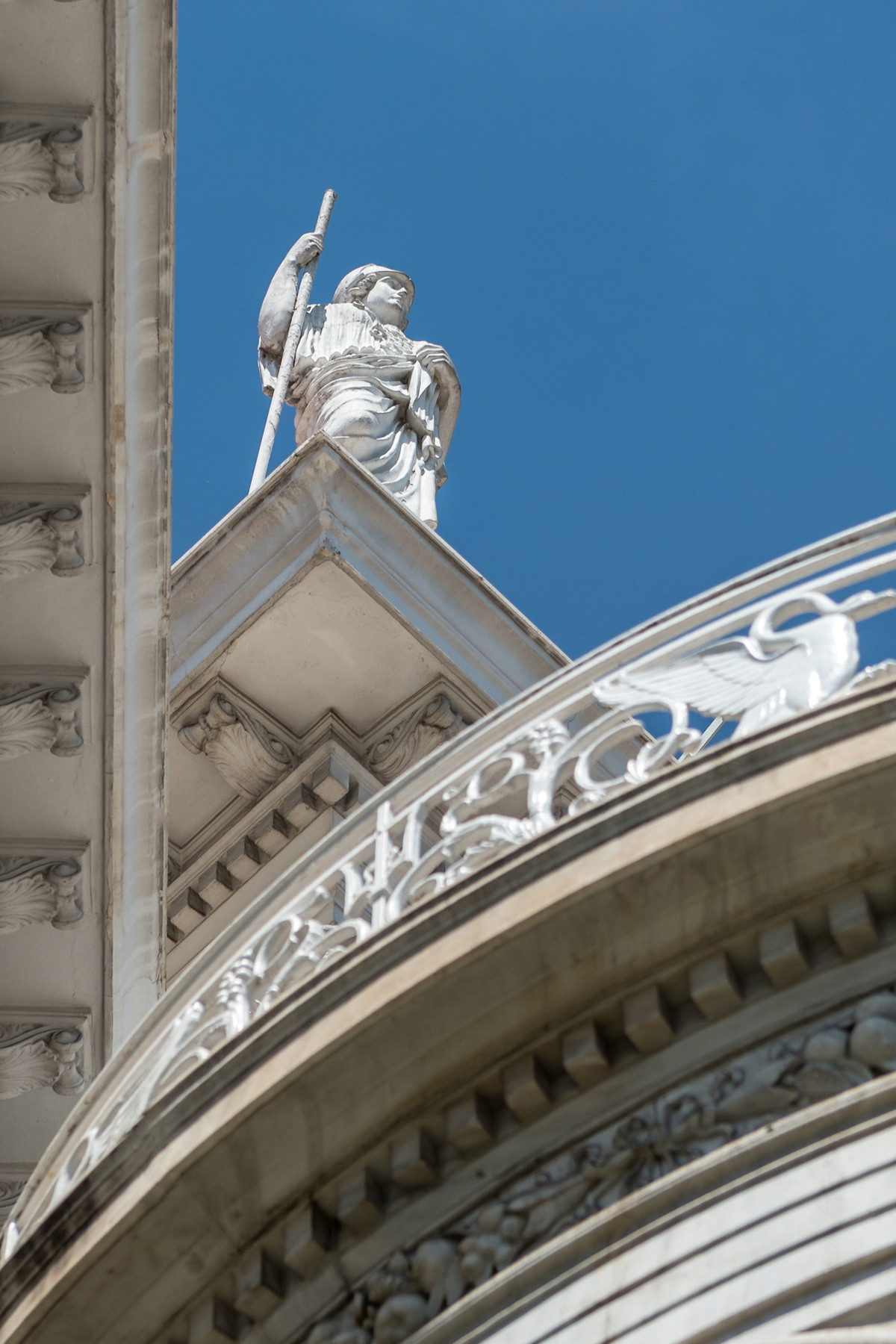 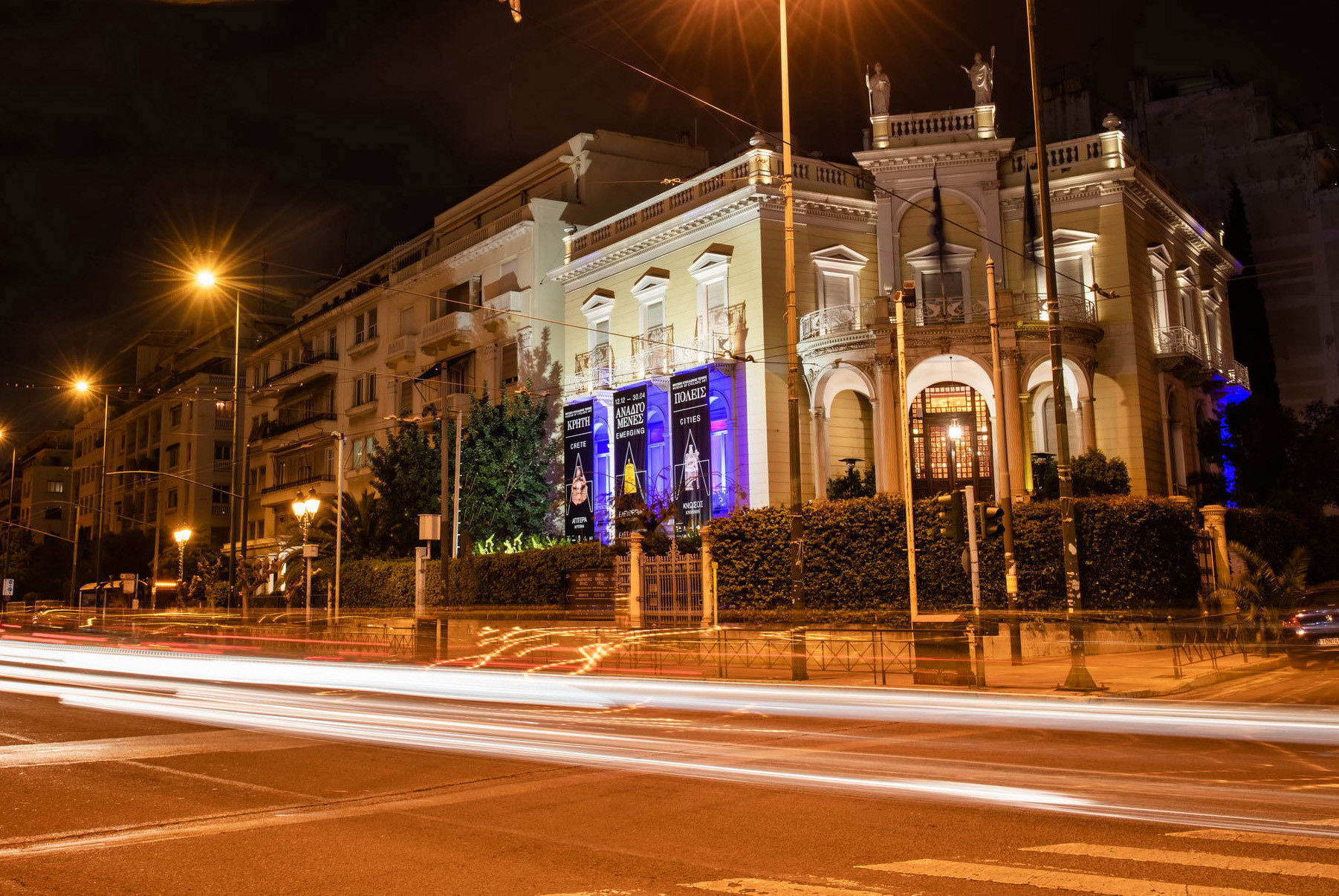 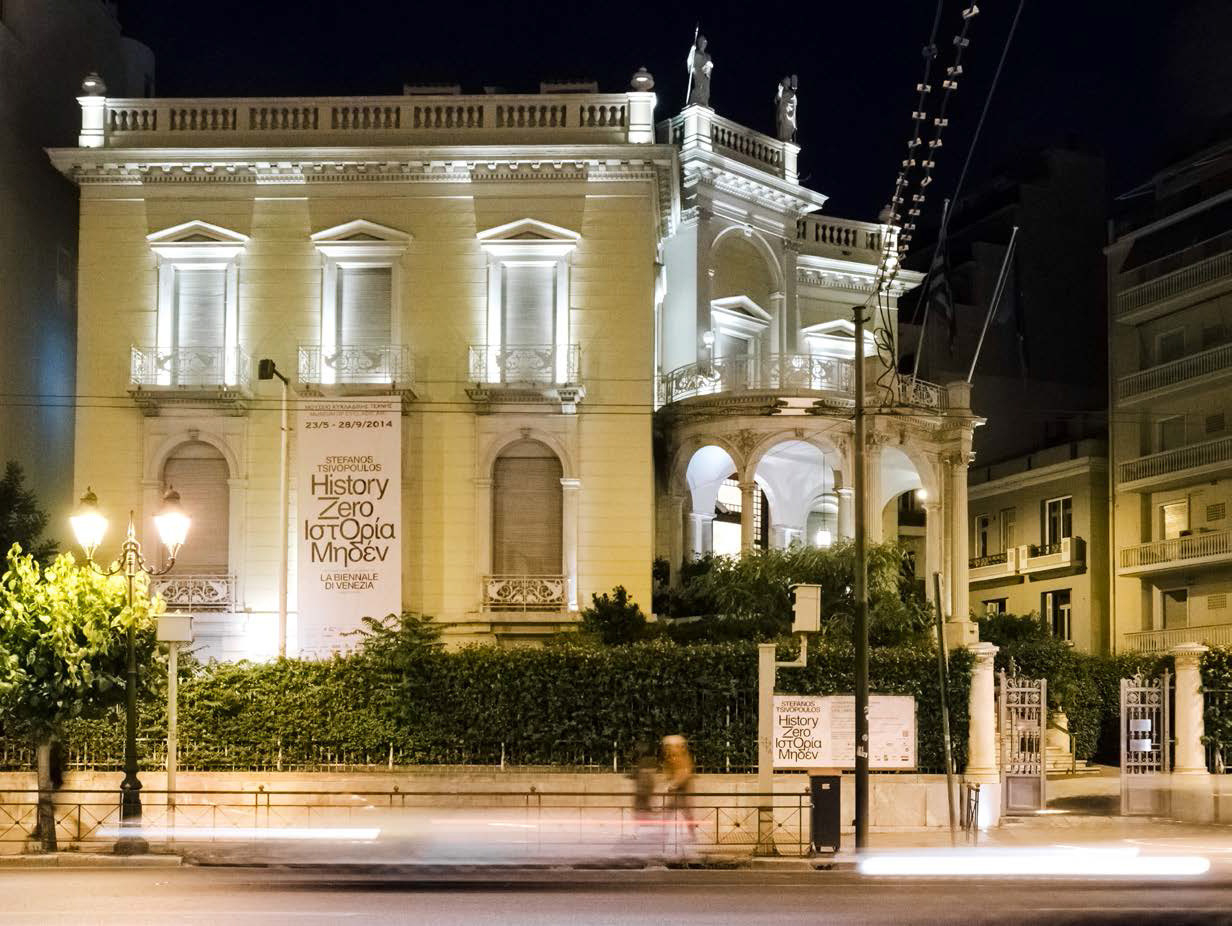 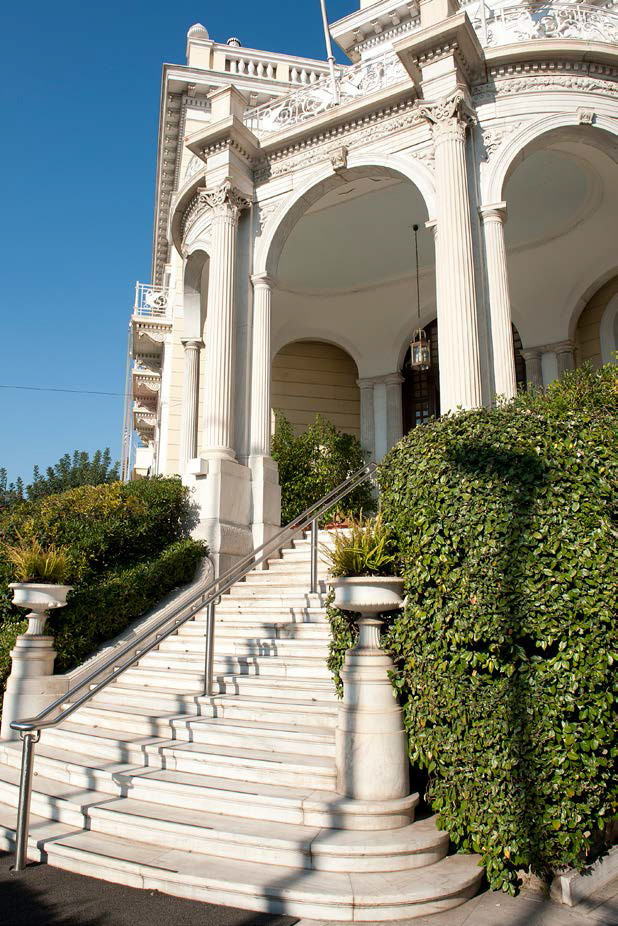 The Main Building, at 4 Neophytou Douka str., was built in 1985 by the architect Ioannis Vikelas to house the permanent collections of the MCA.

Ιts façade combines marble and glass, conveying the sense of austerity and the diffusion of refracted light that predominate in the Cycladic landscape. The interior is distinguished by simple lines and a modern aesthetic, as well as the use of materials encountered in the Cyclades, such as marble and granite. The builidng has 4 floors with galleries, occupying in total approximately 2,300 sq. m., storerooms, workshops, and offices.

From the entrance, the visitor can approach the museum shop (extending into the basement) and the atrium, where the museum cafe is situated. From the atrium, a corridor leads to the Stathatos Mansion. On the ground floor, the visitor comes across introductory wall texts with useful information about Cycladic art. 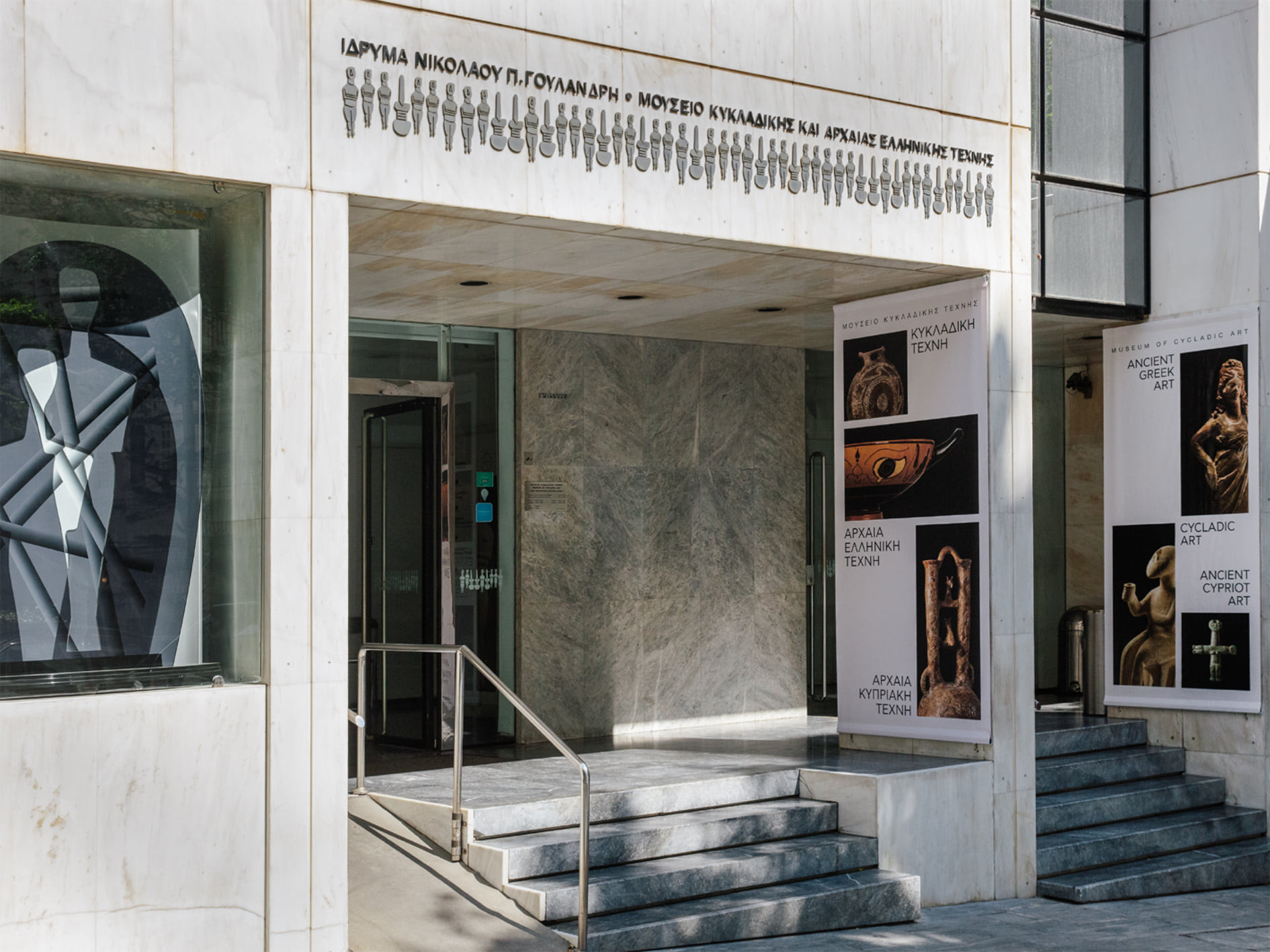 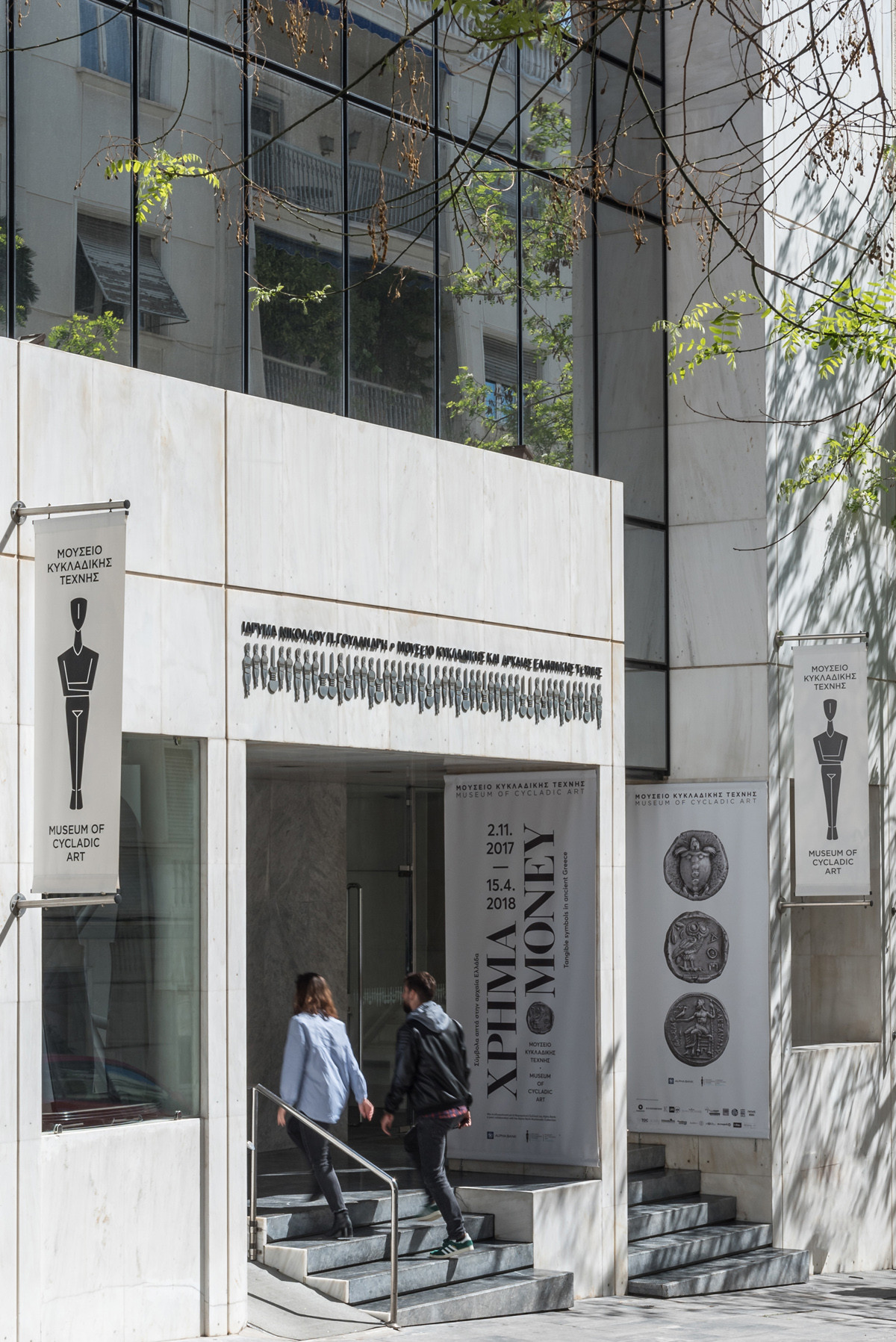 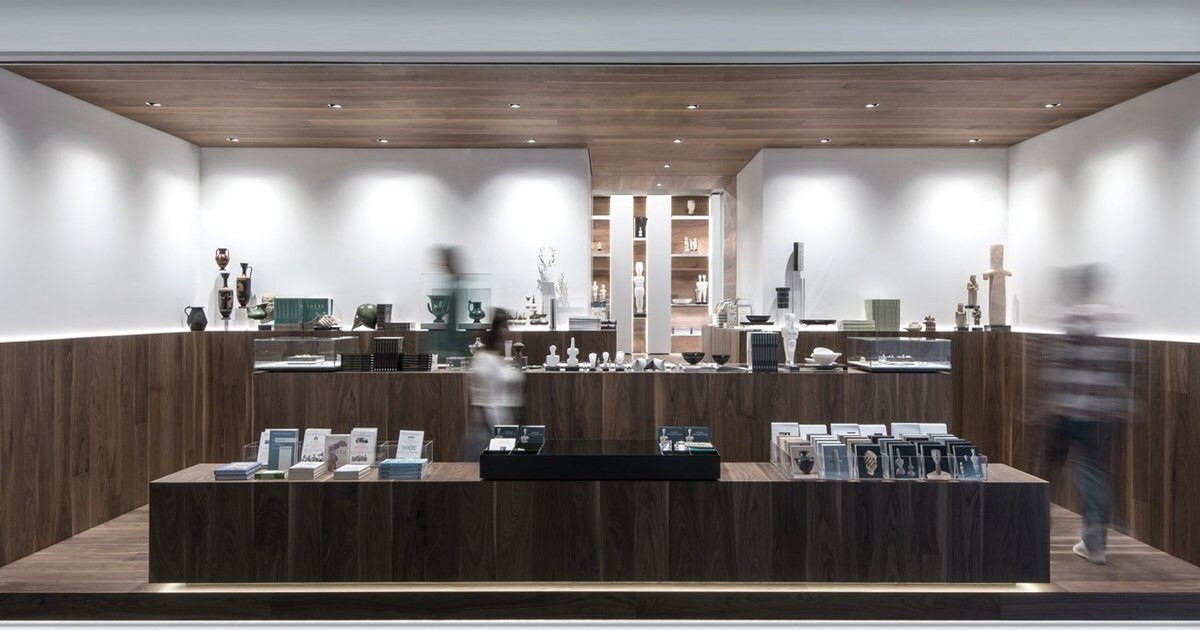 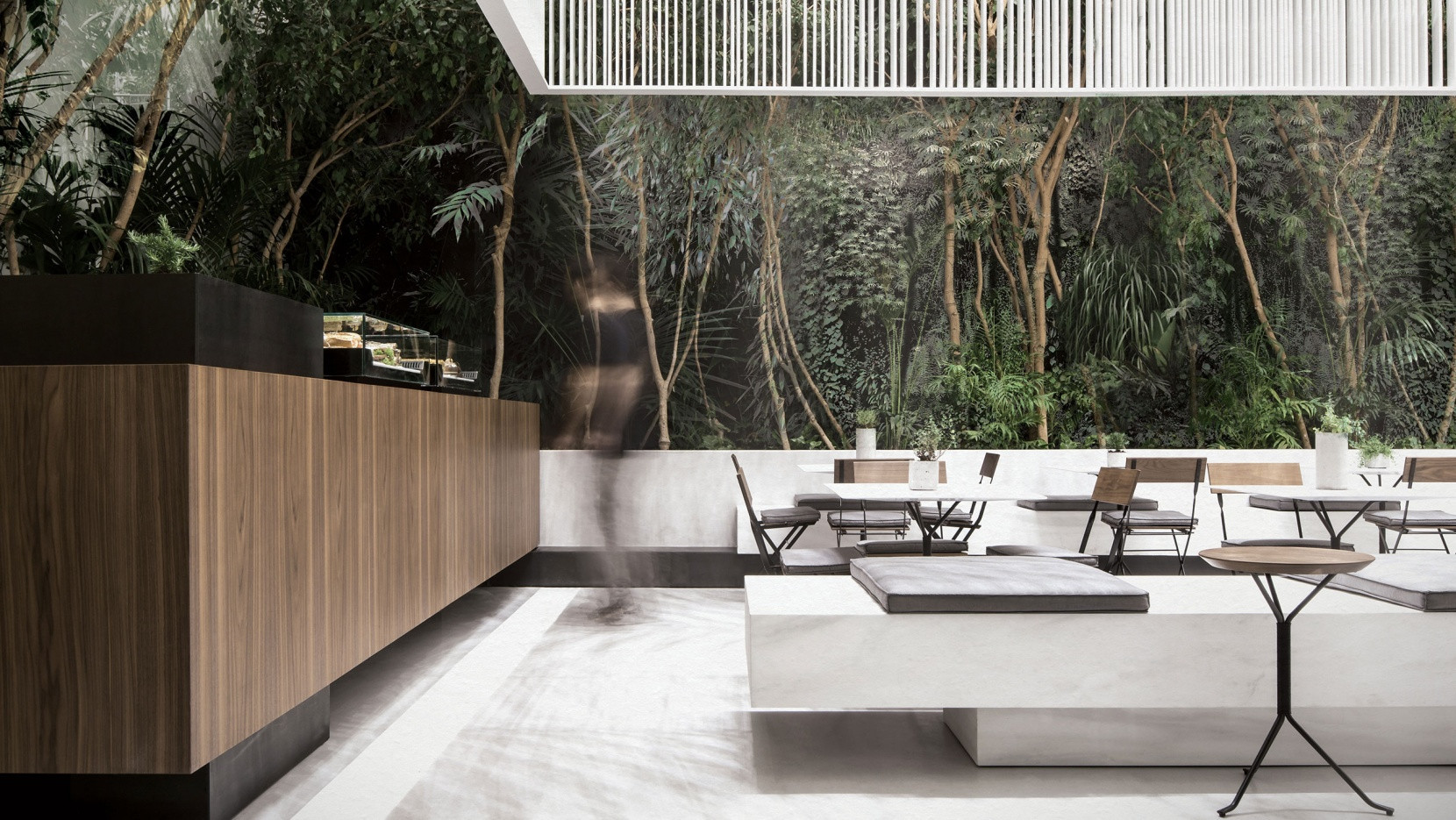 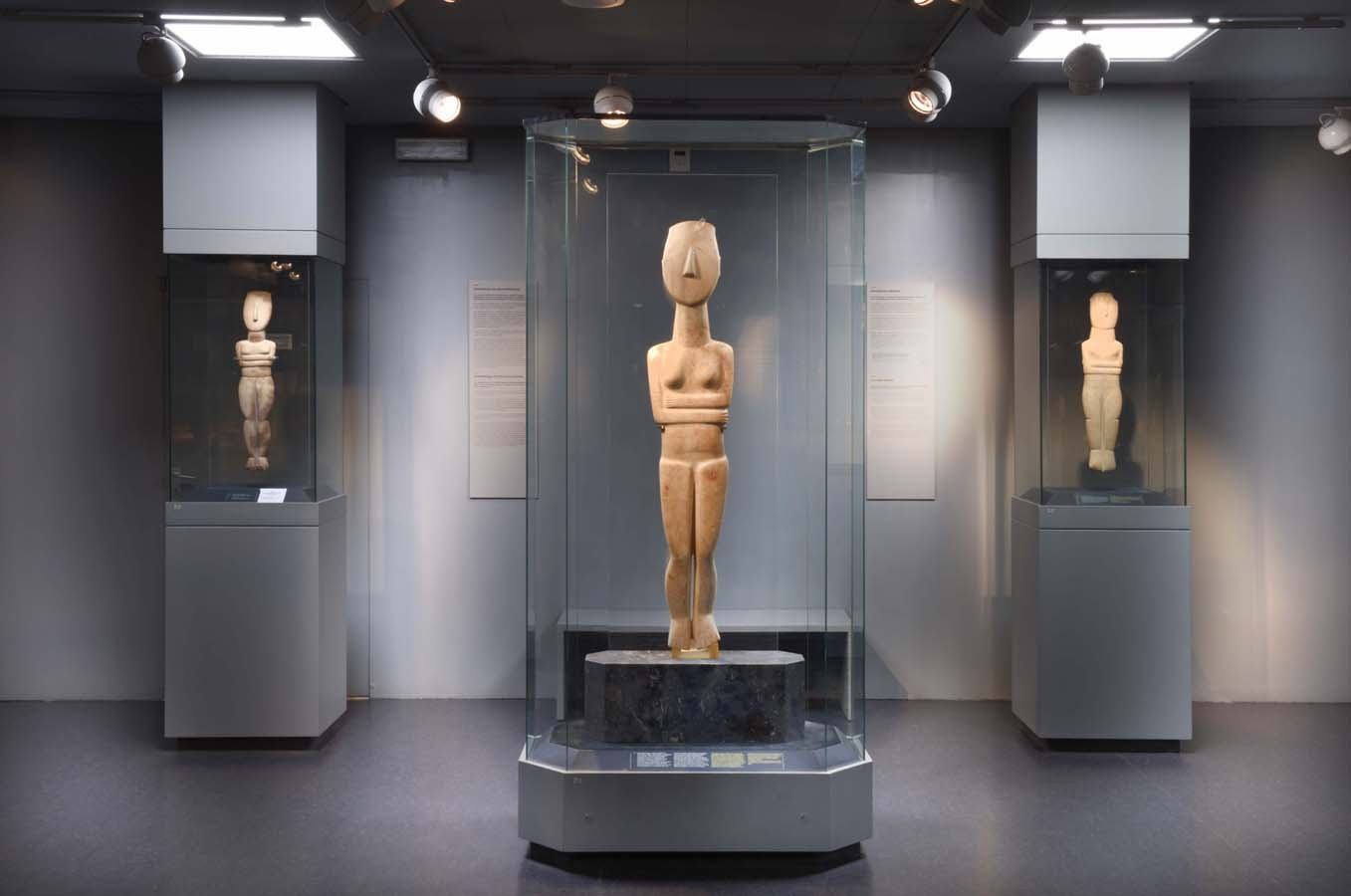 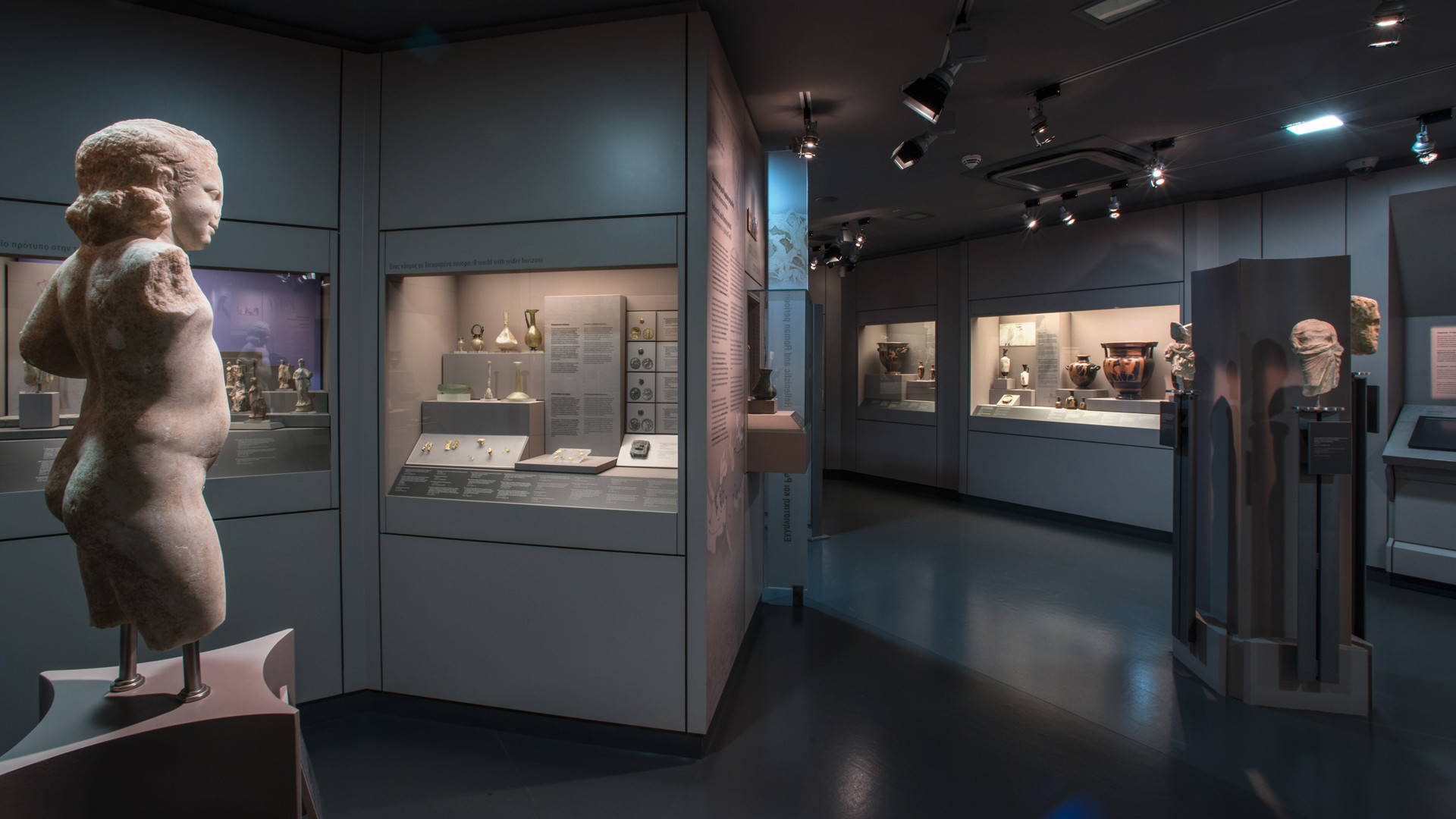 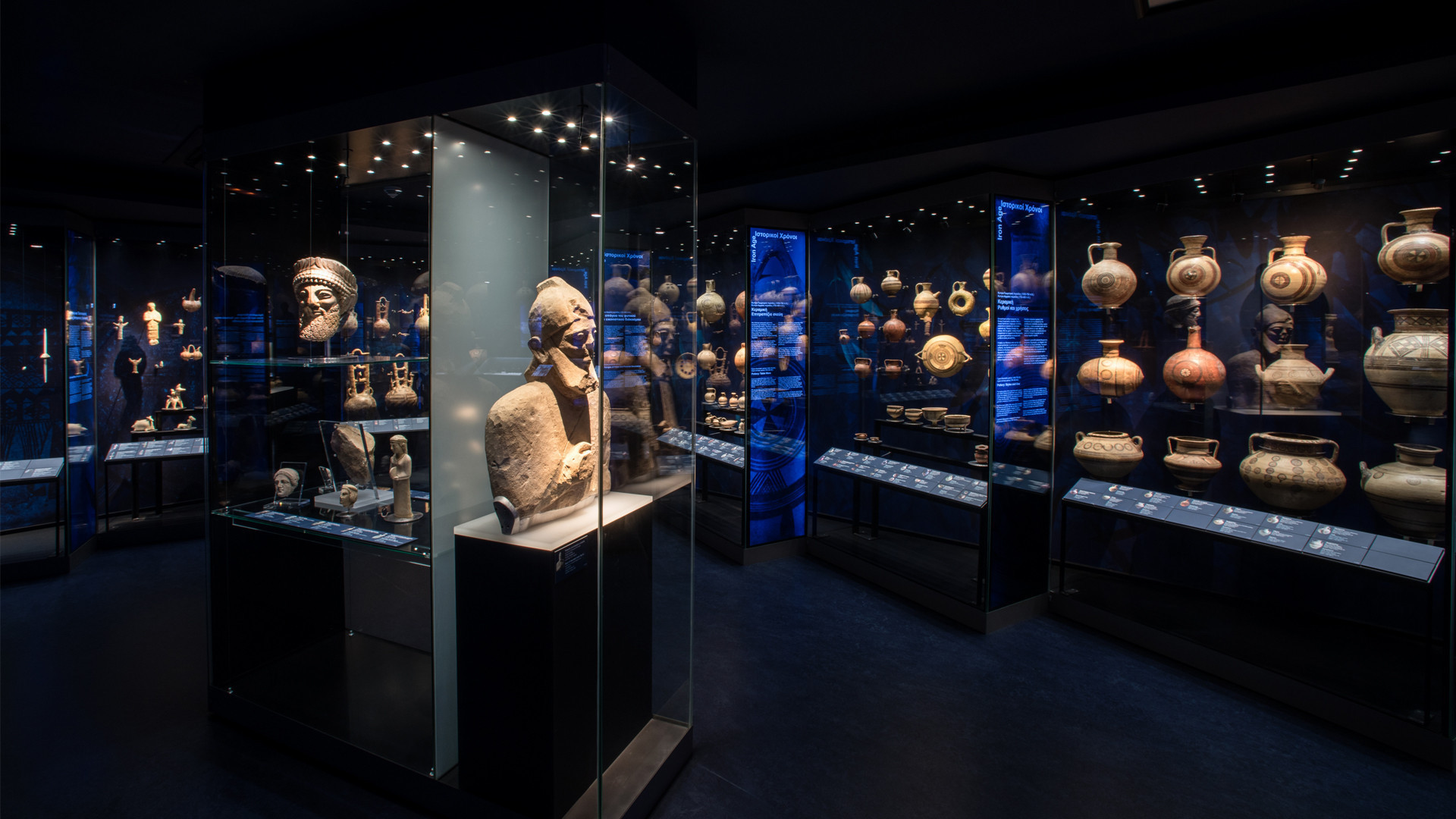 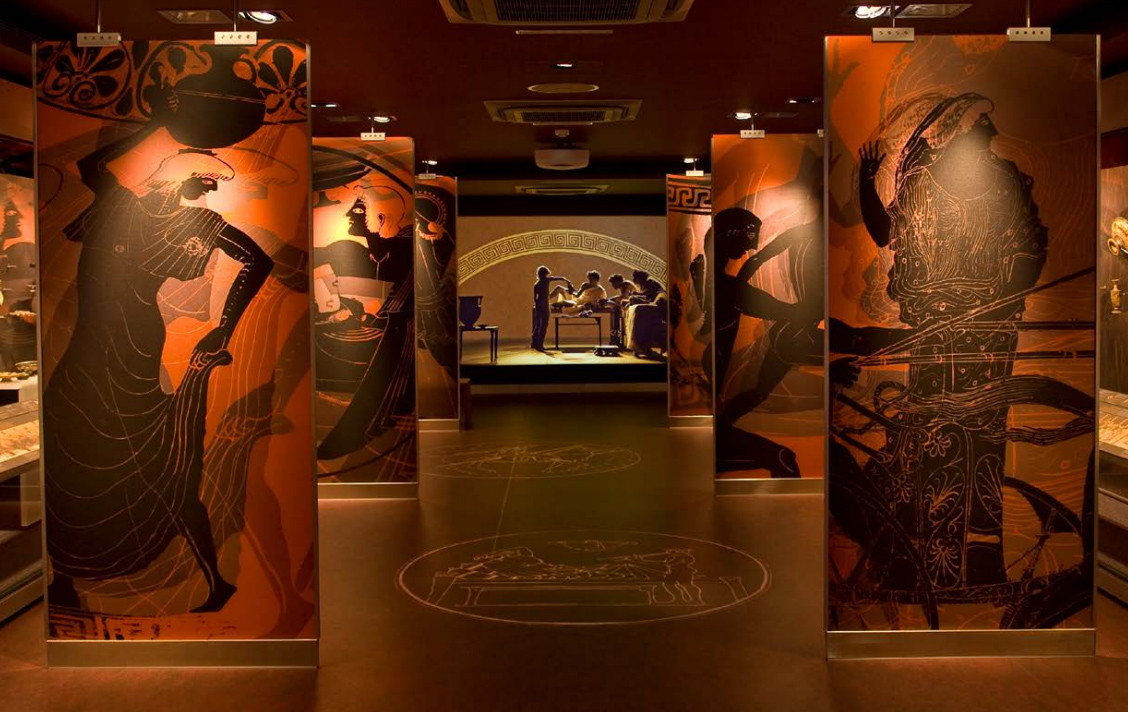 8/8 Scenes from daily life in antiquity 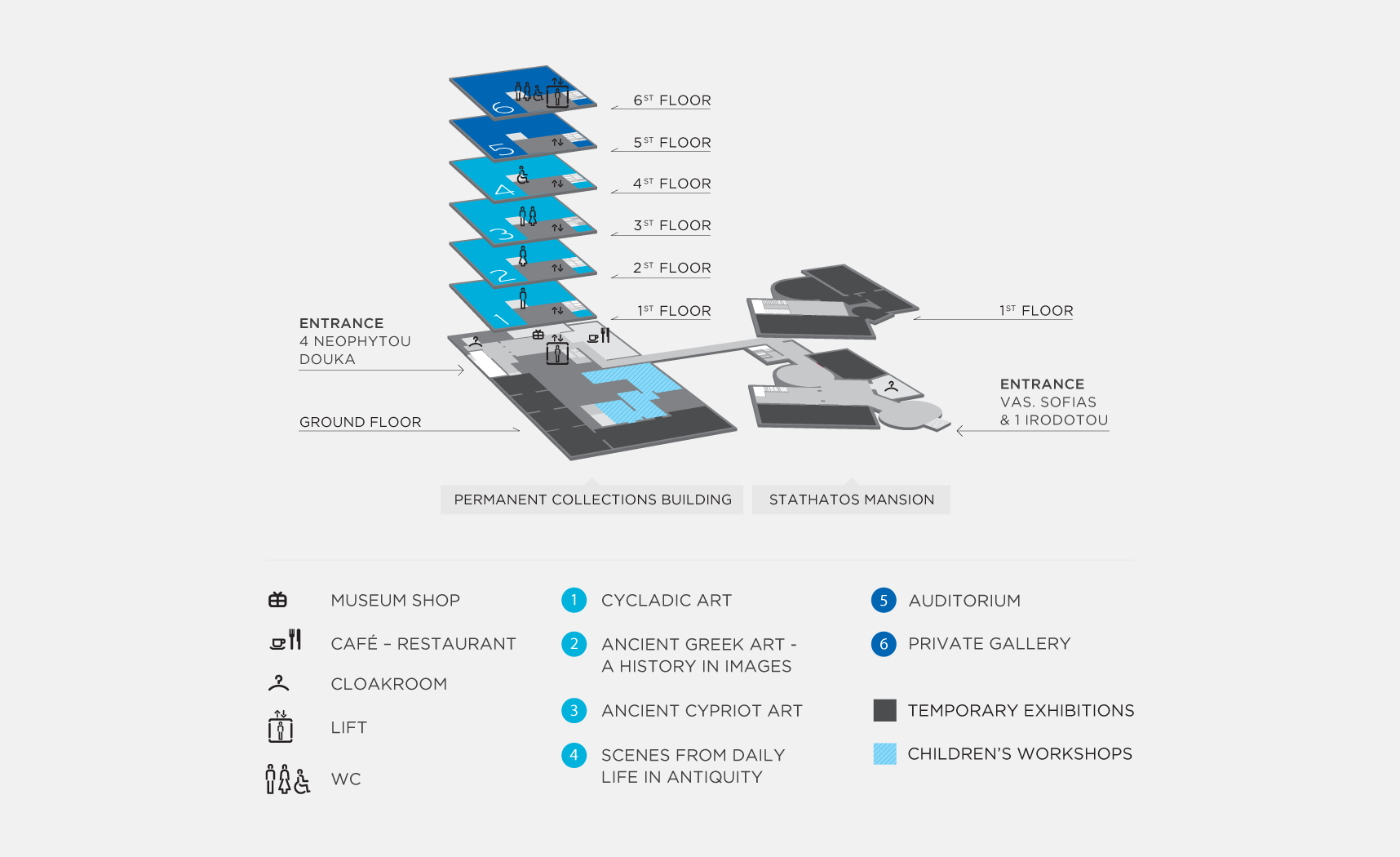