El Greco and his Workshop

The concept
The exhibition focused on El Greco’s workshop in Spain and its impact on 17th century Spanish painting. It included paintings made by the master himself, his students Jorge Manuel Theotocopuli (1578-1631) and Luis Tristan (ca. 1585-1624) and other artists who were affiliated with or influenced by his workshop.

Two or more versions of each iconographic theme were presented: the original, made by El Greco himself, and copies, produced by his students. In addition, there were some paintings that are considered “collective works”. In that way, visitors were able to trace the distinct style of each student and detect the influences exercised by the master. Radiographs helped visitors follow the various stages in the creation of a painted composition.

The exhibition addressed also the issue of authenticity. El Greco has been extensively forged in the 20th century. Modern technology allows for the detection of fakes, but as some collectors and museums refuse to test their Greco paintings, controversy over the authenticity of a considerable number of works is sustained. Visitors had the chance to view one painting that has been proved to be a modern forgery.

The exhibits
Altogether, 58 paintings were presented in the exhibition. They came from major museums

Of these, 8-10 paintings are almost certainly attributed to El Greco himself. 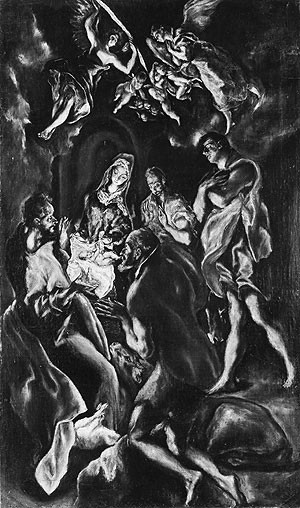 Nicos Hadjinicolaou
Professor Emeritus of the University of Crete