At its height, Greek culture was disseminated all over the Mediterranean and a good part of the ancient Near East. Its cradle, however, is found in the Aegean. This closed sea that covers an area of approximately 200.000 sq/km and separates mainland Greece from Asia Minor was a major route of trade in antiquity and a place of creative encounters between the east and the west. 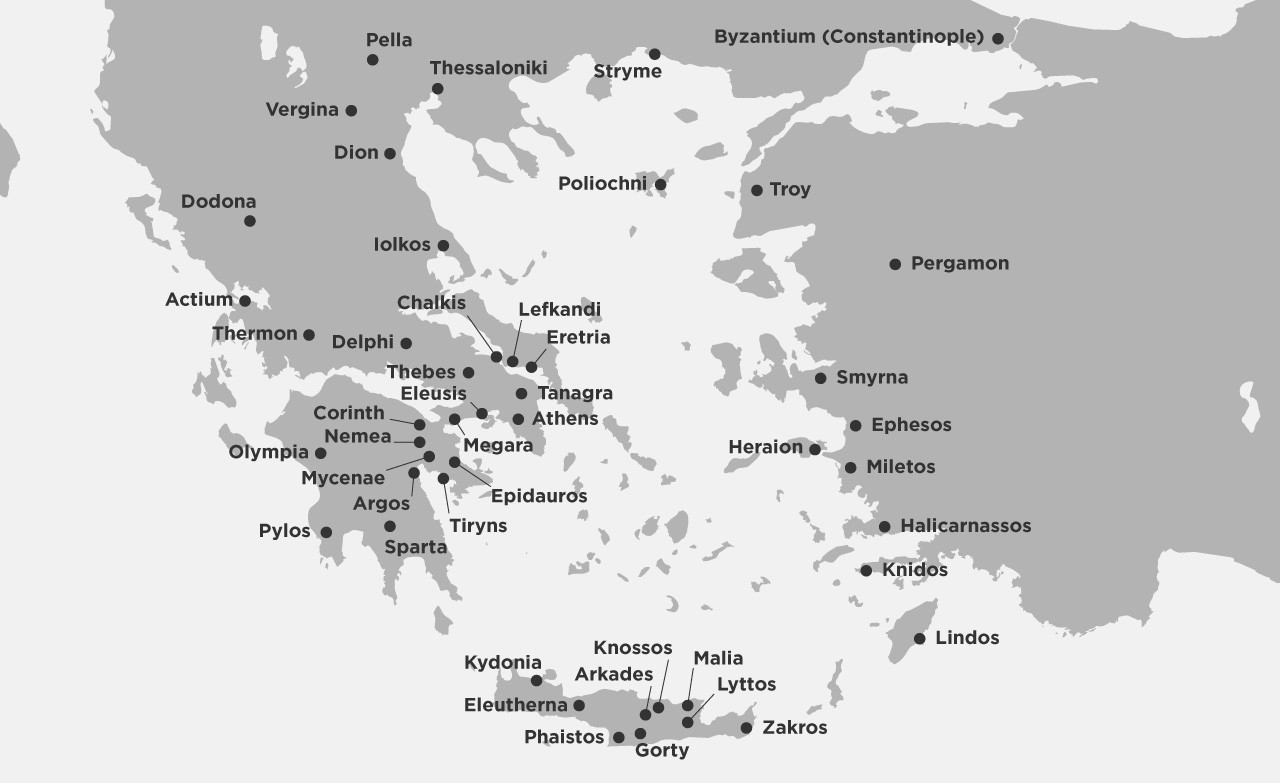 Apart from the extensive plains of Thessaly and Macedonia – which were not systematically exploited in antiquity – there were only a few areas with sufficient arable lands to support urban populations, namely the small but fertile alluvial plains opening among the mountains. Those areas provided the most favourable settings for ancient habitation. Large parts of the population were concentrated in such valleys, organized in small, politically independent settlement units, some of which evolved into autonomous city-states (e.g. Athens, Megara, Thebes, Argos, Sparta). Availability of arable lands and proximity to the sea were deciding conditions for the establishment of a settlement in a particular site. However, other factors were considered, too: security, access to water resources, as well as the ability to control major communication routes (see, for example, the cases of Corinth in the Corinthian gulf, Eretria and Chalkis in the Euboean gulf).

Comparable environmental conditions led to similar responses on the other side of the Aegean, too. Large mountain ranges separate the coastline from inner Anatolia and many ancient settlements are spread along the coast, usually close to estuaries and fertile valleys (e.g. Troy, Smyrna, Ephesos, Miletos, Halicarnassos, Iasos).
The fact that the most important Greek cities are to be found in the eastern part of mainland Greece is not only related to the configuration of the terrain and the proximity to the Aegean Sea; climatic reasons were also responsible. The moderate, dry climate prevailing east of the Pindus mountain range favours the cultivation of cereals, legumes, and vegetables. This is sharply contrasted to the western part, where increased precipitation makes control of production a difficult and hazardous task.

Ancient Greek economy was based on agriculture. However, the overall lack of extensive arable areas did never allow large-scale production. Grain shortages were a constant problem for Greek cities and the islands, which they tried to solve with imports from overseas (Thrace, the Black Sea, and even Egypt).

Timber was also scarce. Despite the mountainous relief, Greece has only a few forests with timber suitable for the construction of buildings and ships. Being heavily dependent on shipping and, at the same time, particularly active in constructing monumental temples and other public buildings, Greek cities frequently had to import timber from Asia Minor or the Levant.

Mineral wealth was equally limited. Apart from considerable deposits of iron ores, Greece had only a few economically viable metal resources: lead-silver ores at Laurion in Attica and Siphnos in the Cyclades, copper sources at Laurion and the island of Kythnos, and rather limited amounts of gold at Mt Paggaion, Thasos and other Macedonian and Thracian areas. These resources were intensively exploited, yet the constant need for metals (vital for the production of tools and weapons) led to shortages that made imports a necessity.

The Aegean Sea as a major Route of Trade

Under such conditions, maritime trade provided the basic means for Aegean societies to acquire indispensable commodities. The sea also offered ways out of demographic and economic crises. During the 8th and 7th c. BC, for example, such a crisis led to the migration of populations to unoccupied lands overseas, where they established Greek colonies. The Aegean, with its dry climate and relatively temperate winds offered ideal conditions for navigation. The more than 500 islands that are scattered on its surface (with a total perimeter of approximately 7000 km) and the crenelated coastlines of the surrounding land masses (5000 km. in total length) offered plenty of good harbours for the development of coastal navigation from a very early stage of history.

It does not come as a surprise that maritime trade played a crucial part in the development of ancient Greek cities. The rugged terrain of mainland Greece – divided by large mountain ranges – was not suitable for land transportation nor could it support large-scale agriculture. As a result, Greece was unable to create the necessary conditions for the rise of unified political regimes based on extensive agricultural economies, such as those seen in Mesopotamia and Egypt. A mixed system of small-scale farming and commercial enterprise was the only viable response to the limitations of the Greek landscape.

The Aegean offered easy access to almost any area of their known world: to the East through Crete, the Dodecanese, and the southern Anatolian coast; to the Black Sea through the islands of Skyros and Lemnos and the area of Troy; to the West through the Corinthian gulf and the Ionian islands.

The establishment of colonies from southern France to the Levantine coast and the subsequent development of commercial relations with those areas were of crucial importance. Already from the 7th c. BC, Greek presence is attested throughout the eastern and central Mediterranean, and from the 5th c. BC onwards Athens and other Greek cities are among the leading commercial powers in the Mediterranean.
In that way, Greeks managed to ensure the constant flow of goods necessary for the development of a viable economy. At the same time, they came in contact with most cultures of the ancient world. By assimilating new ideas and stimuli from such encounters, they created a civilization renowned for its wealth, originality, and expressive power. The role of the sea in that process is inestimable. Maritime transport was the primary means of trade in ancient times.