Jannis Kounellis exhibits a new and site specific work at the Museum of Cycladic Art. It is the first solo exhibition in Greece after many years, housed at the Stathatos Mansion, the neoclassical wing of the Museum.

The exhibition runs from 5 April to 30 September 2012. Jannis Kounellis, whose contribution to the international art movement of Arte Povera has been defining, left Greece very young to leave behind the trauma of the civil war. He now returns to create a work amidst the economic and social crisis that Greece is currently going through. Kounellis's installation can only be a response to this turmoil, as he puts it, “at this particular moment it would be impossible to have just an exhibition of art in Greece”.

For his exhibition at the Museum of Cycladic Art, Kounellis uses materials found in the local Athenian markets and junkyards. These objects carry the history of the place, of a city that has been through endless changes of populations, ideologies, and levels of prosperity and in the last few years some very extreme changes. Kounellis uses newspapers, coal, burlap sacks, old shoes and glasses, overcoats, soil and iron bars for this pieces, which are spread in the spaces of the
neoclassical building.

The same objects carry personal memories and they can be symbols of desires and hope but also of failed dreams and aspirations. In Kounellis’s work the personal history and the history of the place, the city, are equally important.

The black overcoats that appear repeatedly in his work can represent the artist, the viewer, but also the ‘little guy’, Chaplin’s tramp of our times, who gets trampled over while societies change. The works might reflect current problems but as always in Kounellis’s works, even though the objects have their own history, they are incorporated in his installations in such a way that in the end they become universal, ancient and modern. 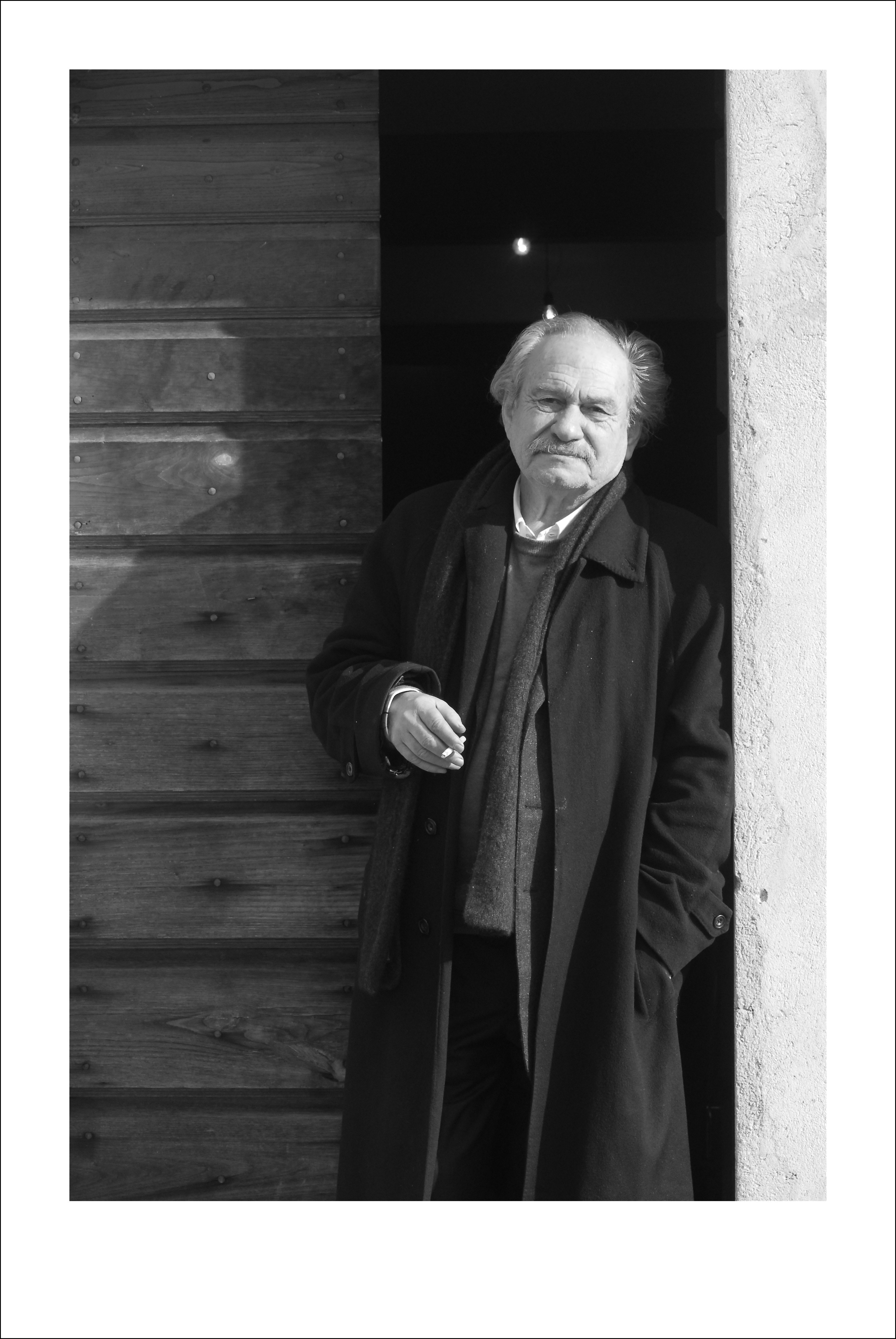 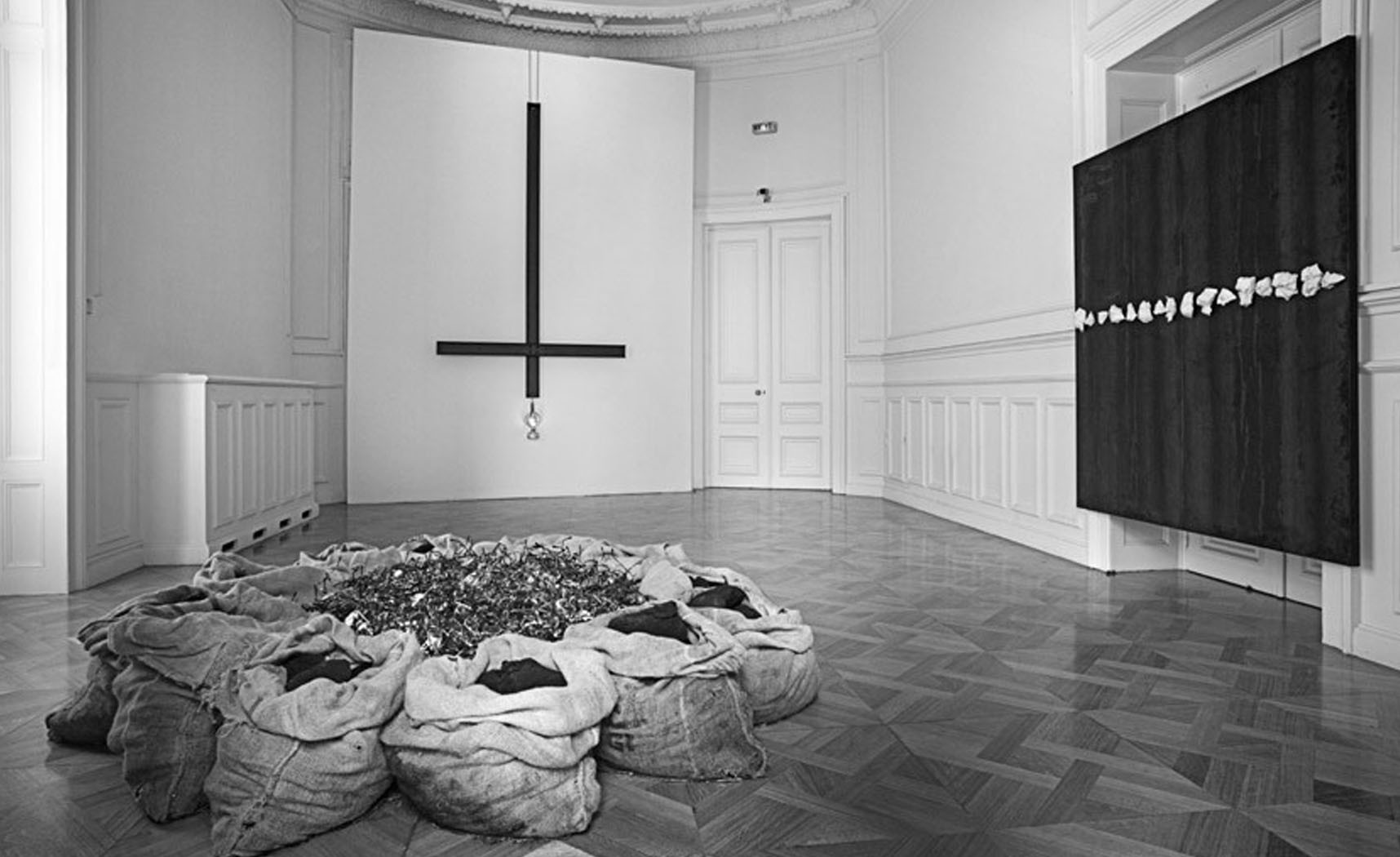 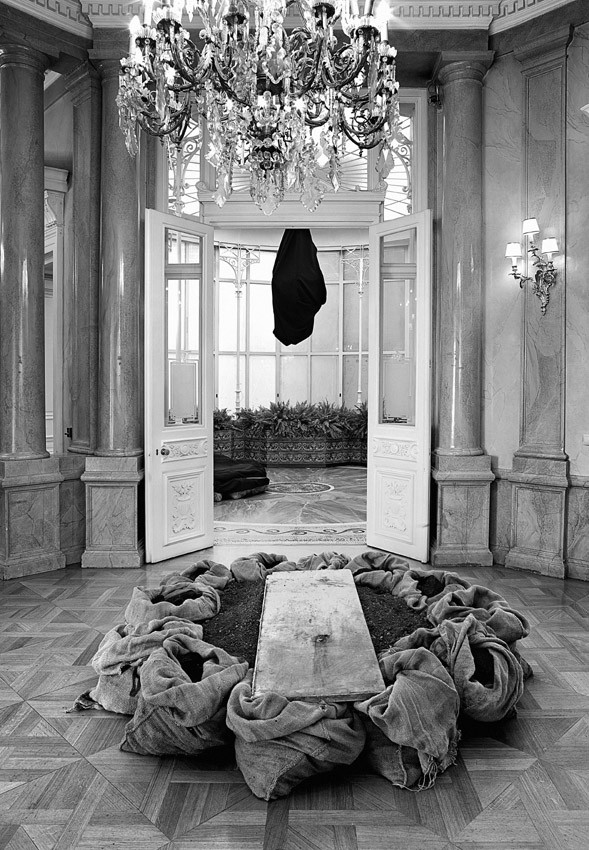 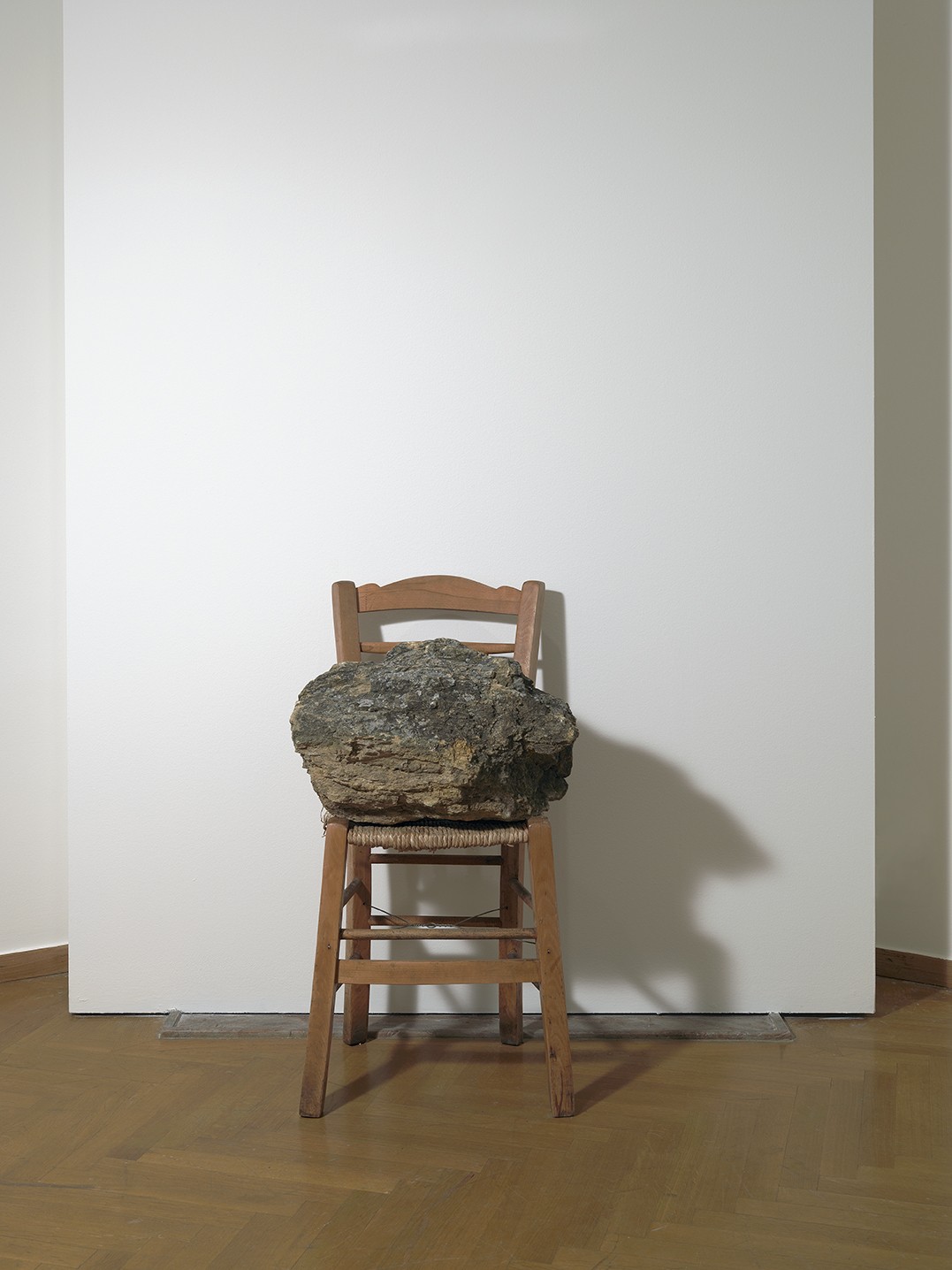 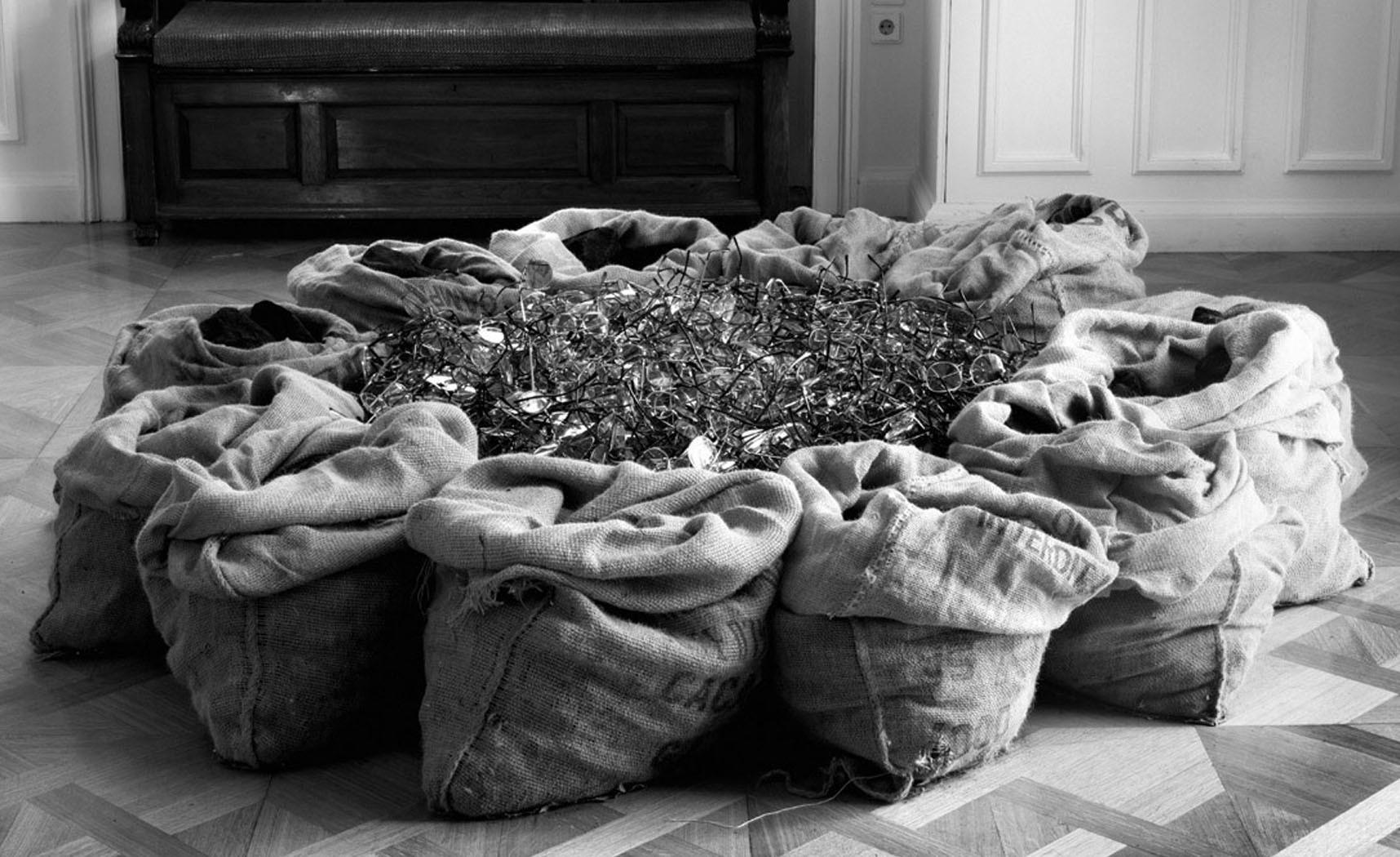 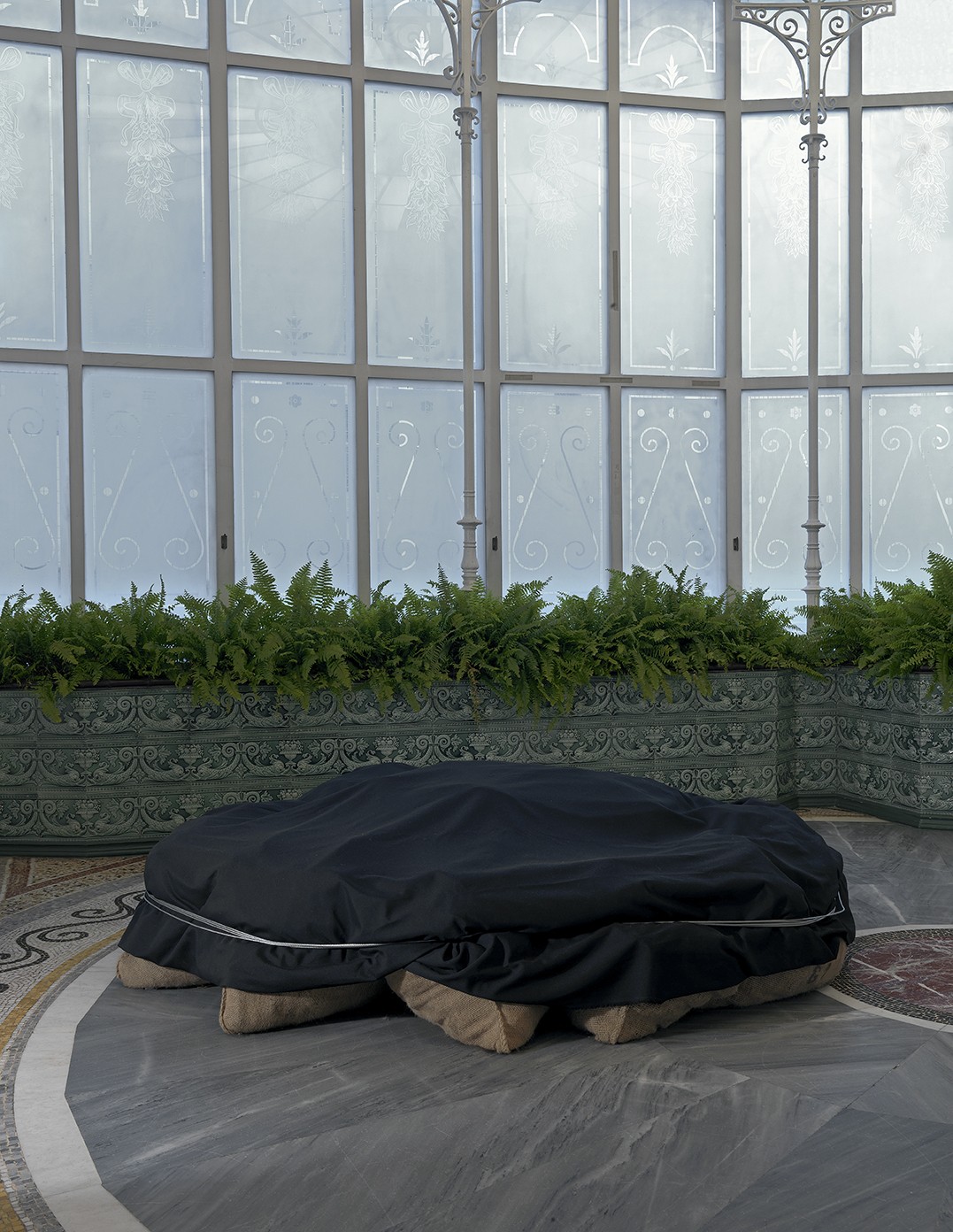 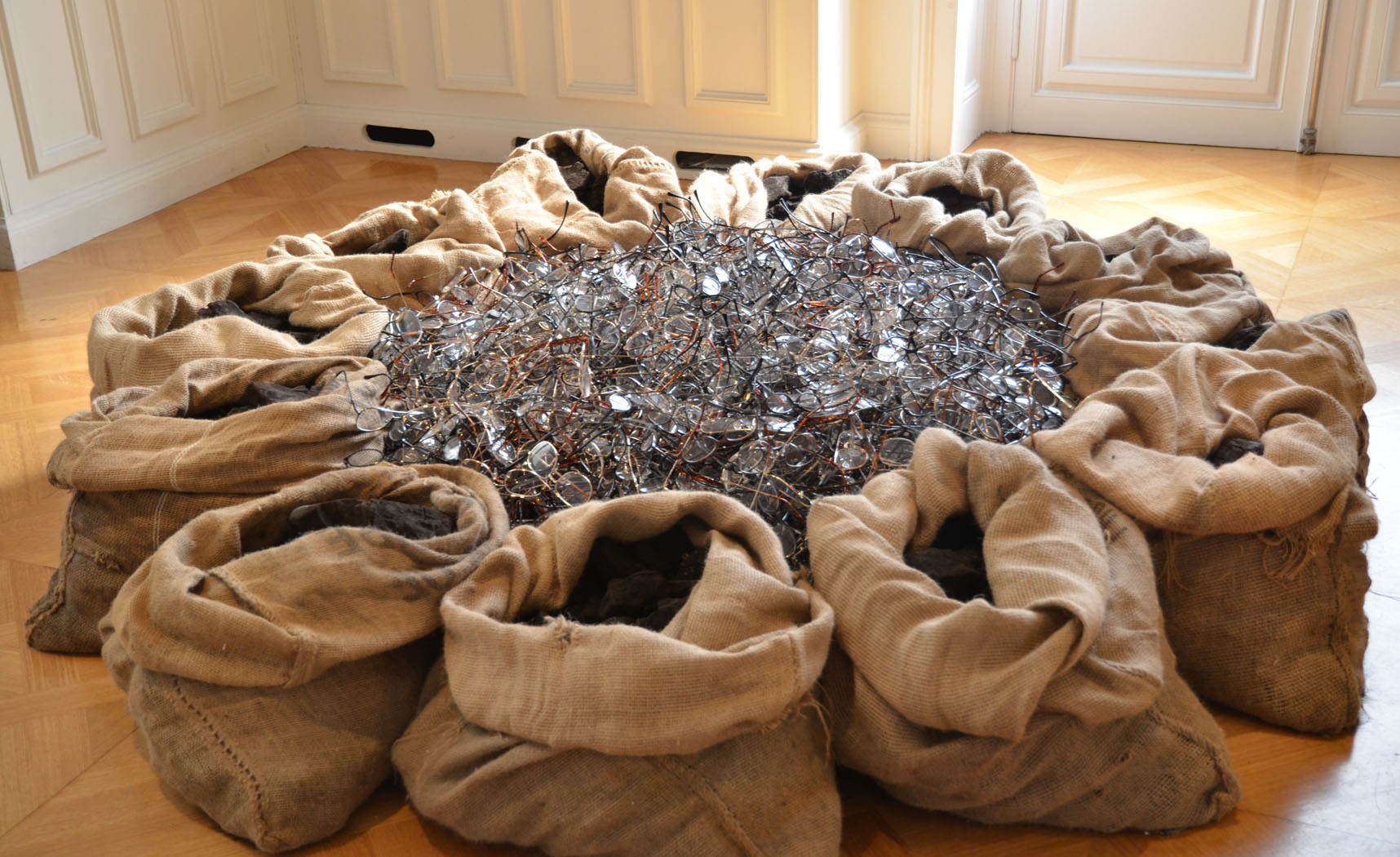 Born in Piraeus, Greece in 1936, Kounellis moved to Rome in 1956 and is now considered as one of the most important artists of the Arte Povera movement. Αs coined by curator Germano Celant, the term Arte Povera refers to the humble materials that Kounellis and others such as Boetti, Calzolari and Merz used in their work. Arte Povera was not a group of artists using a certain style; what the artists had in common was the open-ended experimentation, working outside formal limitations. The Arte Povera term did not refer to impoverished materials, but to art made without restraints, with found objects.

Already by the early 1960s, Kounellis was using found elements like steel, stones, burlap, coal and knives.  He replaced the canvas with bed frames, doorways, windows and coat racks. The scale was always a reference to the human body: the size of a double bed or a window are dimensions repeated throughout his work. He used even live animals, like the famous installation of live horses in Rome in 1969, in which he attempted to question the established art environment. He used fire, earth, and gold, for their alchemical symbolism.  He used coffee and coal as allusions to commerce and the economics of trade but also as elemental objects of Pireaus, the port where he grew up. Kounellis has used old shoes and coats but also fragments of replicas of ancient sculptures to refer to the complicated and conflicted layers of identity.

Kounellis has had major retrospectives and his work has been shown in important museums all over the world:

In Greece his most recent show in a museum context took place in 2004 at the National Museum of Contemporary Art in Athens. In 1994 Kounellis created an important retrospective installation of 30 years’ work on the cargo-ship Ionion at the Athenian port of Piraeus, organised by the J.F Costopoulos Foundation.  He also participated in the group show ‘Outlook’ curated by C. Ioakimides in 2003 at Technopolis, Athens. From 1976 to date Kounellis has had several solo shows in Athens at gallery Bernier/Eliades.

WITH COLLABORATION OF
Greek festival

WITH THE KIND SUPPORT OF
Contemporary art Support Committee