For the first time, 27 works by Cy Twombly inspired by Greek mythology and his close ties with Greece, are presented alongside 12 ancient artworks, revealing a unique and original dialogue between ancient Greek and contemporary art. The exhibition includes representative drawings and sculptures by the contemporary artist, such as Venus (1975), Pan (1975), Nike (1981), Apollo (1975), Dionysus (1975), Orpheus (1979), Aristaeus mourning the loss of his bees (1973) and Aphrodite Anadyomene (1979). These works will “converse” with a series of ancient artworks such as the Torso of Aphrodite Anadyomene from the Archaeological Museum of Paphos, the Relief with representation of Orpheus, Eurydice, and Hermes from the National Archaeological Museum of Naples, the Statue of Dionysus from the Archaeological Museum of Eleusis, the Statuette of Apollo and the Figurine of winged Nike from the National Archaeological Museum of Athens.
_____

Cy Twombly‘s fascination with Greece is well known. Even though he first visited the country during the summer of 1960, Greek mythology takes an important place in his oeuvre already since the late 1950s. But it was only in the 1970s that he explored the Greek history and mythology in depth, culminating with his masterpiece, the cycle Fifty Days at Iliam (Philadelphia Museum of Art). He painted this work over the summers of 1977 and 1978 in his studio in Bassano in Teverina, north of Rome.

Twombly’s response to that decade’s disdain for painting was to transform it into writing, as in the famous large drawings Venus and Apollo, 1975 or the later, monumental Orpheus drawings, 1979. In his artworks -both in drawings and sculptures- he frequently alluded to the Olympian gods, from the major figures of Aphrodite, Apollo and Dionysus, to Nike, Pan, or Aristaeus.

A special place at the very core of the exhibition holds an unexpected visitor: the famous François Vase, also known as the Kleitias and Ergotimos Krater, a milestone in the development of ancient Greek pottery and vase painting, which travels for the first time outside Italy, from the Archaeological Museum of Florence. It has been said that the François Vase is so unique that, even if all other ancient Greek vases were lost, it alone could illustrate Greek mythology and the code of Archaic Greek art.

**Τhe exhibition is made possible thanks to the kind support of the Cy Twombly foundation. 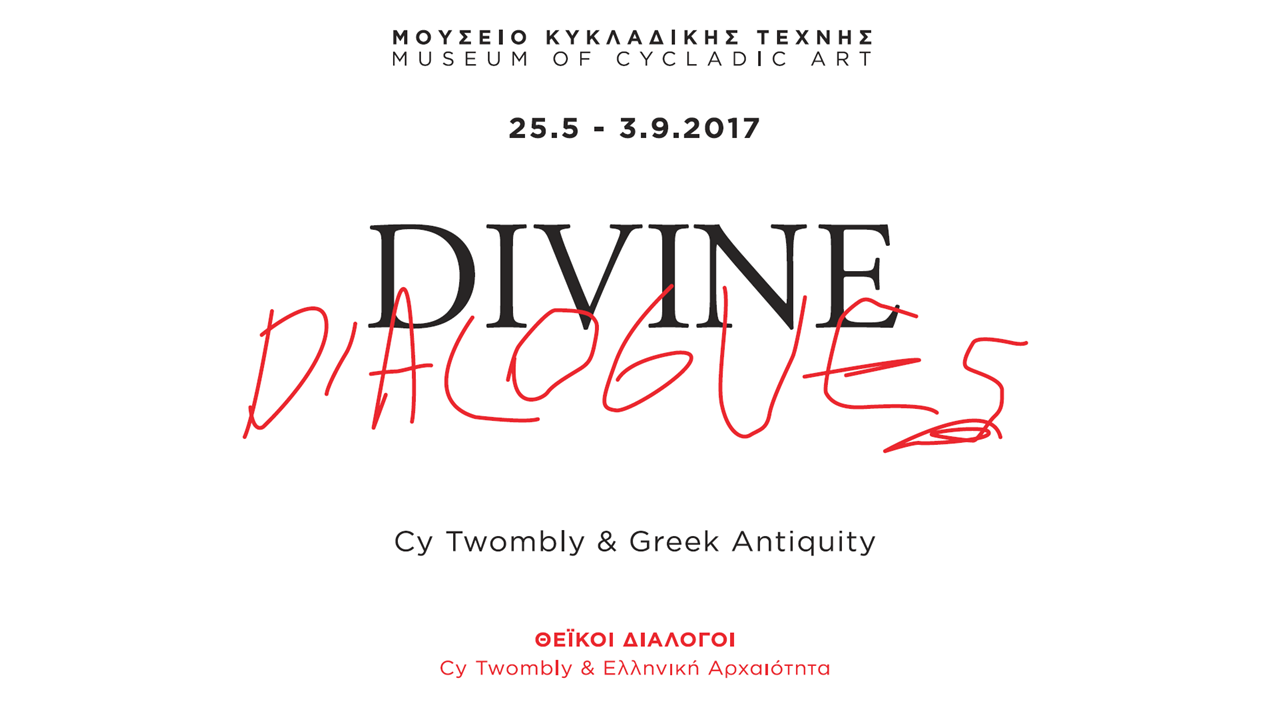 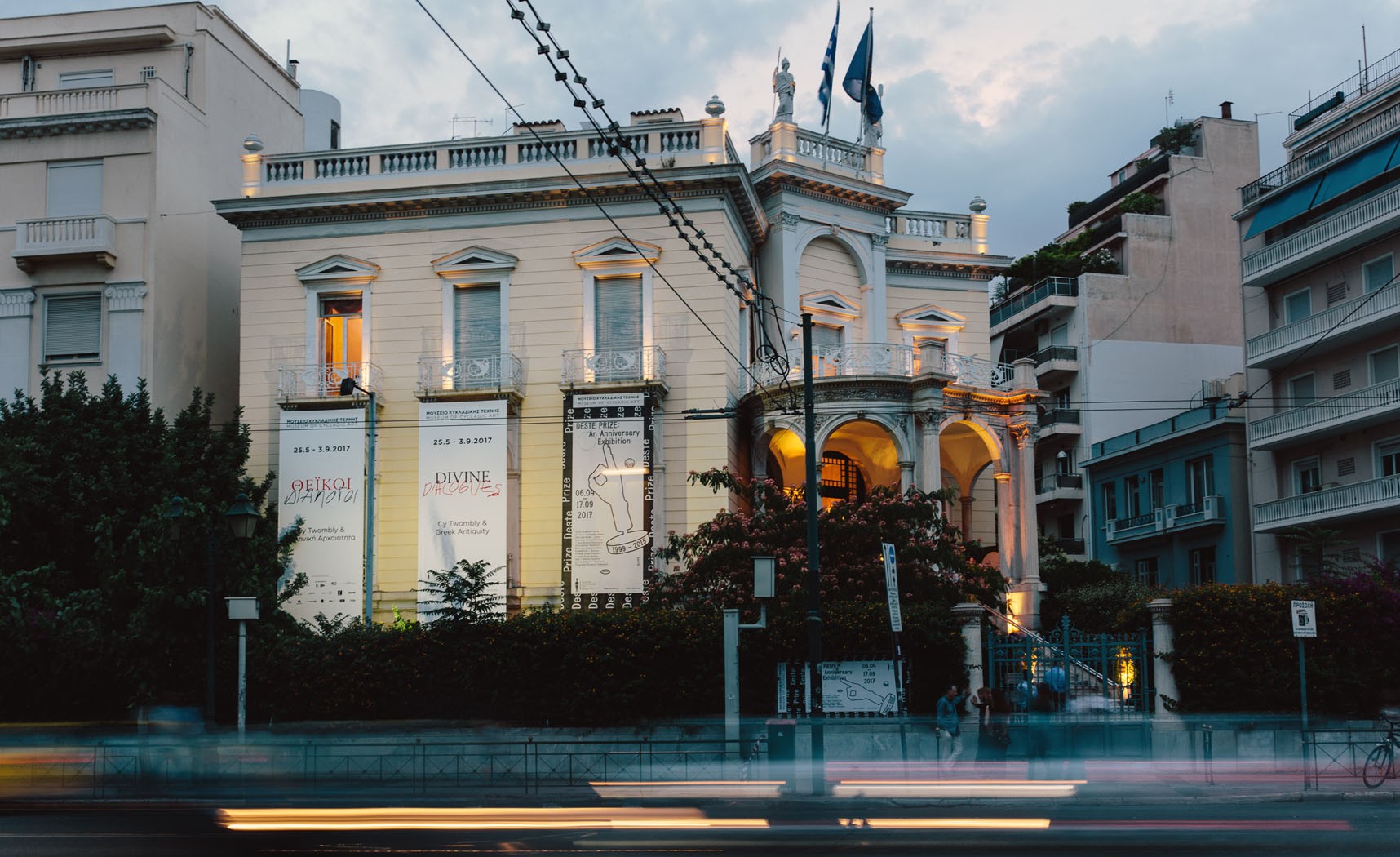 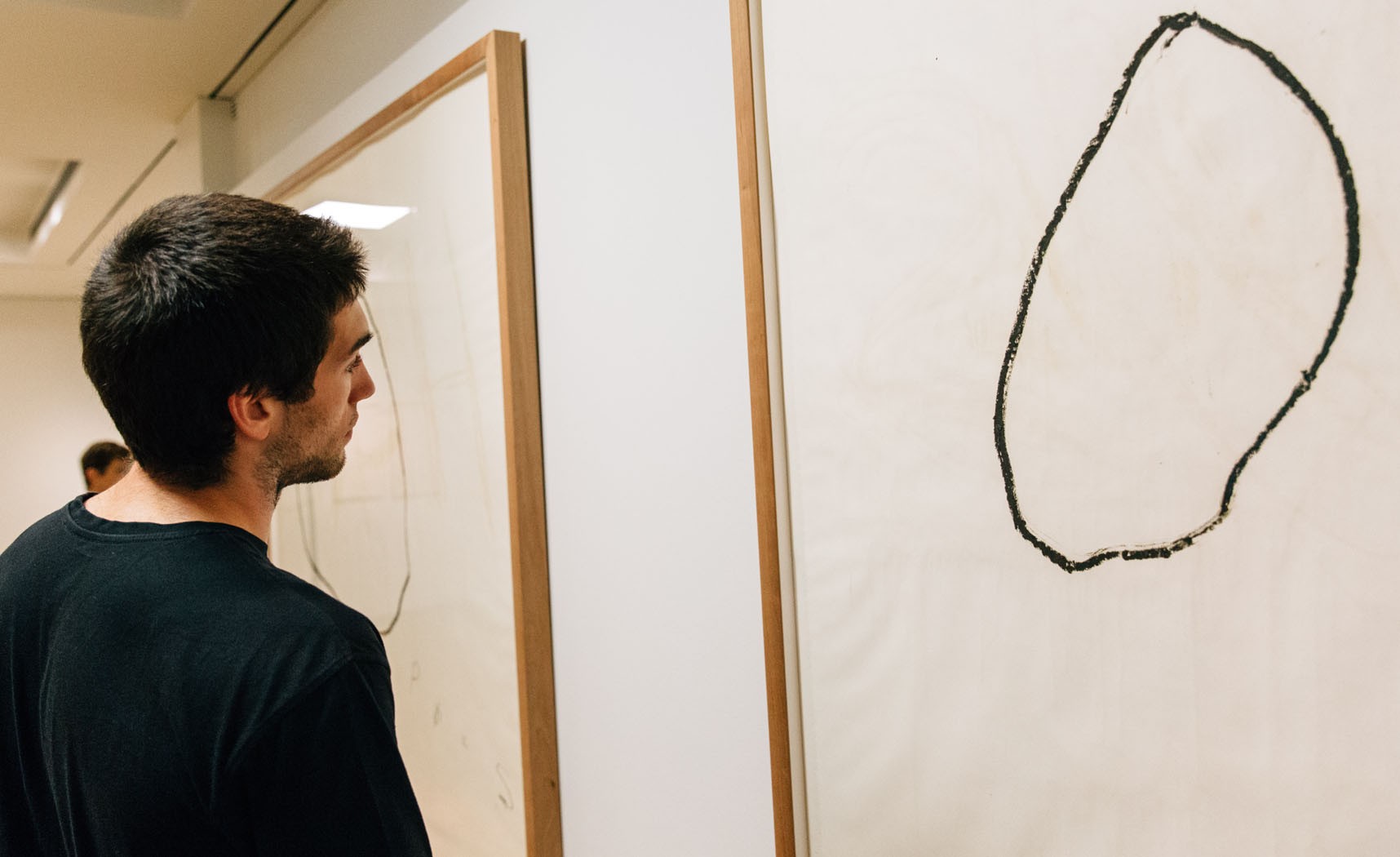 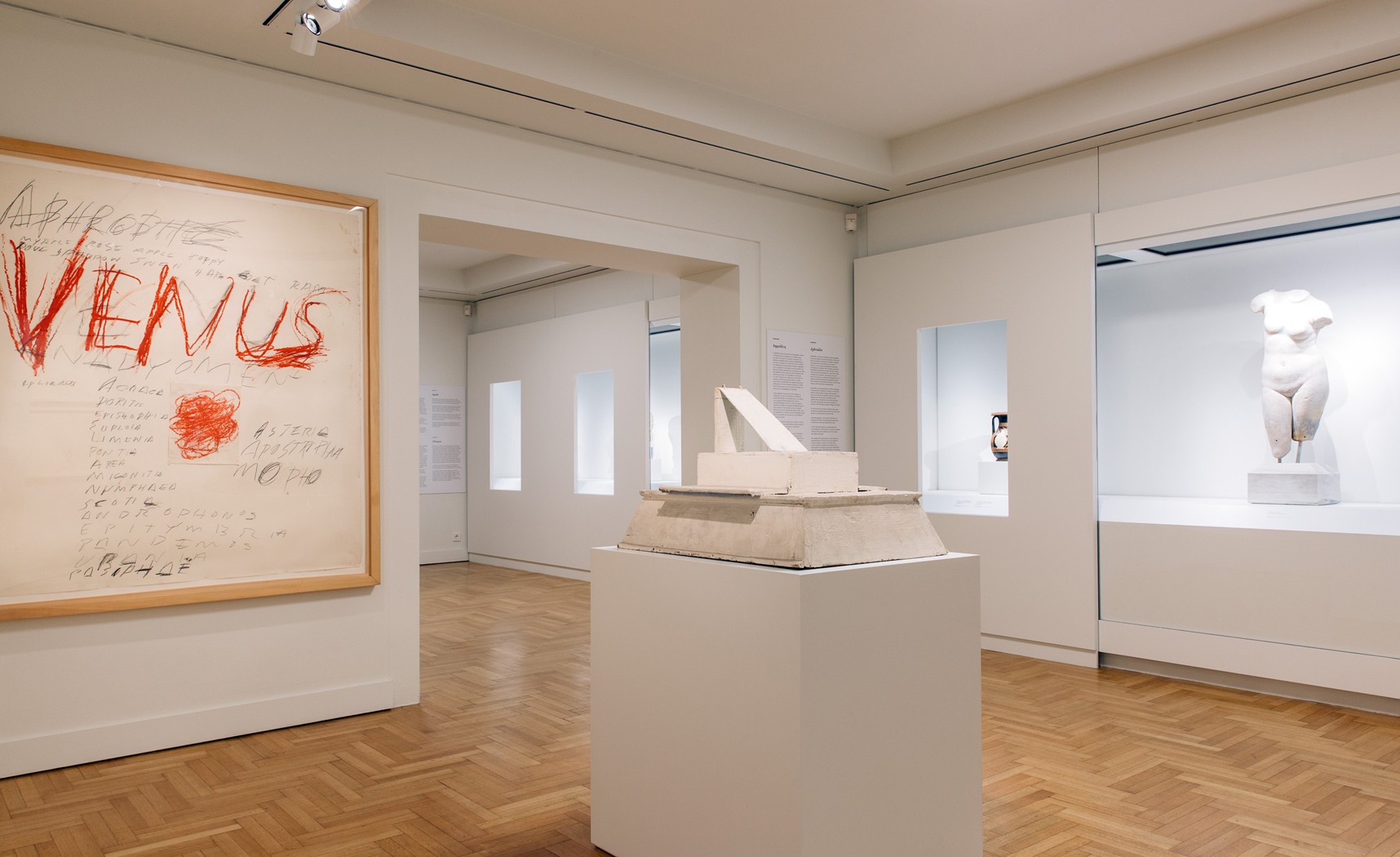 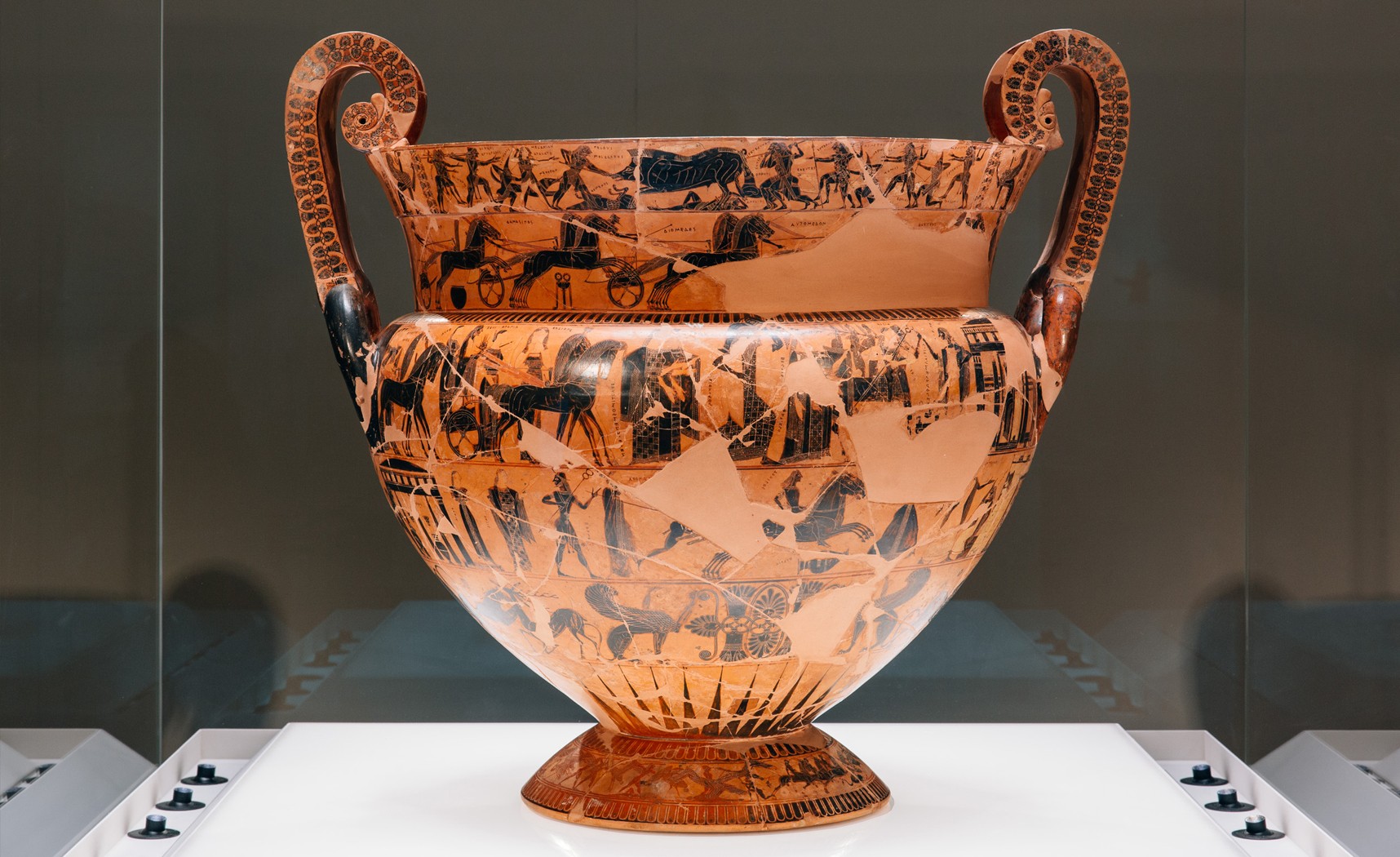 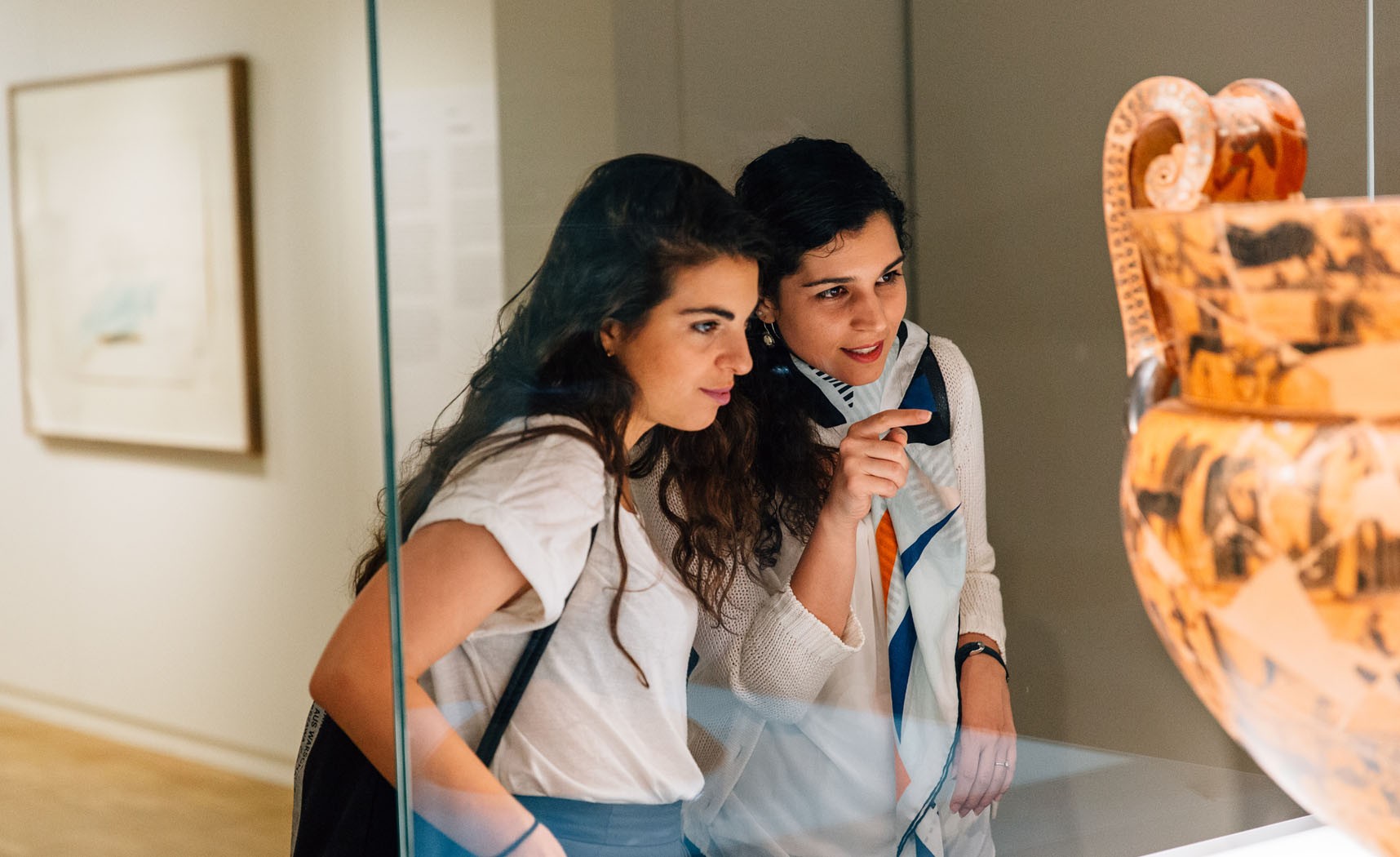 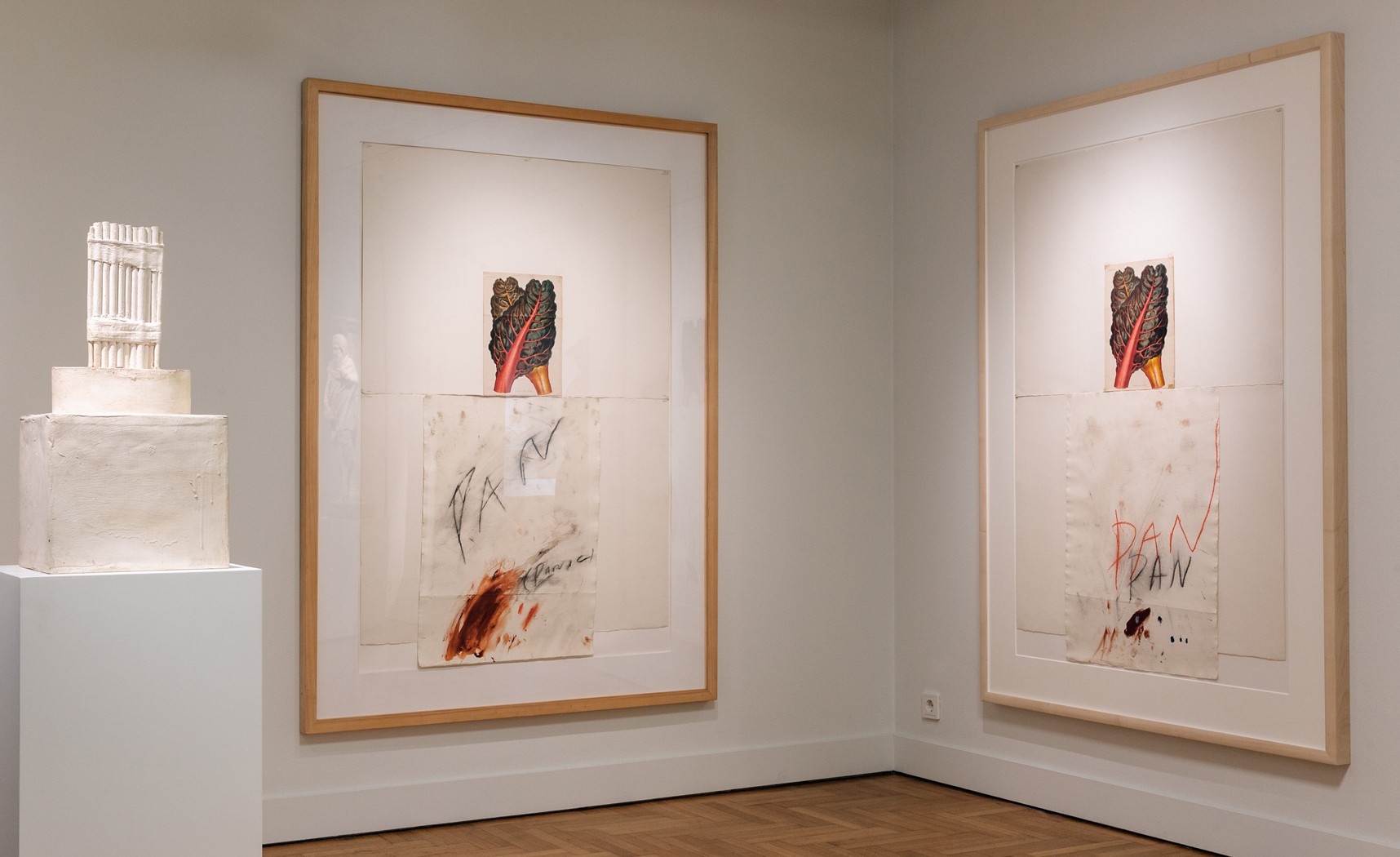 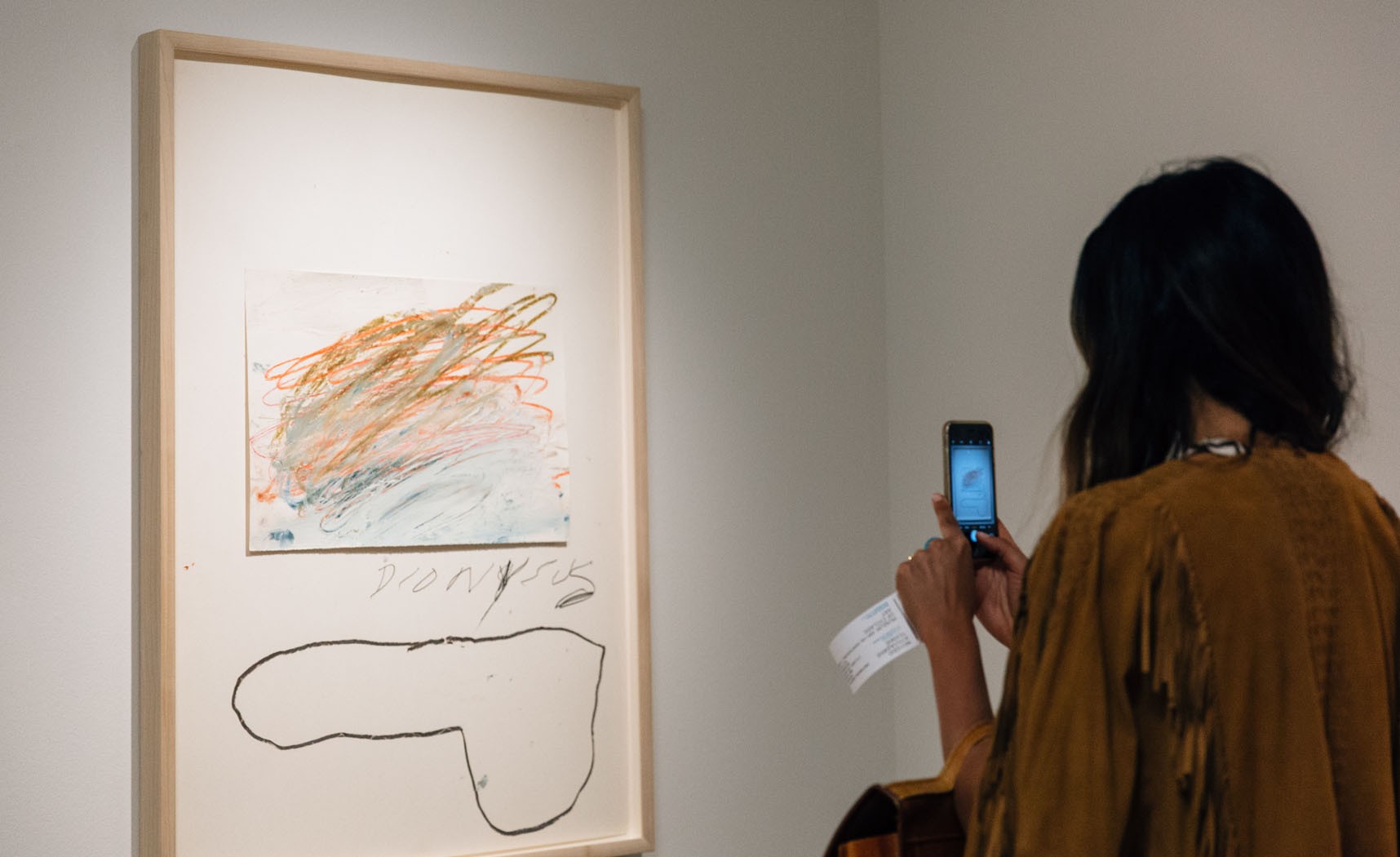 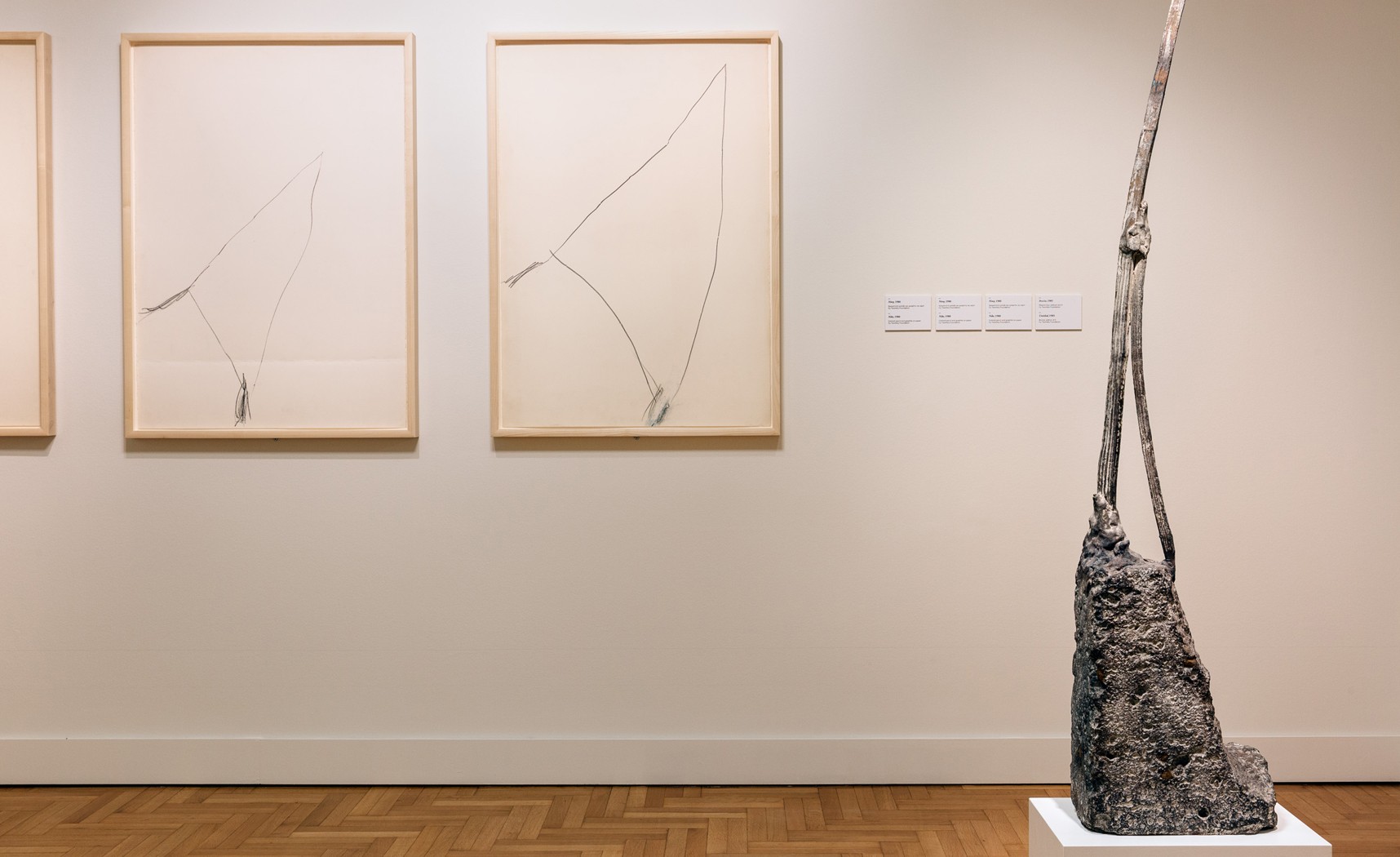 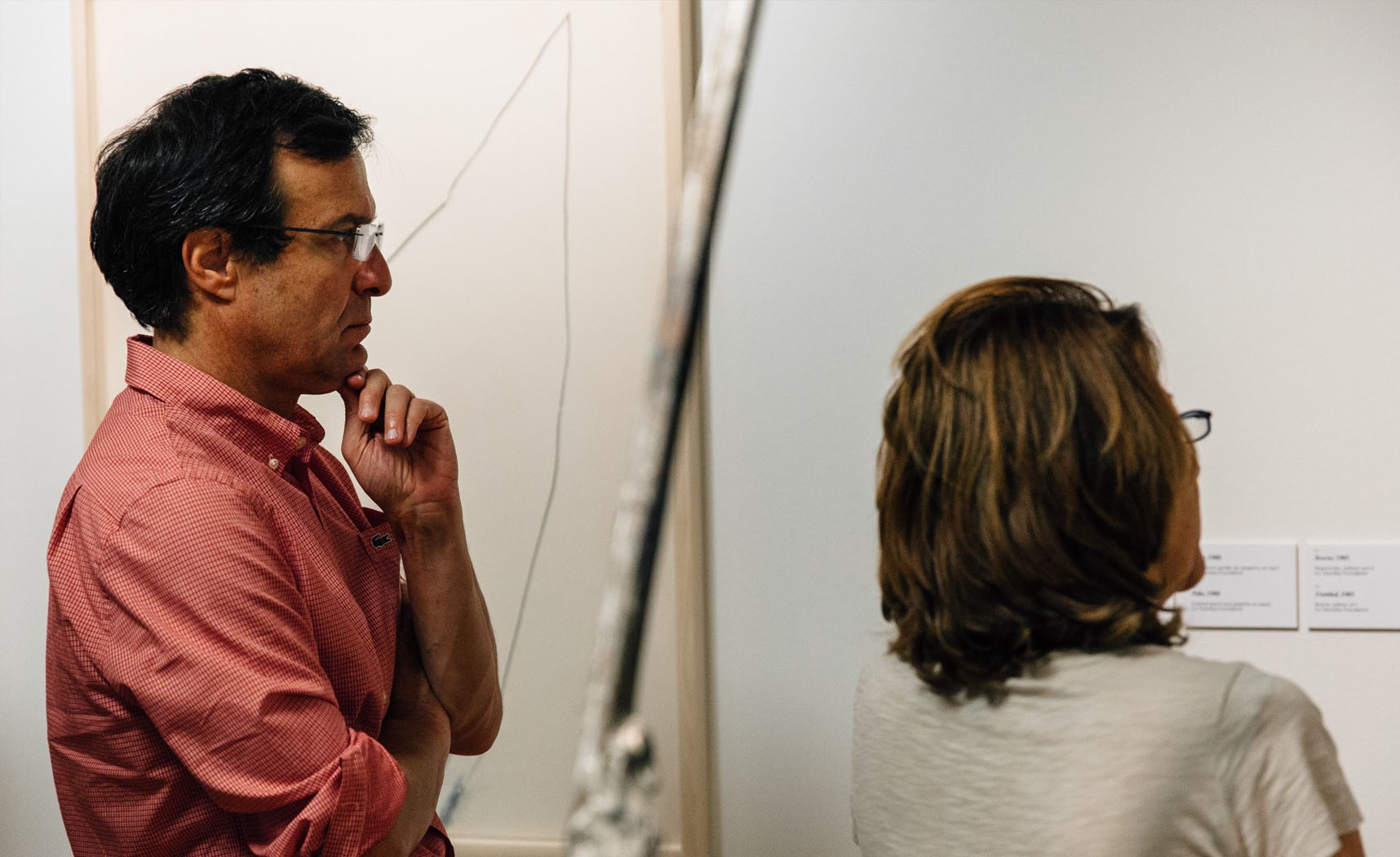 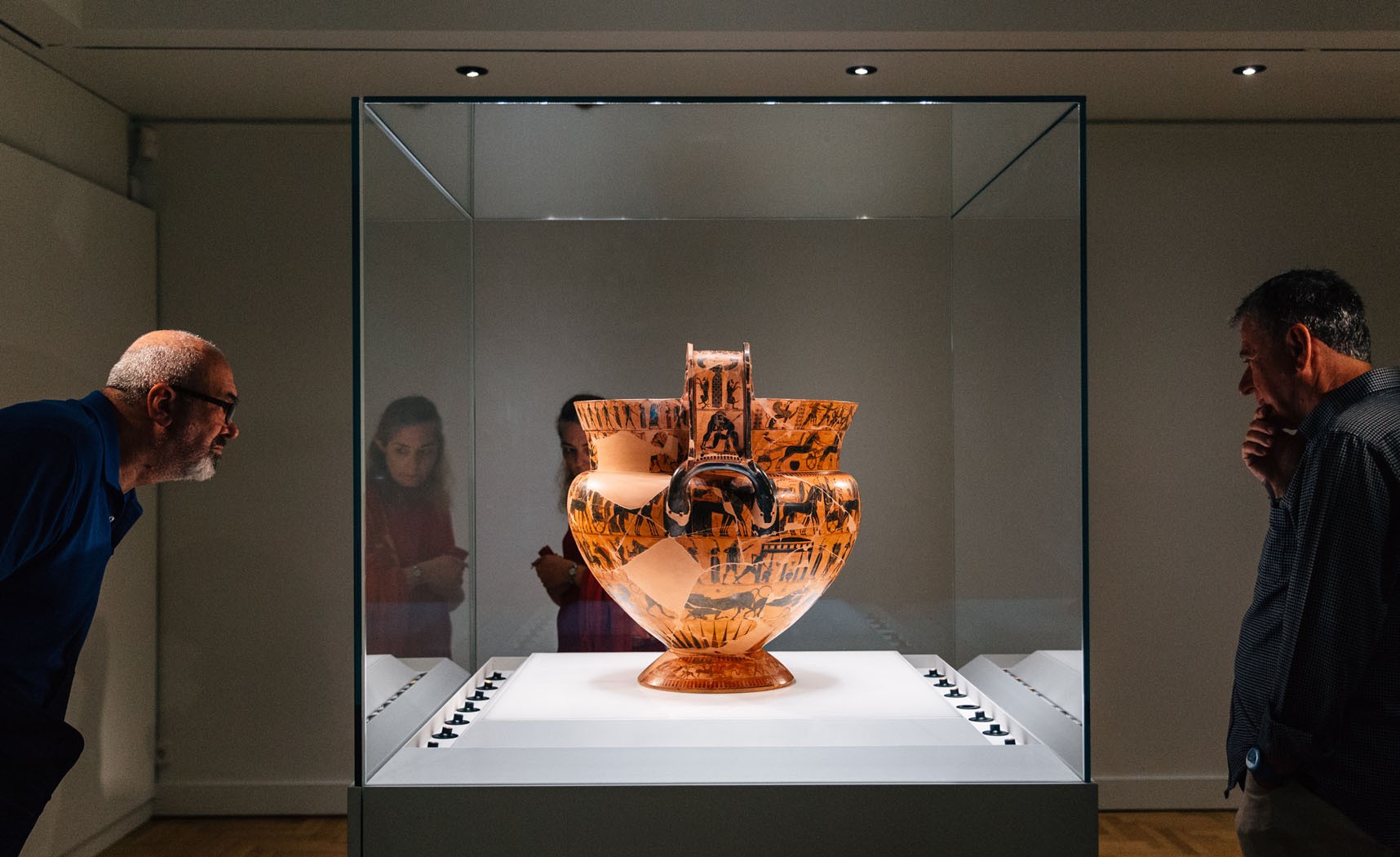 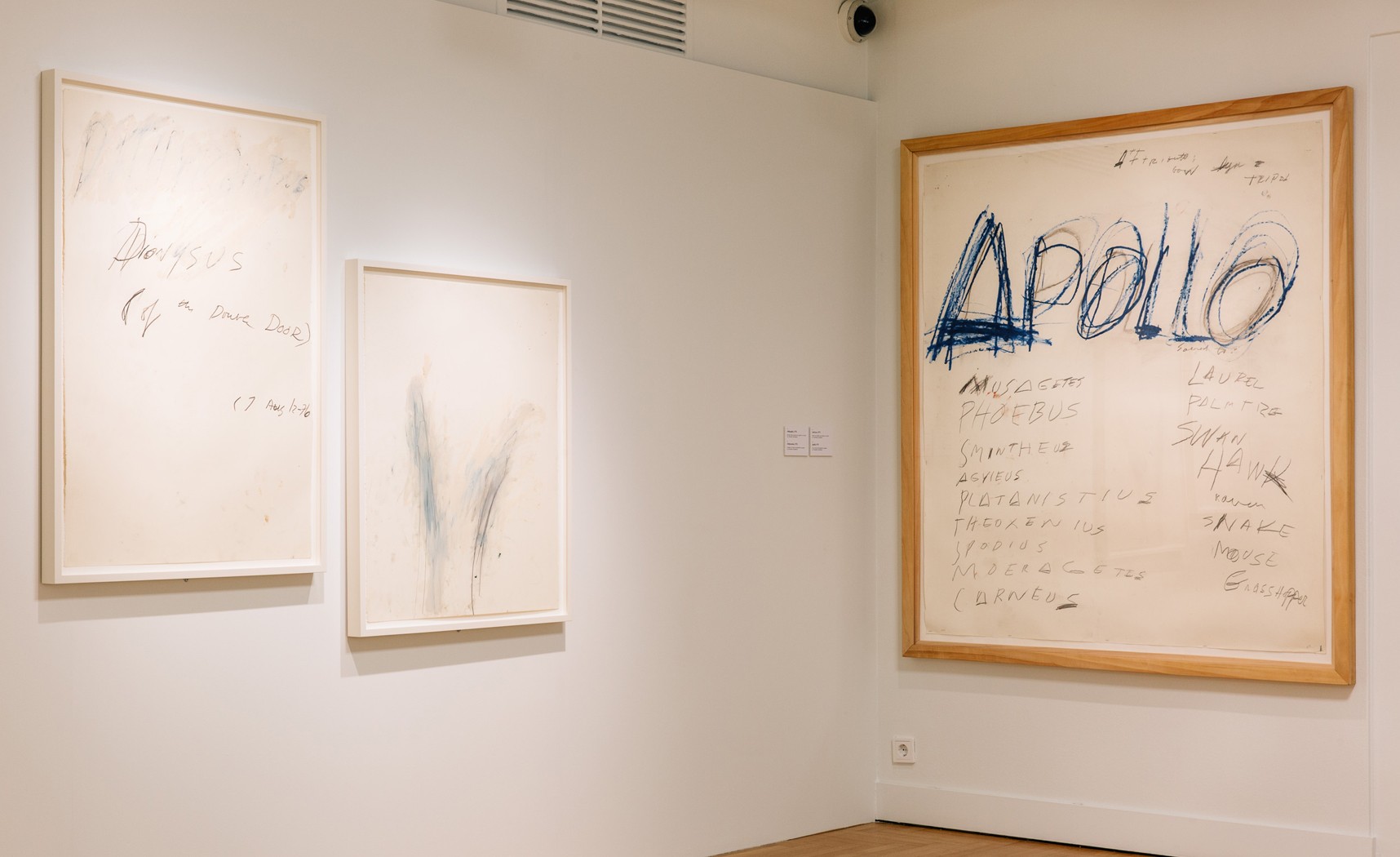 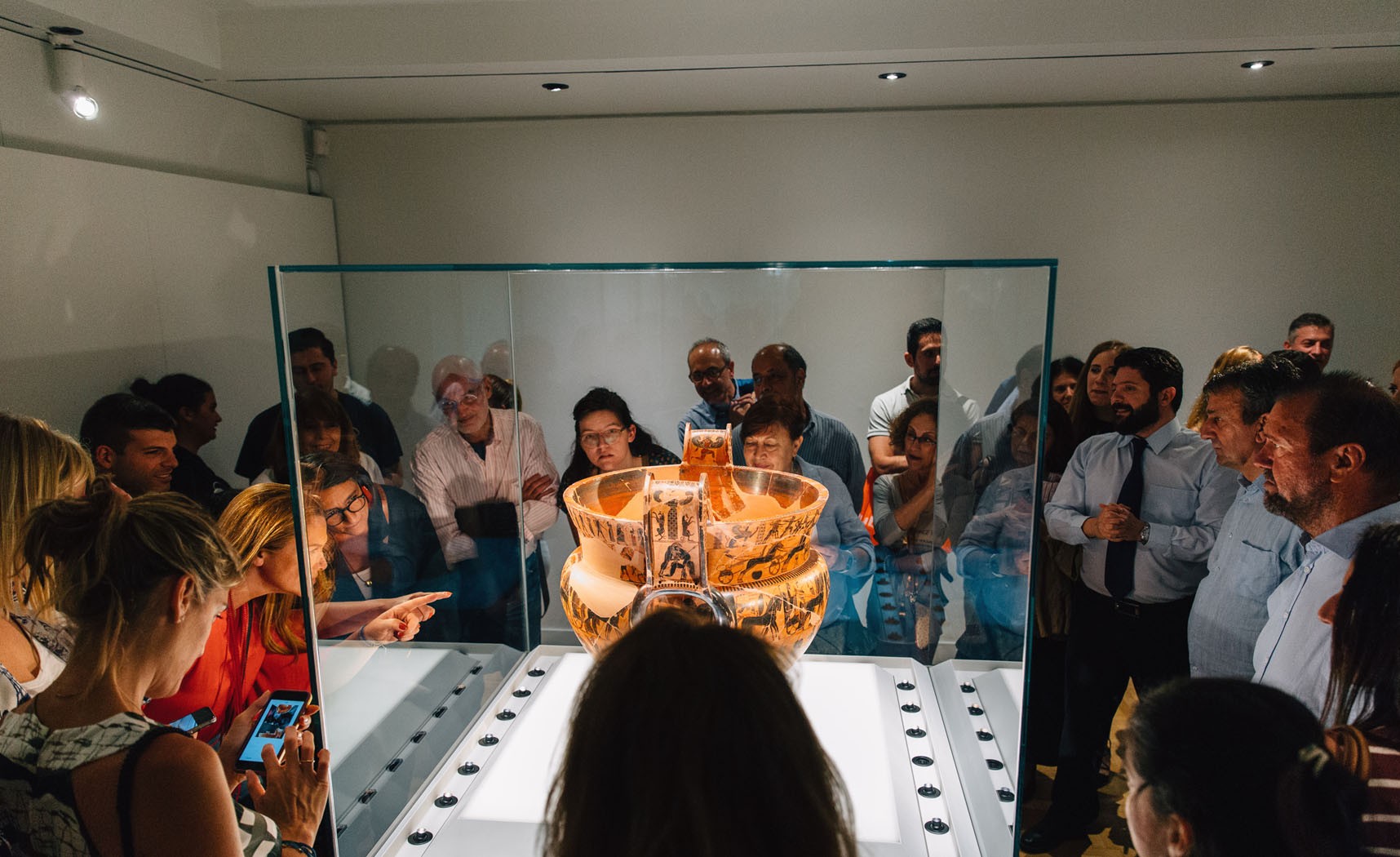 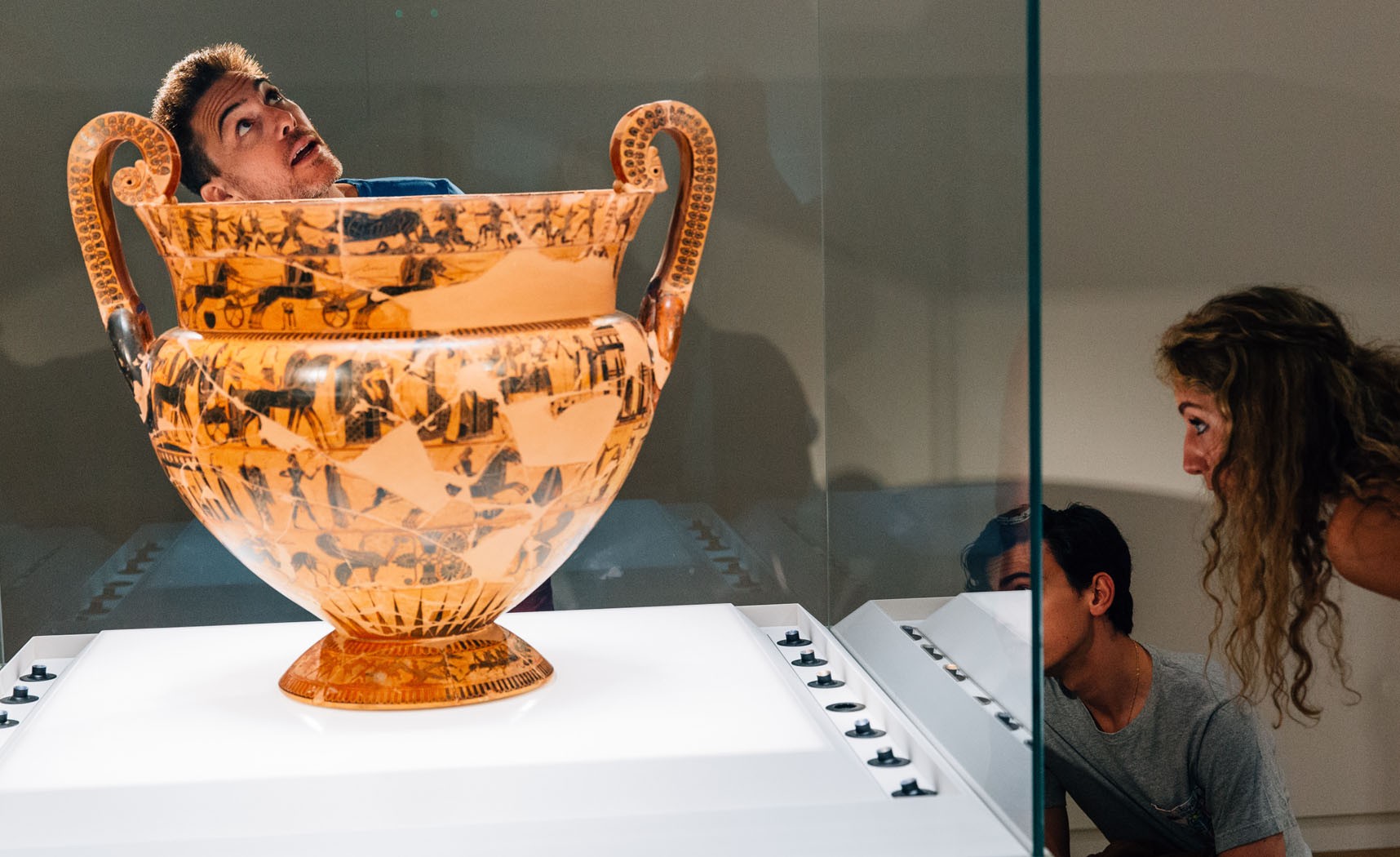 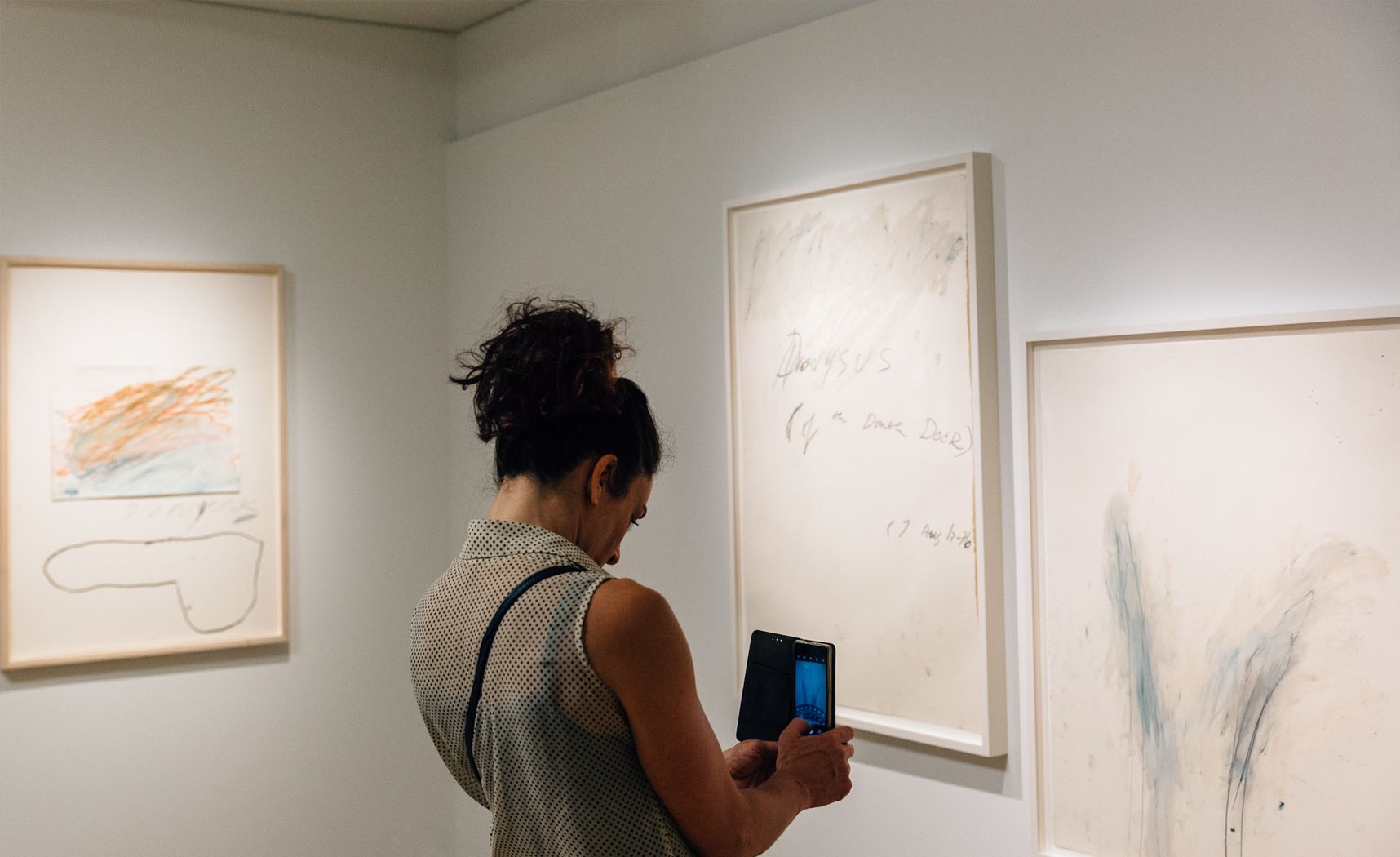 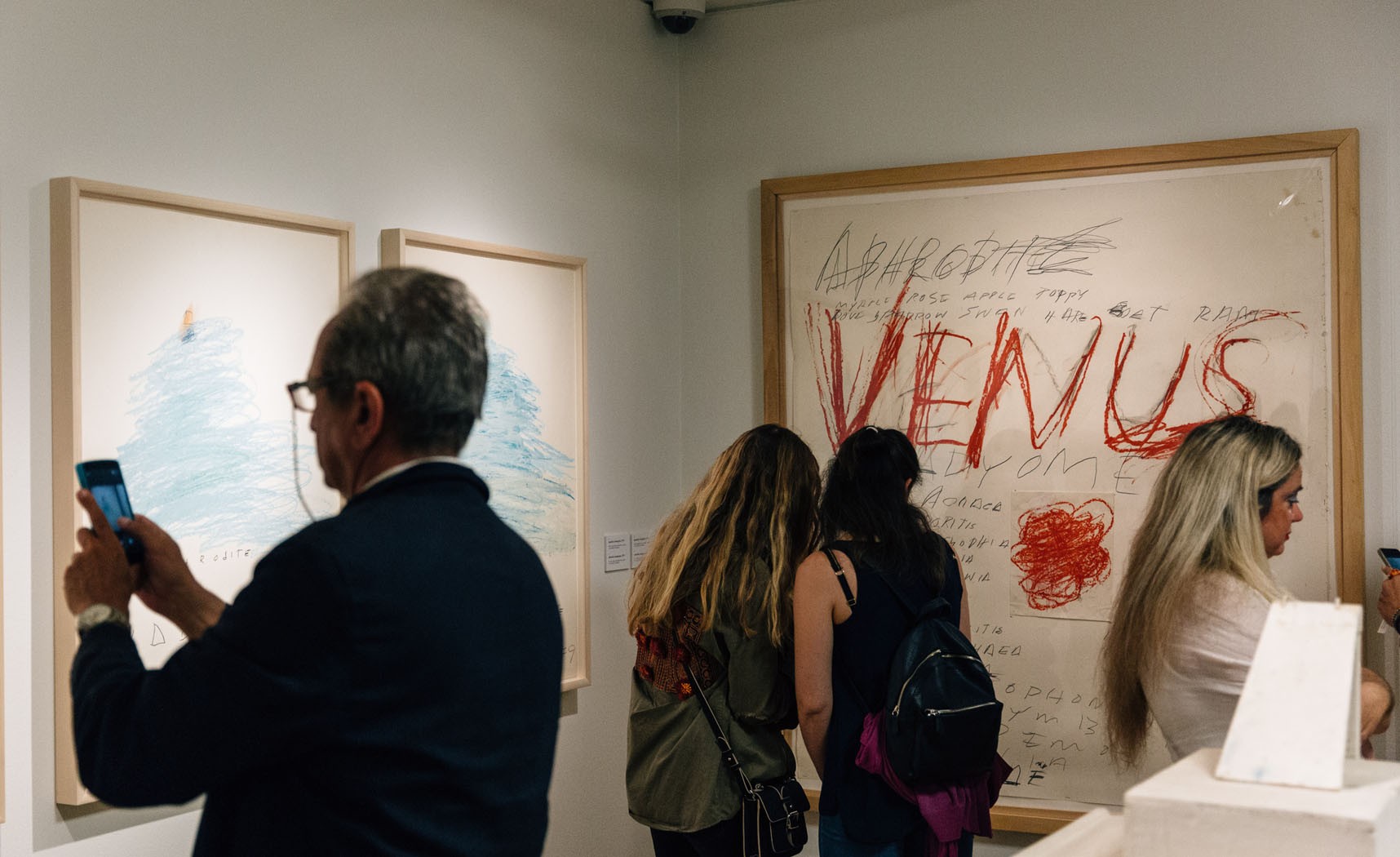 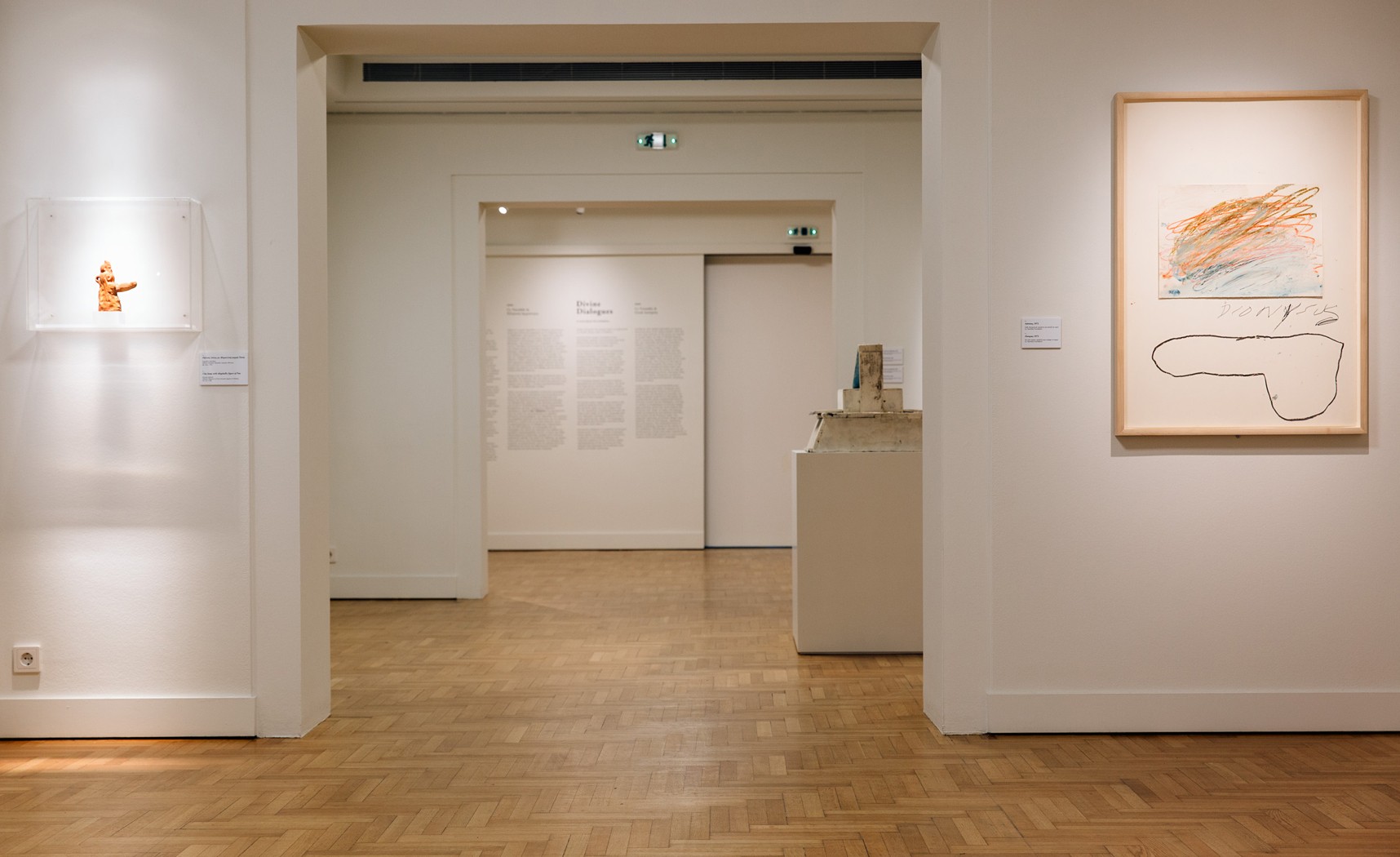 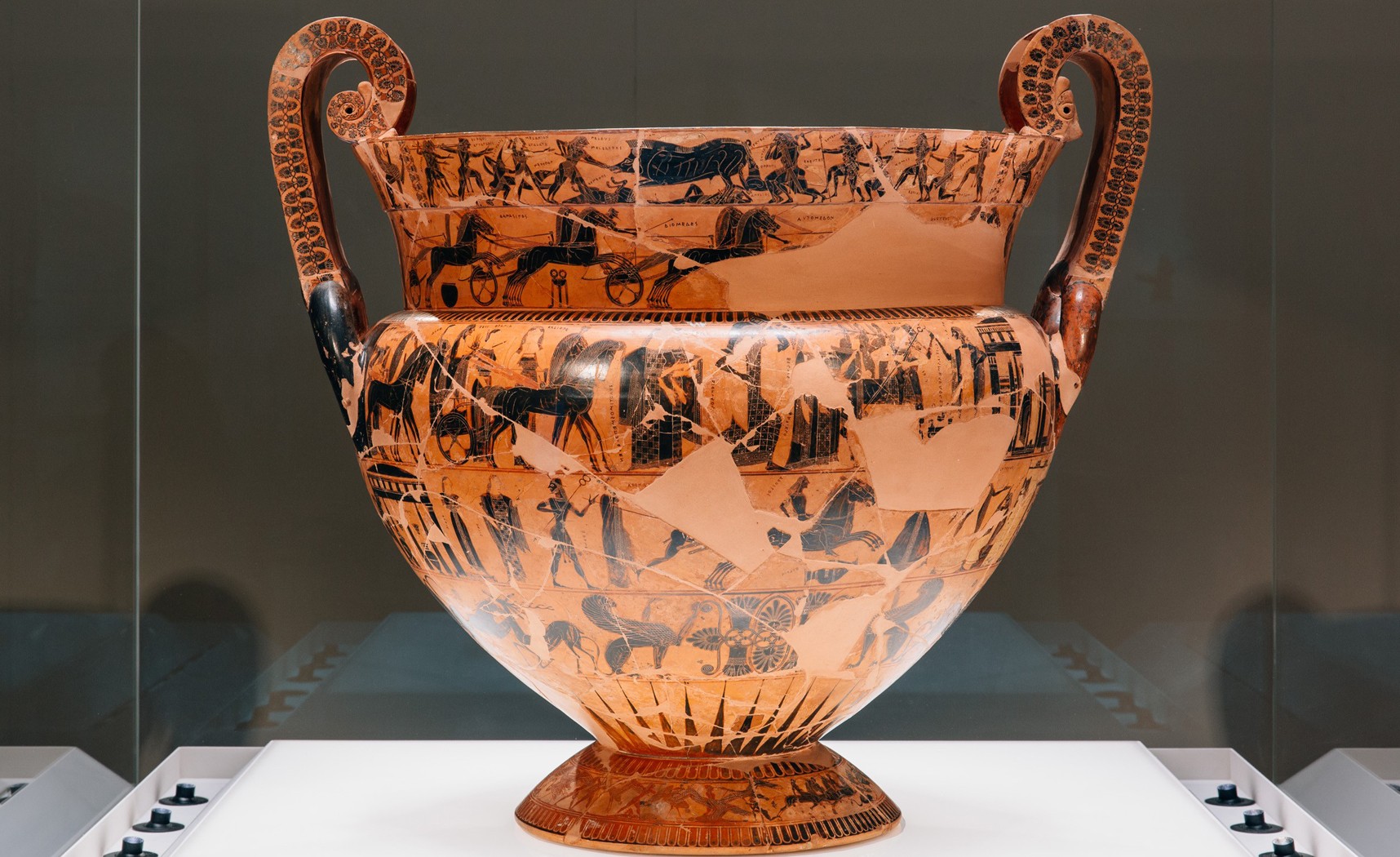 A special place at the very core of the exhibition holds an unexpected visitor: the famous François Vase, also known as the Kleitias and Ergotimos Krater, a milestone in the development of ancient Greek pottery and vase painting, which travels for the first time outside Italy, from the Archaeological Museum of Florence. It has been said that the François Vase is so unique that, even if all other ancient Greek vases were lost, it alone could illustrate Greek mythology and the code of Archaic Greek art.

The François Vase, also known as the Kleitias Krater, is a large Attic volute krater decorated in the black-figure style, which stands at 66 cm in height and is dated approximately at 570 BC. It was created and painted in Attica by the vase maker Ergotimos and the vase painter Kleitias, as the artists’ signatures indicate (from right to left): "Ergotimos mepoiesen" and "Kleitias megraphsen", meaning “Ergotimos made me" and "Kleitias painted me".

It was found in 1844/1845 in an Etruscan tomb near Chiusi, Italy, and was named after its discoverer Alessandro Francois. It depicts over 270 figures, many with identifying inscriptions, representing a number of mythological themes, some of which portrayed here for the first time in ancient Greek art. In 1900 a museum guard threw a stool at the case that contained the vase and smashed it into 638 pieces. It was restored in 1902 by Pietro Zei, while a second reconstruction, in 1973, incorporated a previously missing piece. It is now guarded at the Archaeological Museum of Florence. 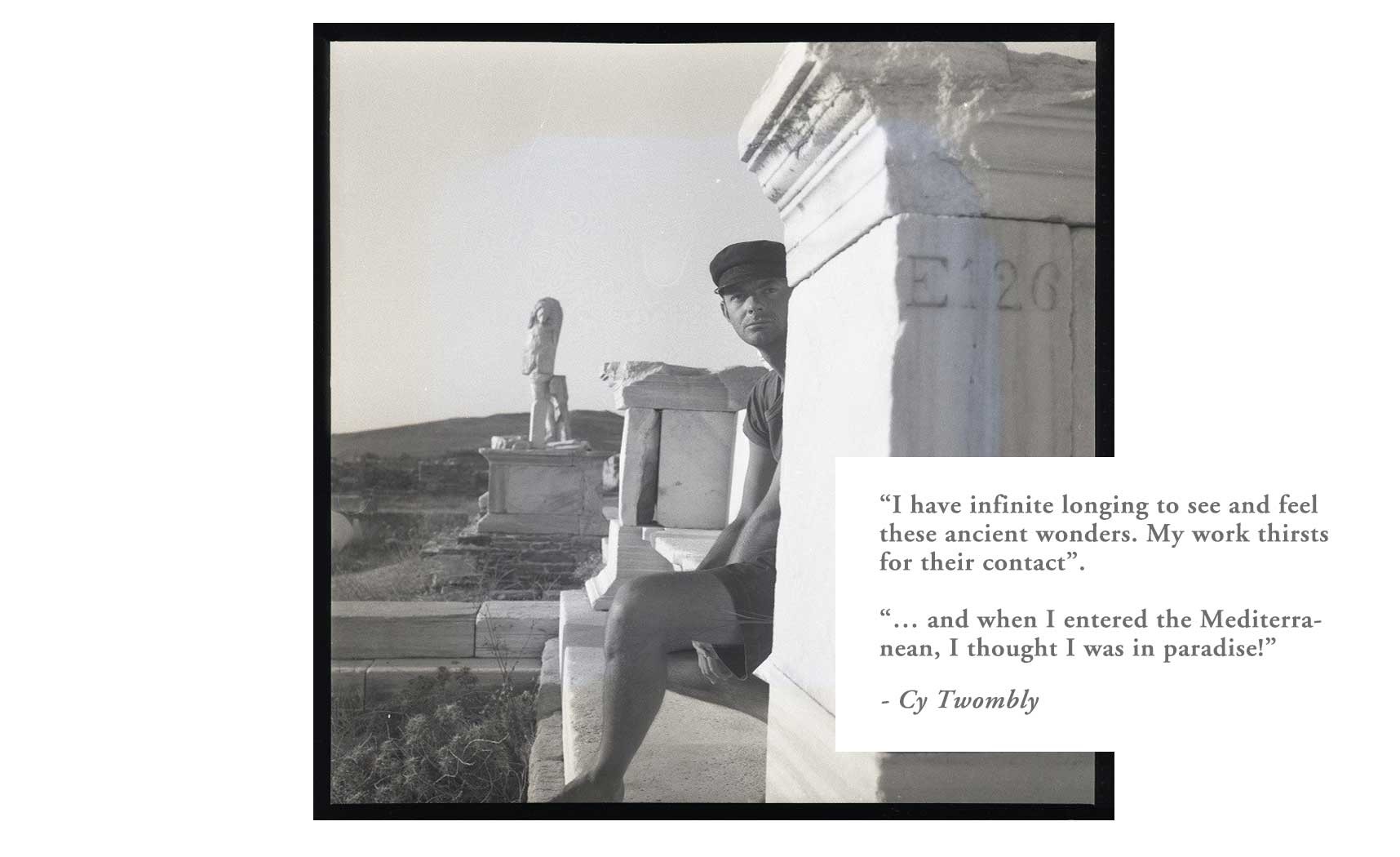 Cy Twombly (1928-2011) was born in Lexington, Virginia. He began studying painting at the Boston Museum School and at Washington and Lee University in Lexington. In 1950 he studied at the Art Students League of New York, where he became friends with Robert Rauschenberg. In 1951-52, he spent several semesters at Black Mountain College in North Carolina, where he attended courses taught by Robert Motherwell and Ben Shahn, among others, and made the acquaintance of John Cage.

Thanks to a travelling scholarship from the Virginia Museum of Fine Arts in Richmond, he traveled to Europe and North Africa in 1952-53, journeying through France, Spain, Italy, and Morocco, being joined at the latter by Rauschenberg. Back in the US, they shared a studio on Fulton Street in New York and participated in an exhibition at the Stable Gallery in the fall of 1953.
Following his military service, a one-year teaching assignment in Virginia, and further exhibitions at the Stable Gallery in New York, he began spending more and more time in Italy from the spring of 1957 on. He had his first solo exhibition in Rome at Galleria La Tartaruga in 1958. In 1959 he married Baroness Tatiana Franchetti, who came from an old Roman family of art patrons; their son Cyrus Alessandro was born that same year.

During the following years he spent the summer months traveling the Mediterranean countries -Greece, Turkey, Egypt, Tunisia- and often spent the winter in New York, or in Lexington where he had rented a studio, or with Rauschenberg on Captiva Island in Florida. In addition to his various studios in Rome, he also used a house in Bassano in Teverina for larger works and bought and renovated the house in 1975. From 1983 until his death, he lived and worked in Gaeta, a seaport situated between Rome and Naples.

For many years Twombly’s work was better known in Europe than in US. Initially exhibitions were held in private galleries in, among other places, New York (at Leo Castelli from 1960 on), but more frequently in Rome and other European cities. The first museum exhibition in the US was held at the Milwaukee Art Center in 1968. A second followed seven years later, in 1975, at the Institute of Contemporary Art in Philadelphia and moved from there to San Francisco.
Cy Twombly was finally discovered and recognized in his native country in the wake of a large-scale retrospective curated by Kirk Varnedoe in 1944-95 at the Museum of Modern Art in New York, which then moved on to Houston and Los Angeles. Twombly was subsequently showered with prizes and international awards -including the Praemium Imperiale in 1996- and honored in exhibitions and retrospectives in the great museums of the world. His works were exhibited numerous times at the Venice Biennale: his drawings in 1980; his nine-piece cycle of “green paintings” in 1989; and his twelve-part Lepanto cycle in 2001 (now in the holdings of the Museum Brandhorst in Munich).

The Cy Twombly Gallery, a museum dedicated solely to his work, was designed by Renzo Piano in close cooperation with Twombly and opened its doors in 1995 on the campus of the Menil Collection in Houston, Texas.

Professor Nikolaos Stampolidis
Director of the Museum of Cycladic Art

WITH THE GENEROUS SUPPORT OF 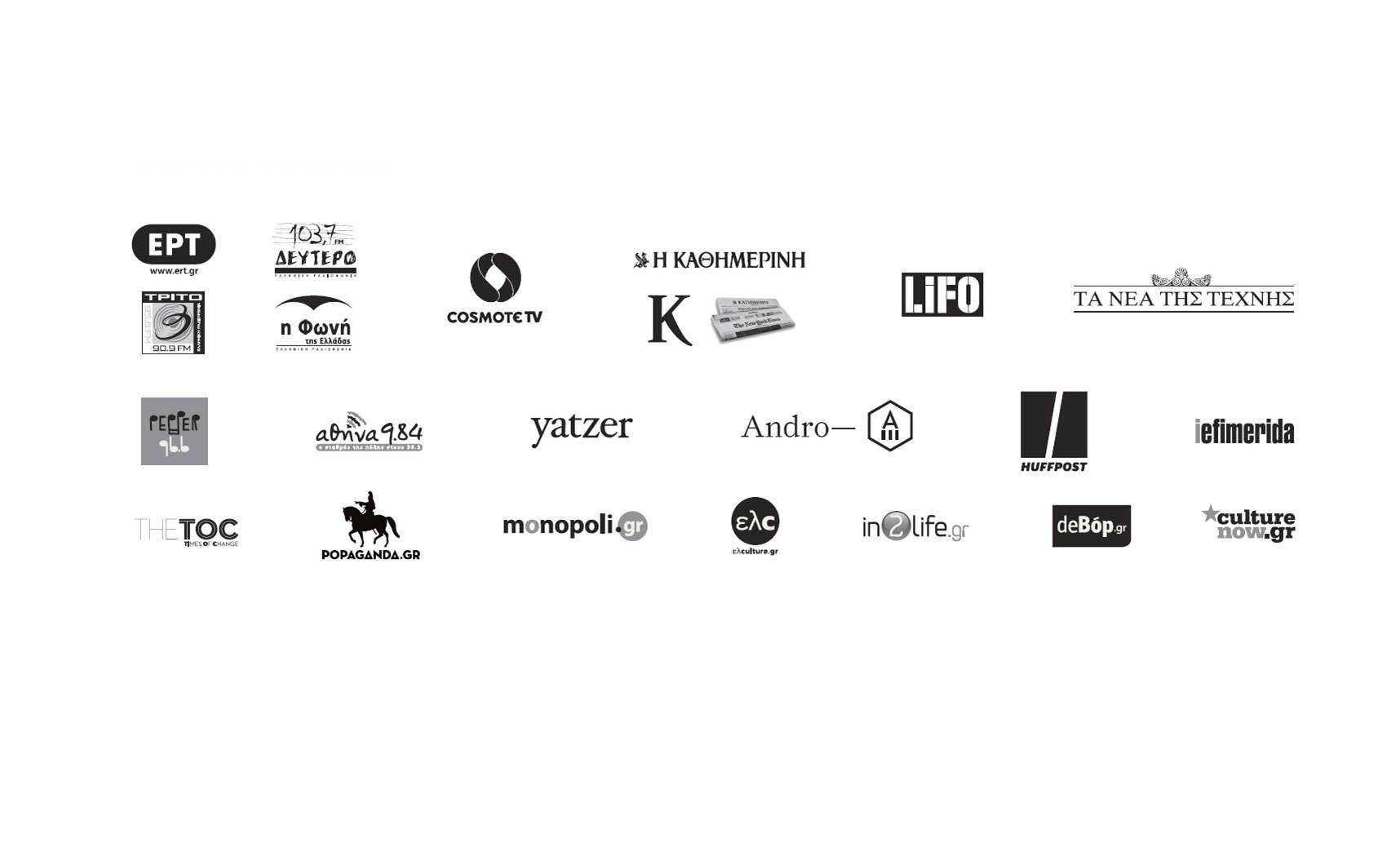