The earliest written testimony available to us regarding the healing practices prevalent in Greek antiquity comes from the Homeric epics, the Iliad and the Odyssey.

The earliest written testimony available to us regarding the healing practices prevalent in Greek antiquity comes from the Homeric epics, the Iliad and the Odyssey. Although their composition dates to the first half of the 7th c. BC, they primarily describe the Mycenaean civilization of the Late Bronze Age – specifically, the period of the Mycenaean King Agamemnon and of the Trojan War, around 1200 BC – as well as the civilization of the Geometric period (11th – 8th c. BC).

There is no pictorial evidence of prehistoric Aegean medical practices, yet finds from the palace archives of the 13th / 12th c. BC permit us to conclude that an established class of people specializing in the healing art existed during that period. Two clay tablets written in Linear B (nos. 1 and 2), which were found in the palace archive of Pylos, contain the words i-ja-te (i.e., ἰητήρ = physician) and pa-ma-ko, (i.e., medicament). This, most likely, is a record of medicaments or medical supplies made for the palace physician.

The study of additional tablets identified various aromatic plants (fennel, cumin, celery, cardamom, coriander, spearmint, iris, and others) that also have therapeutic qualities. It appears the healers of the heroic age turned to the large and rich pharmacy of nature to procure the materials required for preparing their medicines.

The Homeric epics are dominated by the belief that illnesses were godsent punishments for irreverent human actions. The first book of the Iliad actually begins with a deadly epidemic, which struck the Greek military camp when an enraged Apollo unleashed his poisoned arrows against it to punish an impious Agamemnon. According to the advice of the seer Calchas, the epidemic would be cured by appeasing the divine rage through prayers, sacrifices, and purifications. This theocratic perception springs from man’s inability to interpret and deal with the unknown forces of his environment, the elements of nature and the laws that govern it.

In the heroic age Homer describes – in direct contrast to internal diseases – the only disorders that require human intervention and care are battlefield and hunting injuries. The care of wounds is not connected to the gods and requires neither incantations nor expiatory sacrifices. Observation, experience, and skill constitute the foundation for the healing of Homeric heroes.

The Iliad mentions approximately 150 different types of injuries. Most are described with surprising anatomical accuracy – especially if one considers that the first systematic scientific human dissections were carried out in the 3rd c. BC in the medical school of Alexandria by Herophilos and Erasistratos. Consequently, the anatomical knowledge of the Homeric period must have been acquired by studying the carcasses of sacrificial animals and battle wounds.

Homer also describes how wounds were treated; this involved removing foreign objects from the wound, cleaning the wound with tepid water and/or wine, stopping the haemorrhaging with astringent preparations, applying local painkillers – usually in powder form – and, finally, binding the wound with woollen strips.

The “medicines” are not precisely named nor are their components indicated; they are, however, always accompanied by epithets ranging from emollient and painkilling to antidepressant or even deadly. The Greek word pharmakon – from which pharmacy and pharmaceutical are derived – is ambiguous; it can be interpreted as either remedy or poison. The therapeutic or poisonous effect depends solely on the dosage.

Minor wounds could be treated either by the injured warrior himself or by a more experience comrade-in-arms. Some mythical heroes – such as Achilles and Jason (no. 6) among others – possessed additional medical knowledge, acquired when they apprenticed as children at the side of the wise centaur Cheiron, who knew the healing properties of plants.

More serious wounds were treated by the specialist physicians Machaon and Podaleirios who had been taught the precious art of healing by Asklepios, their father. Asklepios first appears in Homer as the king of Trikke in Thessaly and the apprentice of the centaur Cheiron, while he is described as a “peerless physician” (“ἀμύμων ἰητήρ”). Nevertheless, there is no mention of his divine origin and substance; this would occur later during the 6th and 5th c. BC.

Machaon’s medical services were invaluable. Therefore, when he himself was wounded (no. 11), his fellow warriors rushed to remove him from the battlefield and carry him to Nestor’s tent because – as Homer reports (Iliad, XI:514-515) – “a physician is worth more than several men put together, for he can cut out arrows and spread soothing herbs.”

The Homeric epics also provide important information on the social status of physicians. Along with seers, carpenters, and bards, the healers of evils were respected by society because of their special skills. For these skills they were considered craftsmen as well as demiourgoi, i.e., workers, who laboured for the deme, for the public good, servants of mankind in general. They travelled from place to place to practice their craft and offer their services to the community. 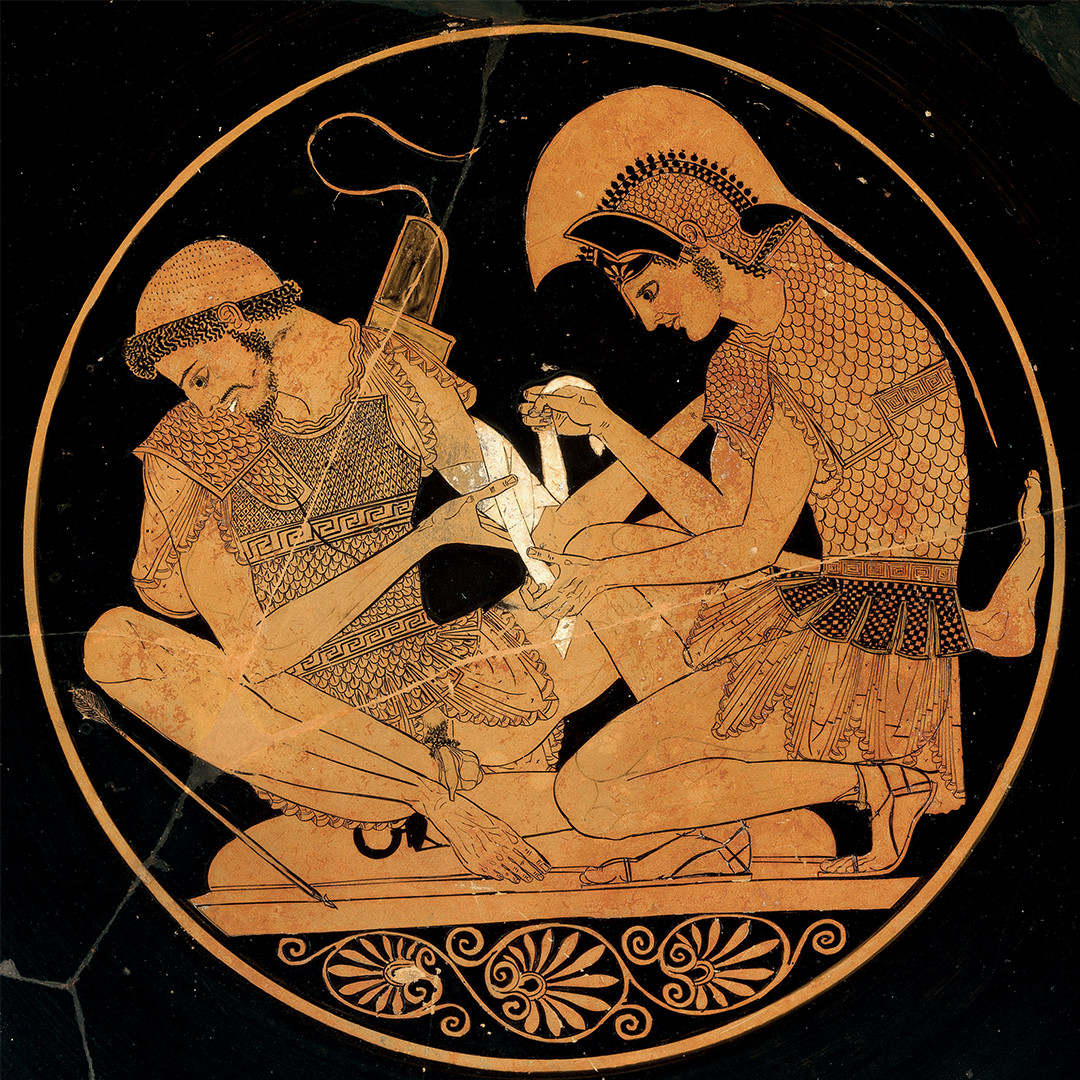 BATTLE WOUNDS AND THEIR TREATMENT IN THE HOMERIC EPICS

The Homeric epics, the Iliad in particular, are the first and most important non medical source of information about battlefield injuries and their treatment in the Greek world.

The realistic descriptions of wounds and death attest to an excellent knowledge of vulnerable points in the human body, and of the anatomical arrangement of principal organs. The amount of medical detail is such that it has even been suggested that Homer was an army surgeon.

BATTLE WOUNDS
The Homeric heroes knew exactly where to strike their opponents to achieve a fatal outcome. It was common empirical knowledge that simple flesh wounds, that were not too deep, were the least dangerous. The most dangerous were chest, abdominal, and, primarily, head wounds:

“Then Idomeneas speared Erymas on the mouth with a thrust of the pitiless bronze; the bronze point of the spear went clean through it beneath the brain, and split asunder the white bones; and his teeth were knocked out, and both his eyes were filled with blood; and up through mouth and nostrils he spurted blood, and a black cloud of death enfolded him.” (Iliad, XVI:345 - 350)

Beyond the description of wounds, to a lesser extent Homer also recorded the care given to an injured warrior. The treatment to be given depended on the type and the gravity of the wound.

The two following excerpts are characteristic: In the first, the physician Machaon rushes to the assistance of Menelaos, who was wounded in the abdominal area by a arrow, while in the second, the injured Eurypylos, asks Patroclos, his comrade-in-arms, to save him and place herbs on his wound, the way he learned from Achilles, who had been taught by the Centaur Cheiron.“And when they came where fair-haired Menelaos was wounded, the hero [Machaon] straightway drew forth the arrow from the clasped belt; and as it was drawn forth the sharp barbs were broken… and when he saw the wound, he sucked out the blood, and with sure knowledge spread thereon soothing simples, which of old, Cheiron had given to his father with kindly thought.” (Iliad, IV:210-219)

“... and led him to the hut, and a squire strewed upon the ground hides of oxen. There Patroclos made him lie at length, and with a knife cut from his thigh the sharp-piercing arrow, and from the wound cleansed the clotted blood with tepid water; and upon it cast a bitter root, pounded in his hands, a root which all his pains allayed; and the wound was dried, and stanched the blood.” (Iliad, XI:828-848)