The Athena of Arezzo in Athens

The Museum of Cycladic Art, in collaboration with the Italian Ministry of Culture and the Superintendence of Antiquities in Tuscany, presented a masterly bronze statue and its bronze replica, as restored inthe late 18th century.

A brief history of Athena from Arezzo

The bronze statue of the goddess Athena (1,90m. high, including its base) was accidentally discovered in 1541 in Arezzo, Italy, by some workmen who found it in pieces while digging a well.

In 1542, the statue was transferred to Florence, after it became part of the collection of Duke Cosimo I de’ Medici.

The statue was missing its right arm as well as a large piece from the lower part of its back side.

Nevertheless, it is not known who affixed its parts upon a wooden core. In 1679, the bronze Athena was transferred to the Uffizi Gallery. In the early 18th century, a conservator created a plaster cast of an arm (bent at the elbow and raised) holding a spear and used it to replace the statue’s missing right.

The plaster arm was, in turn, replaced in 1785 by a bronze one cast by the sculptor Francesco Carradori, who, however, rendered it in a different stance (outstretched, without a spear).

The statue retained this form for over 200 years, namely until 2000, when the Superintendence of Antiquities in Tuscany undertook a new in-depth study of the statue, in order to determine its state of preservation as well as the casting techniques used.

The preservation of the statue and the creation of a modern replica Research indicated that the inner wooden core, on which the individual parts of the statue had been affixed, was worm-eaten and in danger of collapsing.

Thus, it was decided to disassemble the statue and conserve it anew. However, prior to proceeding to the disassembling, a true bronze replica was cast, in order to preserve the particular three-dimensional image of the sculpture in case the conservation process altered its form.

The conservation of the statue was a strenuous and lengthy process, as it lasted 8 years. The inner wooden core, as well as all earlier additions, were removed, while, at the same time, the surface of the metal was cleaned.

Next, the various parts were reassembled on a stainless steel support. This time, however, careful observation and study identified the joints of individual parts. As a result, their reassembling corrected the inclination of the head and straightened the stance of the body, while the bronze right arm, produced in 1785, was not reused, since its outstretched stance no longer fitted the statue’s new appearance.

Nevertheless, the value of the conservation works as well as of the studies that were conducted is not limited to the renewal of Athena’s appearance, but encompasses the revision of its dating as well. Until then it was believed that it was a Roman replica of the 1st century A.D., while now scholars consider it an original bronze creation, cast in a Greek foundry, in the early 3rd century B.C. (circa 300 – 280 B.C.).

At the same time, excavations conducted in the 19th and 20th centuries in the area where the statue was found in 1541 brought to light the remains of a large Roman aristocratic residence of the 1st century A.D., which apparently contained the ancient bronze statue of Athena.

We don’t know how the owner of the house came into its’ possession, but it is certain that he would proudly display it to his visitors and also use it to decorate one of the rooms of his luxurious residence – most probably the library, as Athena is the goddess of wisdom.

This exhibition granted both the general public and expert scholars the opportunity to see the statue and discuss the ‘before’ and ‘after’ of the Arretine Athena, who, as the patron divinity of Athens, visits her own city.

Such an original, masterly work of art of the early Hellenistic period, which, following its conservation, travelled to the Land of the Rising Sun (Japan), was a unique opportunity for the Greek public and foreign visitors of Athens, in an effort of the Museum of Cycladic Art to initiate the presentation of special, individual works of art (from Antiquity, Byzantine times, the Renaissance and Modern Art). 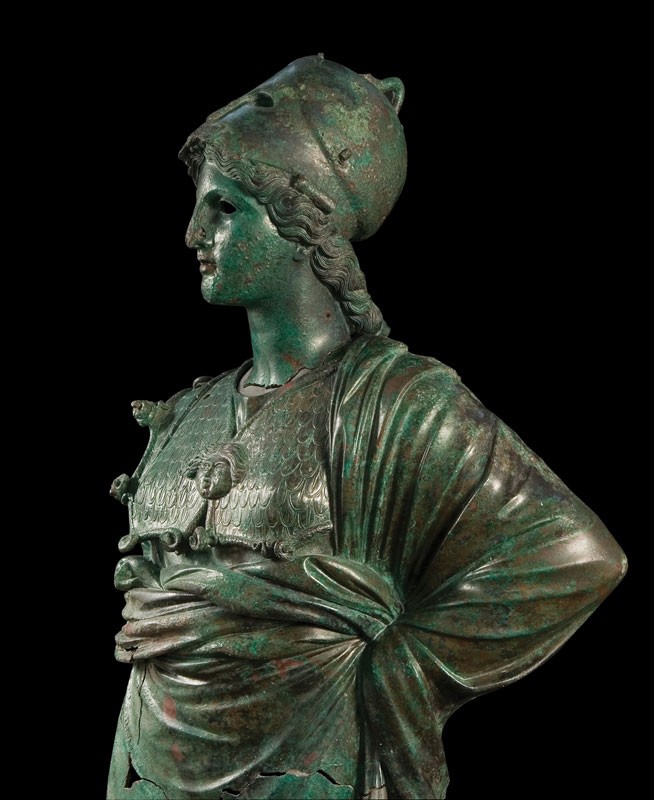 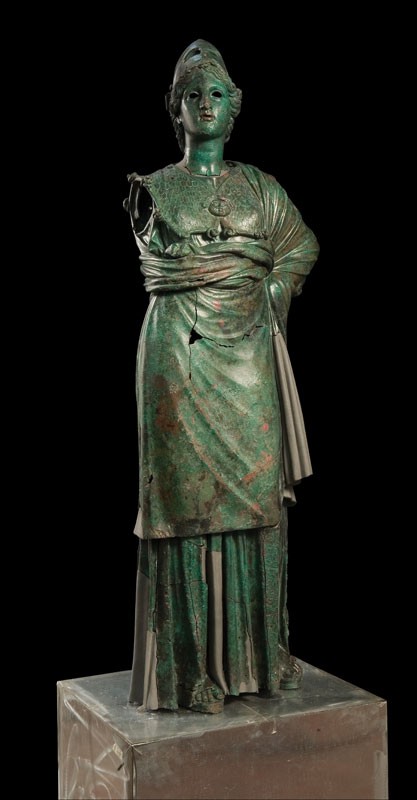 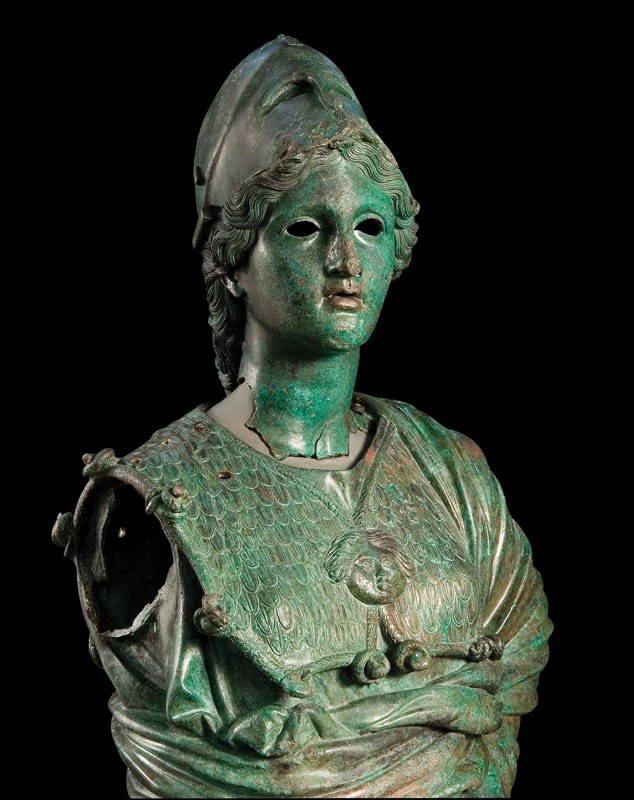 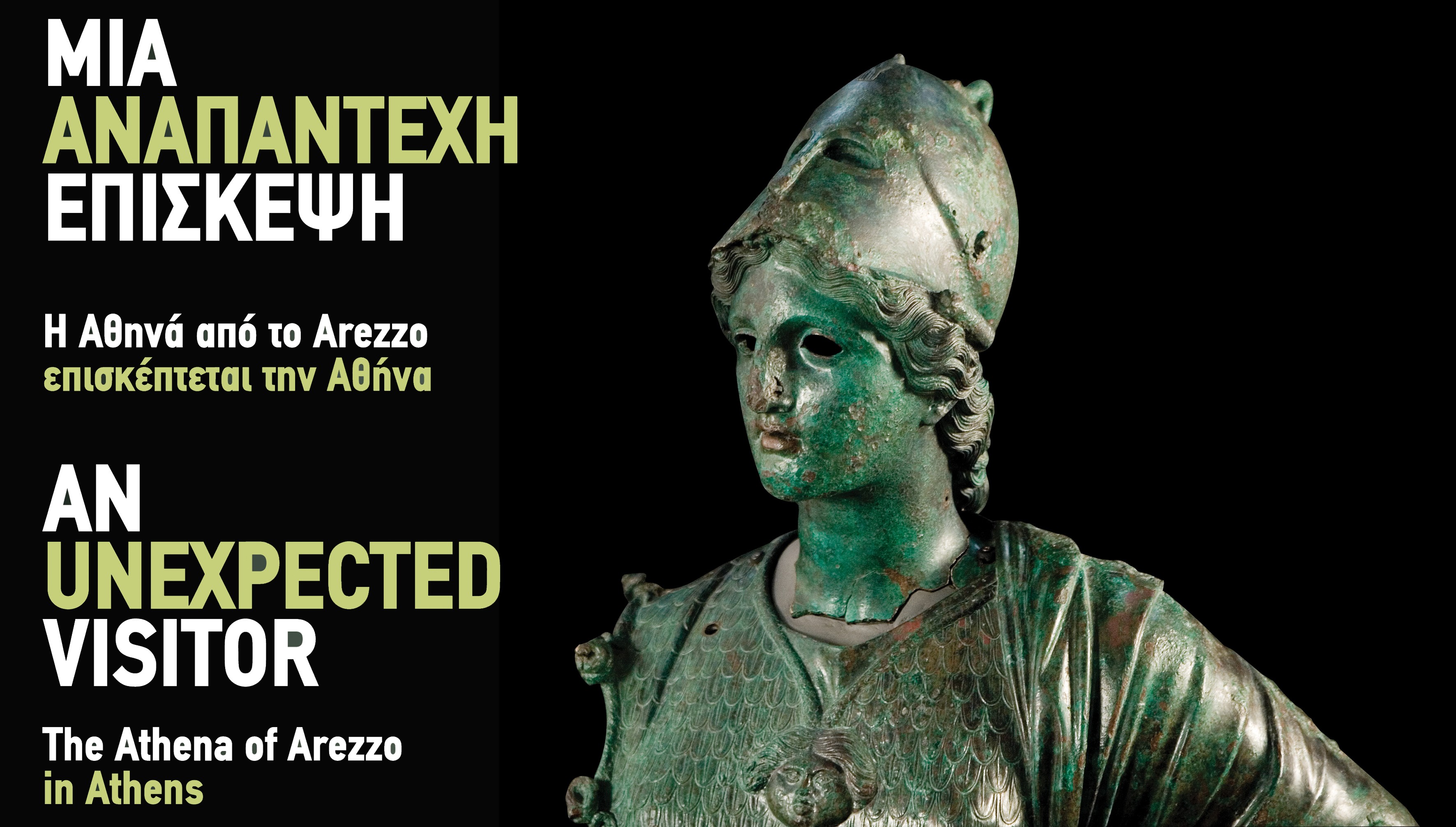 Yorgos Tassoulas
Curator of the Museum of Cycladic Art

UNDER THE AUSPICES OF
Italian Embassy in Athens