The Cyclades are inhabited from 5000 BC until this day almost without interruption.

Human presence in the Cyclades 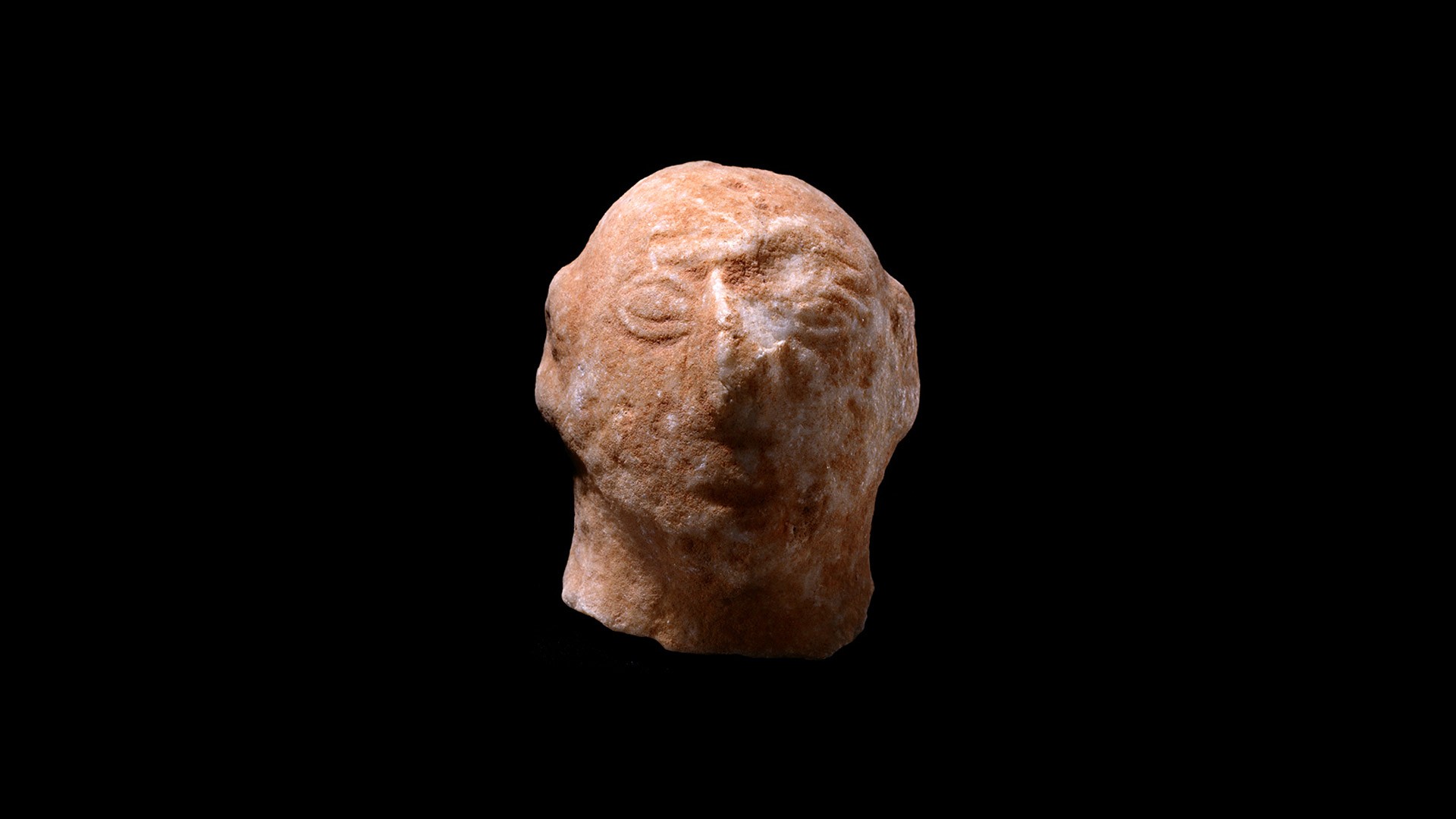 The earliest traces of human activity in the Cyclades date to the 7th millennium BC and come from Melos, which seems to have been visited by people from mainland Greece in search of high-quality obsidian. This hard volcanic rock was extensively used throughout the Aegean in the Neolithic period but also in the Bronze Age for the manufacture of cutting tools and weapons.

Permanent settlements were established in the Late Neolithic period (c. 5000 BC) on Andros, Naxos, Antiparos, Amorgos, Thera and a few more islands. Those early settlements were small in size and their inhabitants depended on agriculture, animal-breeding and fishing for subsistence. In the following Early Cycladic period (3200-2800 BC), all Cycladic islands were inhabited and had started developing relations among themselves and with the surrounding Aegean coasts. Since that time, occupation has continued almost without interruption. 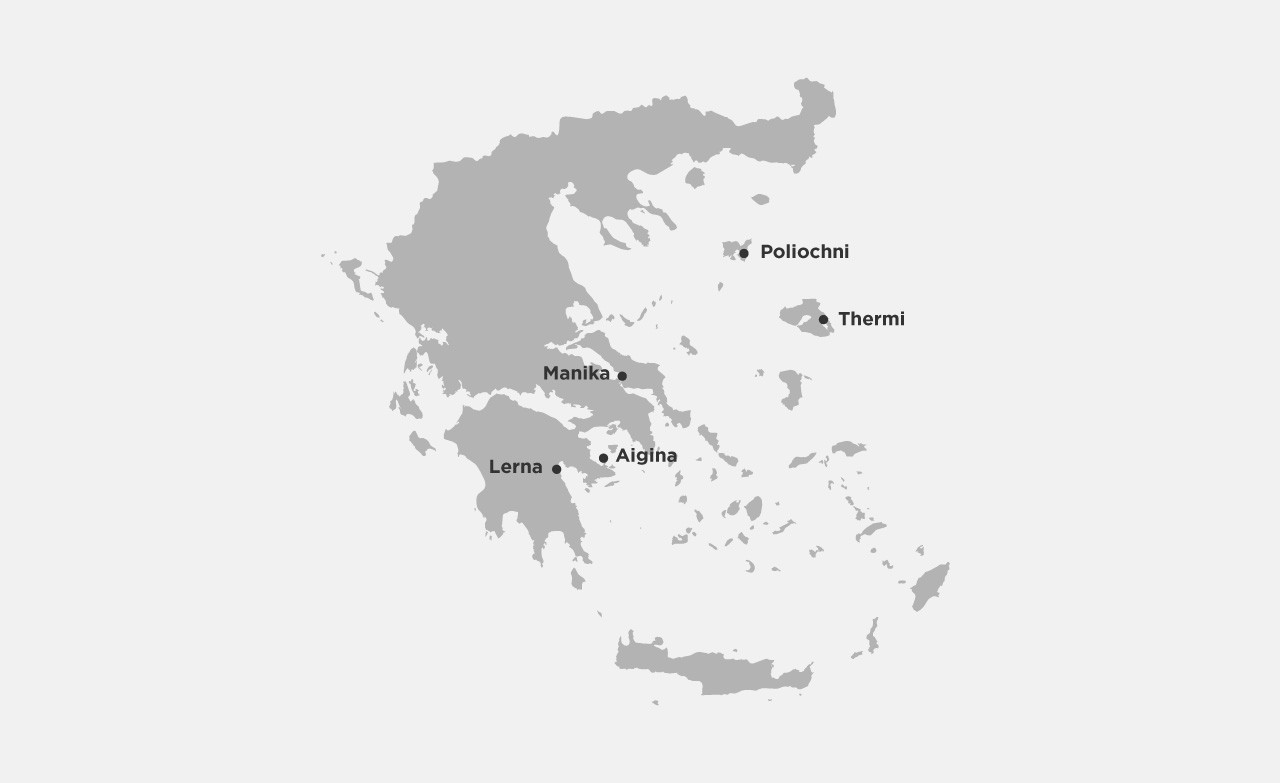 Towards the end of the fourth millennium BC, profound cultural and social changes took place in the Aegean, signaling the end of the Neolithic way of life.

The most important development was undoubtedly the introduction of metallurgy from the Near East. The use of metals substantially improved the quality of the tool kit in almost all sectors of activity (farming, tree-felling, architecture, shipbuilding, etc.) and enabled the production of more effective bronze weapons that altered the nature of warfare. Other changes observed in this period include the introduction of new crops, such as the olive and the grapevine, the rapid increase in maritime contacts, and widening trade networks.

Improved living conditions led to population growth, which is reflected as early as 2700-2500 BC by the emergence of proto-urban settlements (Poliochni, Thermi, Troy, Manika, Aigina, Lerna). Several of these settlements, such as Troy and Poliochni, were established at strategic points controlling important sea routes and were fortified with mighty walls, perhaps in response to conflicts between communities over access to metal sources and trade networks. The importance of bronze as a symbol of wealth and status, as well as the growth of trade and craft specialization, contributed to the appearance of more complex social organization. Social differentiation is particularly visible in the mortuary practices of Crete and the Greek mainland, such as the construction of large tombs for multiple burials and the presence of extravagant grave goods.

Within this environment, four distinct contemporaneous “cultures” developed in the Aegean region: the Early Minoan culture on Crete, the Early Helladic culture on the Greek Mainland, the Early Cycladic culture on the islands of the Cyclades, and the Early Bronze Age culture of the Northeast Aegean islands, which was strongly influenced by the coastal regions of Asia Minor. Among these cultures, the one that thrived on the small and arid Cycladic islands holds a special place. Thanks to their strategic position in the central Aegean and their mineral resources (marble, obsidian, etc.), these islands enjoyed a privileged role in trade and became a crossroads and melting pot of diverse cultural influences.

Around 2300 BC, there were upheavals throughout the Aegean, except on Crete. Several settlements were abandoned, others were hastily fortified and maritime trade diminished. Moreover, the appearance of new burial habits as well as new architectural and pottery types has been interpreted by some researchers to suggest the arrival of new population groups in the Aegean region. The reasons for these disturbances are not clear, but they may be associated with conflicts over access to copper and tin (essential for the production of bronze, more durable than either), new methods of warfare due to the use of metal weapons, and demographic pressures caused by the increase in population and the concentration of large numbers of people in urban centres. Whatever the reasons, during the final phase of the period (Early Cycladic III, 2300-2000 BC) the character of Early Cycladic culture changed and arts such as marble sculpting began to decline, disappearing altogether by the end of the 3rd millennium BC. 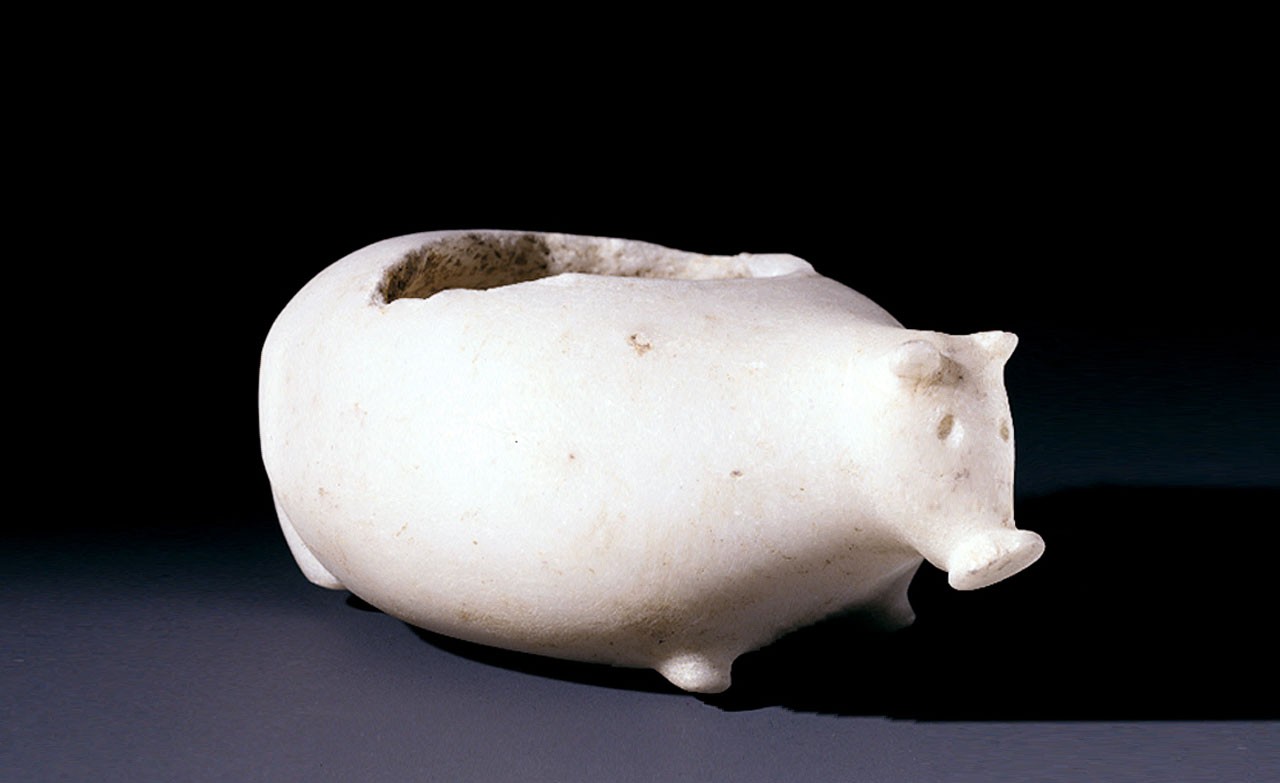 Information from the EC I period comes almost exclusively from cemeteries. Settlement remains are scarce, perhaps because perishable materials were still used for the construction of houses. In contrast, the large number of cemeteries suggests an increase in corresponding habitation sites and thus, in population. During this period, burials were made in simple cist-graves. Pottery was usually decorated using incision. Also in this period, the craft of carving marble starts to develop and the first marble vessels (kandiles, bowls, etc.) and schematic figurines (violin-shaped, spade-shaped) appear. At the closing stages of the EC I period, Cycladic sculptors produced the first naturalistic figurines (Plastiras type). Metallurgy was introduced in the Cyclades but the use of metals – mainly copper – was still limited. There is little contact with other areas of the Aegean. 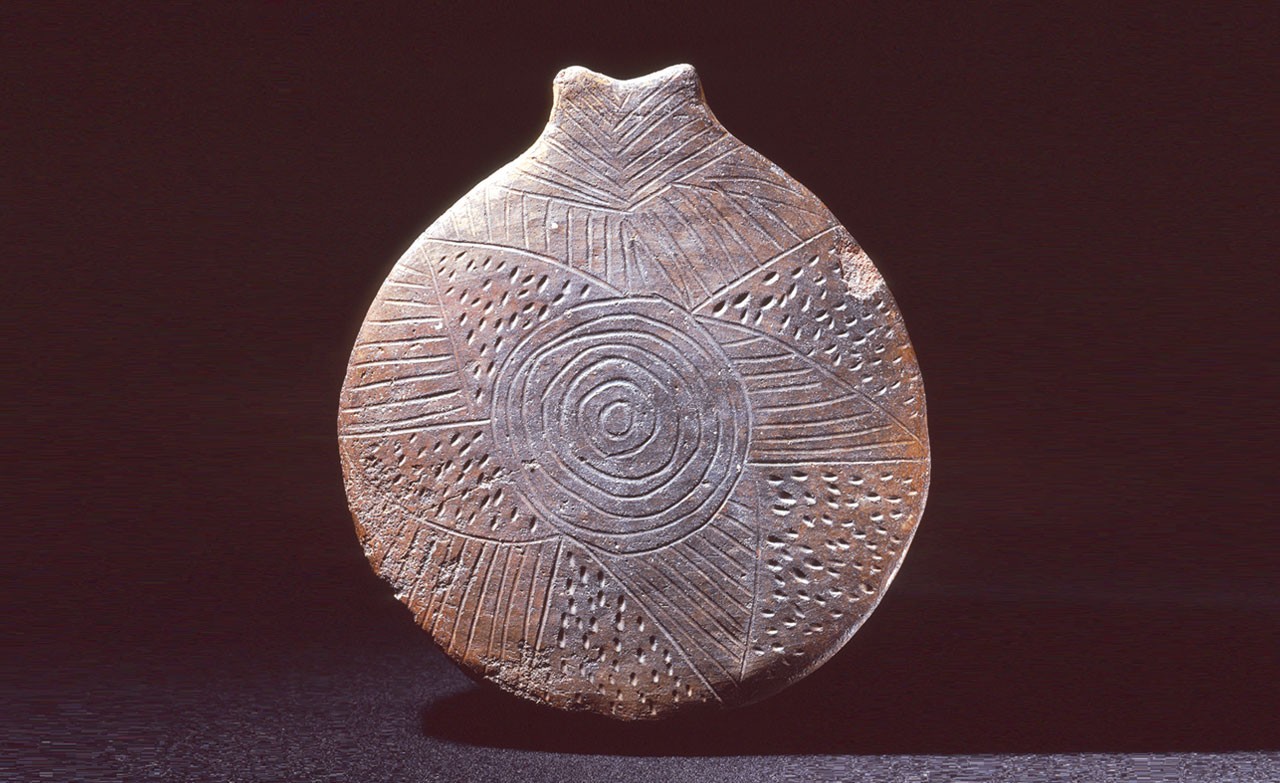 The EC II period was the height of Cycladic culture. Existing settlements seem to have expanded and new ones were established in previously unoccupied areas, a trend paralleled in Mainland Greece (Early Helladic II period) and in Crete (Early Minoan II period) at this time. A new type of earth-cut grave with a lateral entrance was introduced in the Cyclades to be used for multiple burials. Pottery was painted and new shapes, such as the sauce-boats and the “frying-pan,” dominated the ceramic repertoire. Significant advances were made in metallurgy with the manufacture of the first bronze weapons (daggers, spear-heads) and tools. However, the most characteristic feature of the period was the impressive development of marble carving. During this period, Cycladic sculptors skillfully produced a huge number of abstract and highly standardized female figurines, as well as a number of elaborate vessels. At the same time, contacts with Mainland Greece, Crete, and the north and northeast Aegean increased considerably. 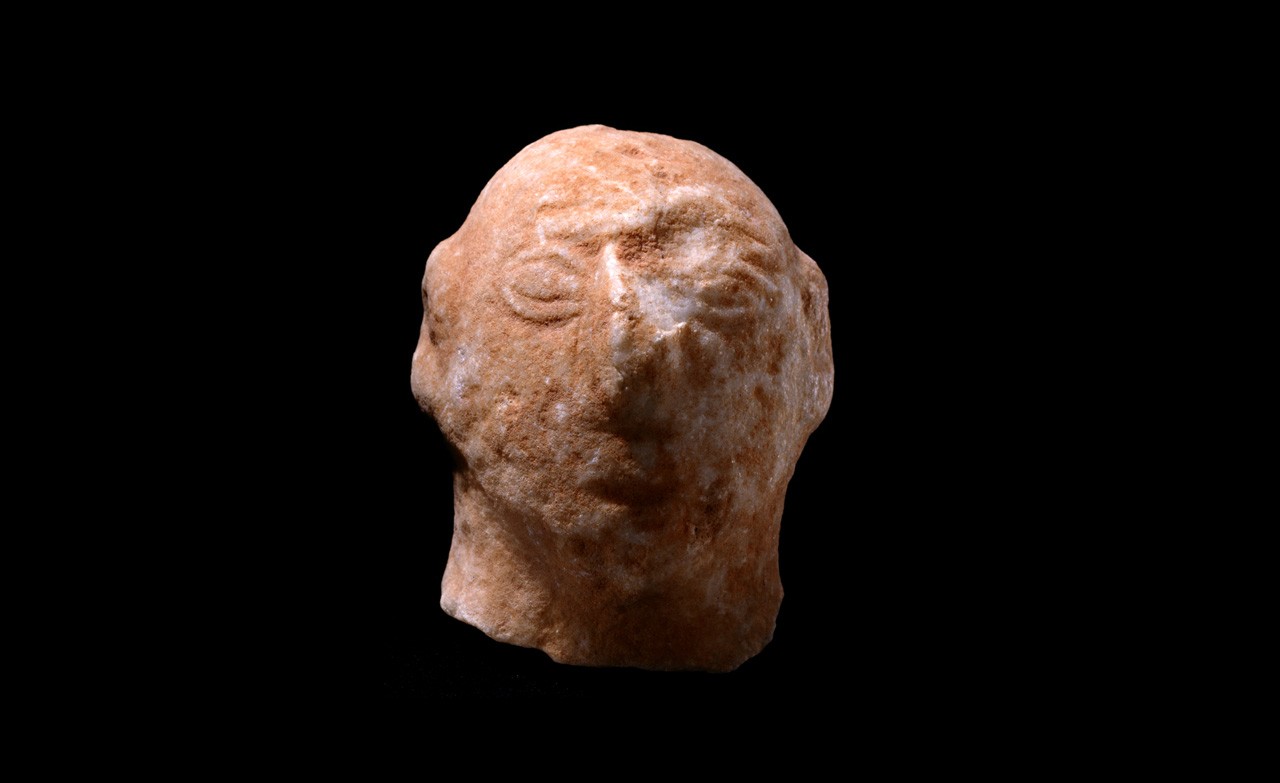 During the EC III period, major changes took place in the Cyclades, the most noticeable being the abandonment of many habitation and burial sites and the construction of fortification walls in several of the surviving settlements. Similar changes have been observed in Mainland Greece and the Anatolian coast at the beginning of this period, possibly reflecting a widespread phenomenon of unrest and instability all over the Aegean. Some scholars interpret these disturbances as the result of migrations and the arrival of new populations in the Aegean. They stress the appearance of new types of pottery and metal artifacts, which seems to have originated in Asia Minor. In the course of this troubled period, the art of marble carving began to decline in the Cyclades, dying out at the end of the 3rd millennium BC.