THE HISTORY OF CYPRUS

The earliest traces of human presence on Cyprus date to the 10th millennium BC and come from the temporary habitation of hunter-gatherer bands in caves.

The first permanent Neolithic settlements appeared towards the end of the 8th millennium BC and were inhabited by small communities of farmers. The long Neolithic Age lasted until the early 4th millennium BC, when a series of technological developments in the wider region of the Near East – and primarily the innovation of metallurgy – brought about important cultural and social changes which affected the entire Eastern Mediterranean basin. 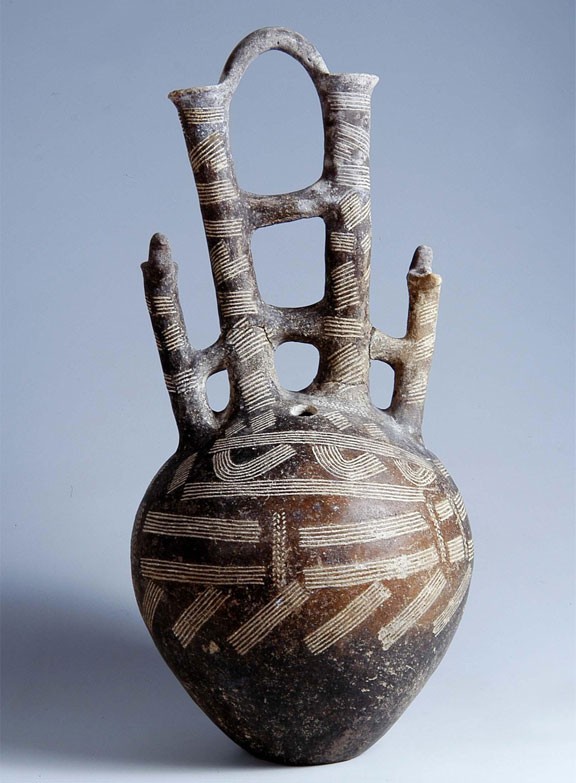 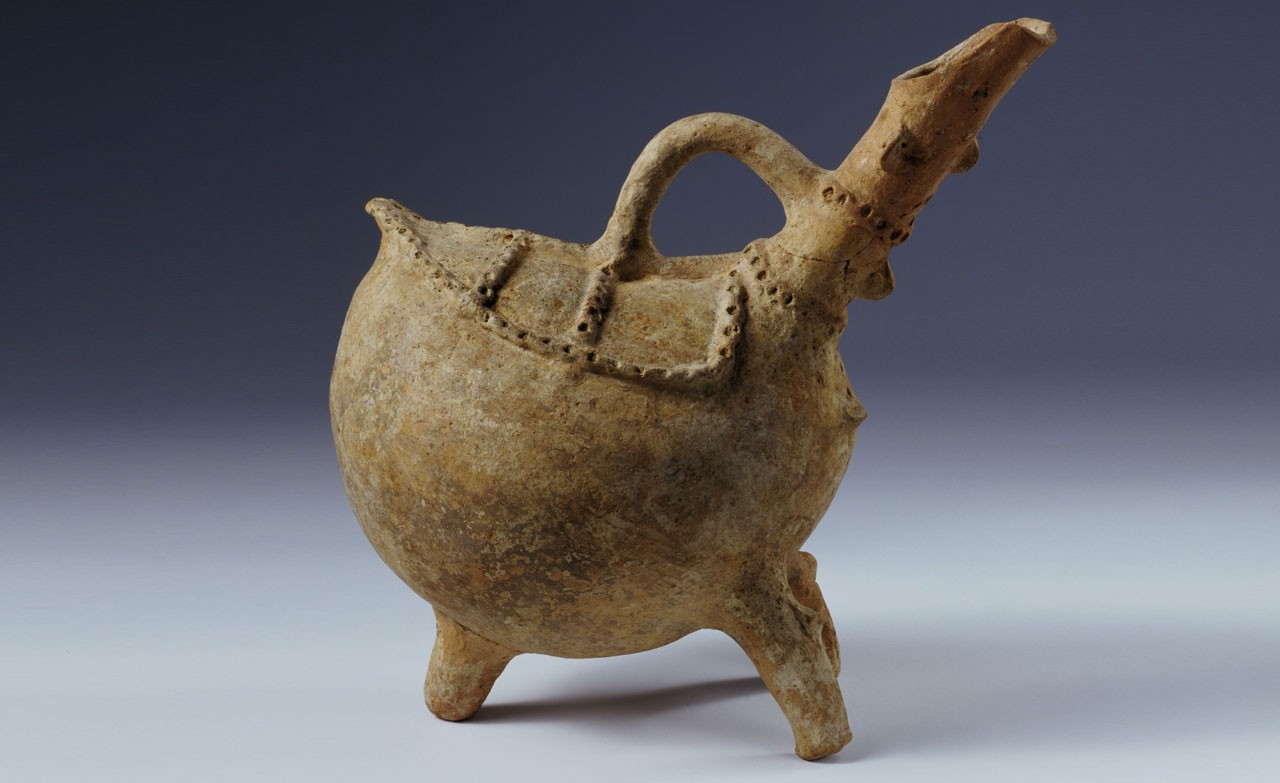 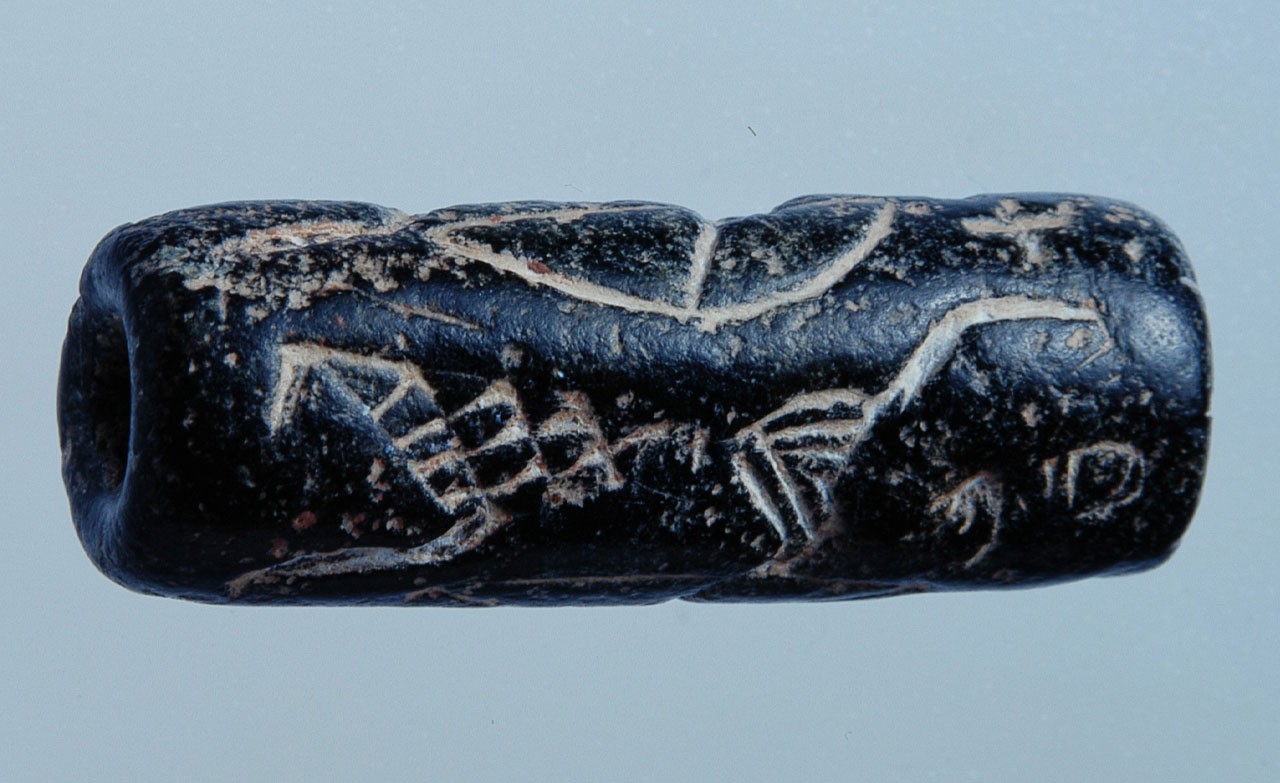 The Chalcolithic period represents a transitional stage between the Neolithic and the Early Bronze Age, and is characterized by the appearance in Cyprus of the first metal objects, mainly small tools of hammered copper. It is still unclear whether copper-working was a local invention or imported from the East. There are no indications of systematic extraction of copper on Cyprus during this period. On the other hand, the evidence for maritime contacts is limited to small quantities of obsidian from Asia Minor. The economy continued to be agricultural, although gradually traits such as the use of seals, the construction of special installations for worship, and increasing diversity in burial habits appeared, suggesting relatively complex forms of social organization. Of particular interest are the abstract female figurines, fashioned from the local stone picrolite, which allude to fertility cults, continuing a long Neolithic tradition.

The transition from the Chalcolithic to the Early Bronze Age was marked by radical changes, most likely caused either by population migrations from the coast of Asia Minor or by internal processes. Old settlements were abandoned and new ones were founded close to water sources and tracts of arable land. The systematic exploitation of the rich copper ore deposits on the island began in this period with techniques of mining, smelting, and working that were possibly introduced from the Near East, where metallurgy was already advanced. By the end of the Early Bronze Age, the Cypriot bronze-smiths had developed their own tradition, producing distinctive types of weapons and tools. Nonetheless, trade continued to be limited and farming remained the basis of the economy.

During the Middle Bronze Age, Cyprus developed more complex forms of social organization and took its place in an international exchange network. The pronounced differences in wealth observed in burials point to more strictly defined social divisions. Many settlements were fortified, probably in response to domestic conflicts rather than to external threats. Religion acquired more complex forms of expression, with specific cult sites and elaborate ritual paraphernalia. The presence of permanent metallurgical installations confirms the increasing importance of copper for the island and there is sound evidence of trade with the Syro-Palestinian coast and Minoan Crete.

During the Late Bronze Age, Cyprus came into its own as a major centre of copper production, supplying the entire Eastern Mediterranean. Settlements with urban organization grew up close to the harbours from which copper ingots and bronze artifacts were shipped to the Aegean, the Middle East, and Egypt, to be bartered or exchanged for various products and luxury goods. In the larger cities, buildings for administrative functions were erected, while a system of writing was adopted from Crete (Cypro-Minoan script), which enabled the Cypriots to cope with the increased bureaucratic need for inventories and archives. The arts flourished and the wealth that flowed into the island led to social inequalities. In the late 13th c. BC, the upheavals sweeping the Eastern Mediterranean, which are usually attributed to the so-called “Sea Peoples”, also affected Cyprus. Several cities were destroyed and waves of refugees arrived from the Aegean. Even so, the island quickly recovered from the dramatic disturbances and regained its role as an important mercantile centre. 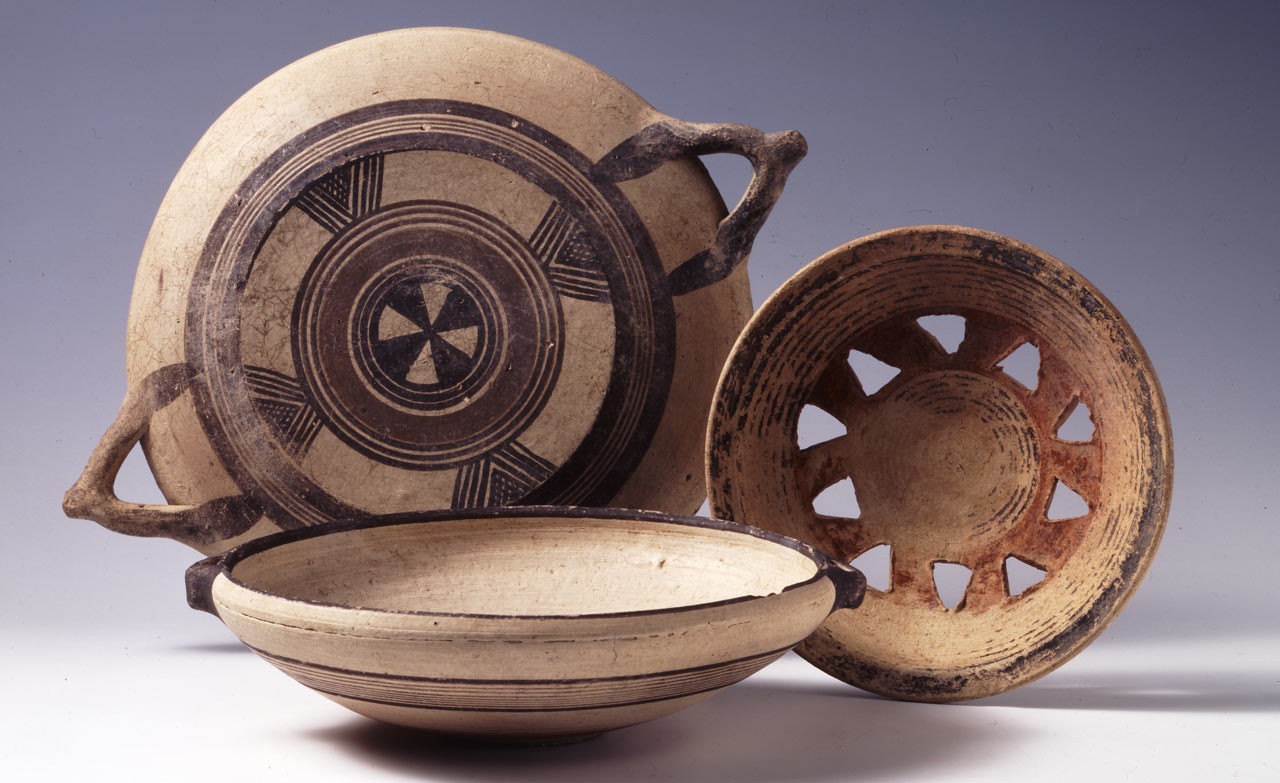 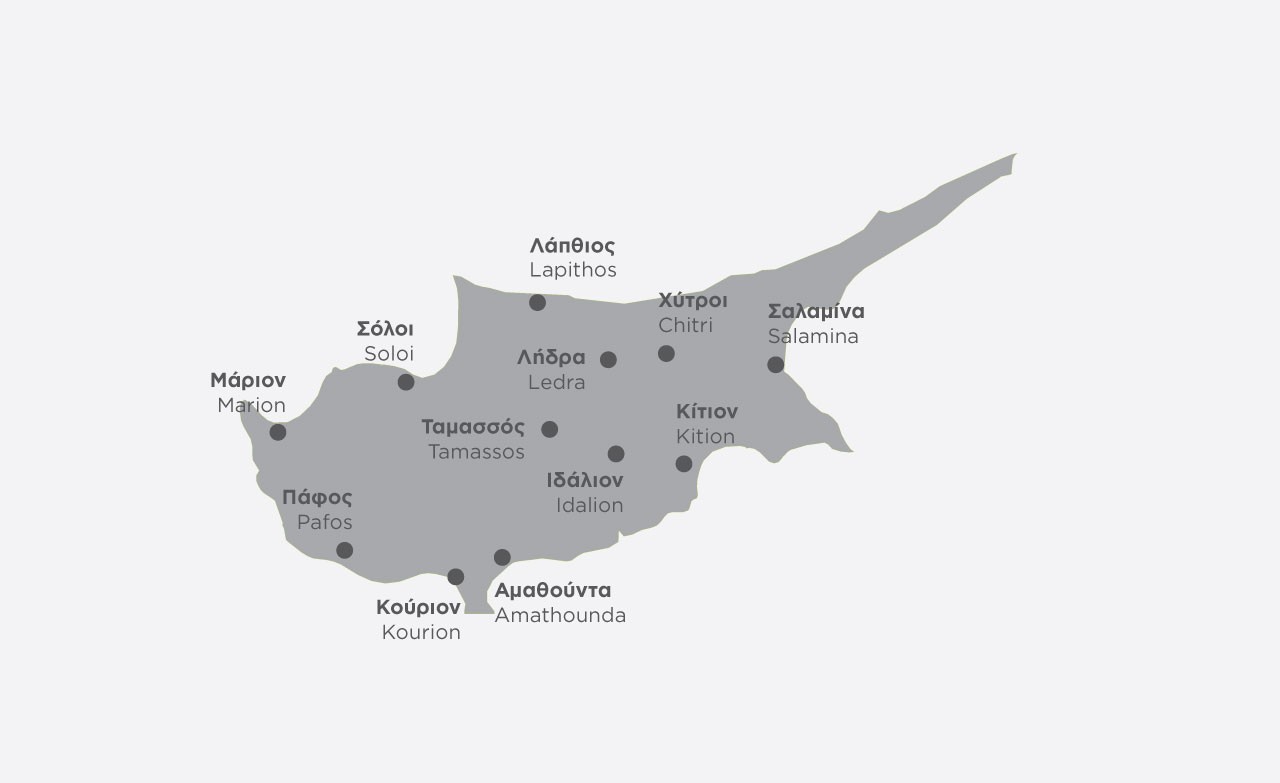 2/3 The capital cities of the 12 Cypriot kingdoms 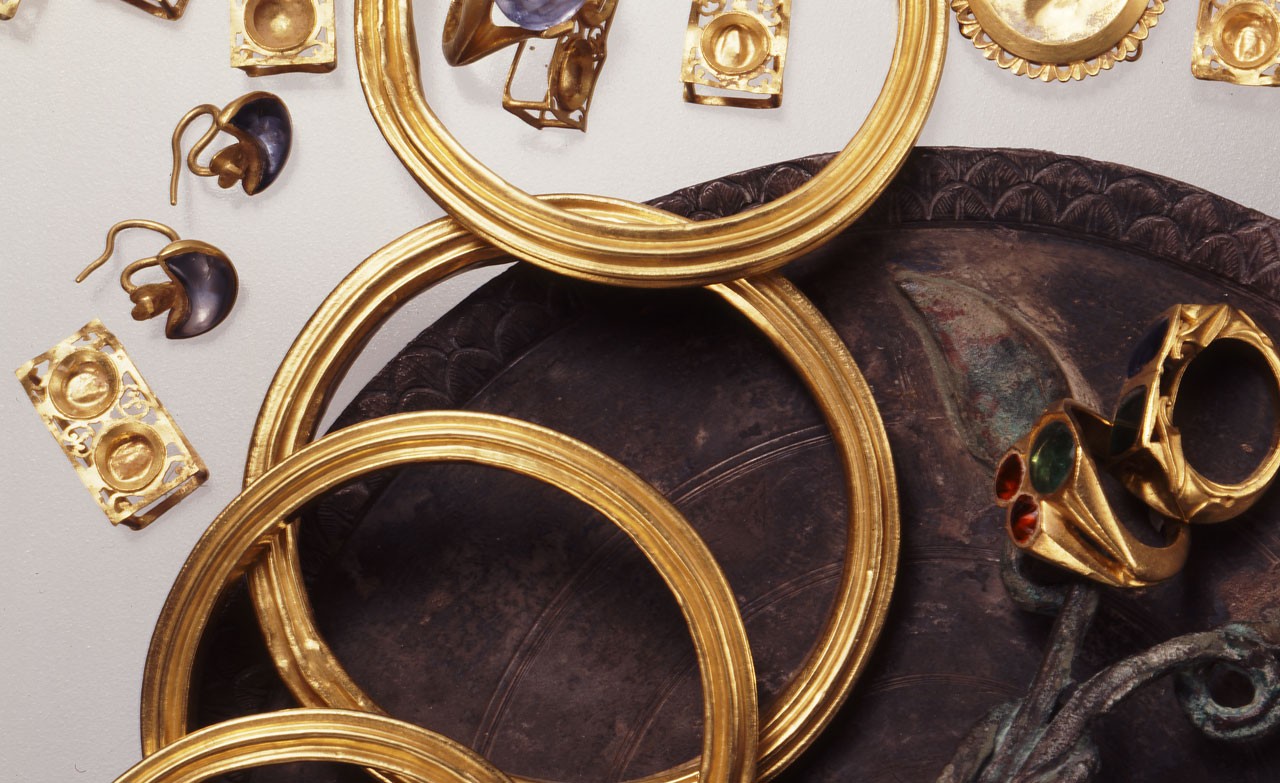 The turmoil in the Eastern Mediterranean during the late 13th and early 12th c. BC affected Cyprus, too. New settlements were established and gradually a new form or political organization, based on ten independent kingdoms, made its appearance. The strategic location and the availability of raw materials (metals and timber) helped Cyprus regain its role as a node of Mediterranean trade, forging anew relations with the Syro-Palestinian littoral, Egypt, and Crete. The founding of a Phoenician colony at Kition in the 9th c. BC gave fresh impetus to commercial activities. New cultural elements were introduced to the island too, such as the Phoenician language and the cult of Astarte (which was later assimilated into the worship of Aphrodite). The art of the period has a distinctly local idiom, despite the influences from the Orient and the Aegean. As early as the 11th c. BC, a new syllabic system of writing (Cypriot syllabary) was developed, which was to be used continuously until the 3rd c. BC for writing the ancient Cypriot and Greek language.

The Archaic period was one of intense political and cultural ferment for Cyprus. In 709 BC, most of the island’s kingdoms were subjugated by Assyria, and remained under Assyrian rule until 669 BC. Then started one of the rare periods of independence for Cyprus, which lasted until 560 BC, when the Cypriot kingdoms were forced to become vassals of Egypt. Egyptian rule was short-lived however, since in 526/5 BC the island was captured by the Persians. In 499 BC, most of the Cypriot kingdoms allied with the Greeks of Ionia in their revolt against the Persians. The effects of the continuous invasions and power changes do not seem to have been negative on Cyprus, which continued to thrive as a centre of trade. However, the insurrection of 499 BC brought Cyprus into closer contact with the Hellenic world.

The Cypro-Classical period was scarred by the Cypriots’ futile struggles against the Persians – frequently at the instigation of the Greeks – which continued until the reign of Alexander the Great. The political and cultural ties with the Aegean in this period reinforced the Hellenic identity of the Cypriots and directed the arts, particularly sculpture, towards Hellenic models. Many oriental deities were identified with Greek ones (Astarte with Aphrodite, Anat with Athena, Melkar with Herakles, Resef with Apollo, and Baal with Zeus) and the Greek alphabet began to be used in the latter years of the 5th c. BC, alongside the existing Cypro-syllabic script. An analogous tendency of “Hellenization” is observed in other sectors too, such as coinage, jewellery, dress, and objects for domestic use.

The dissolution of the Persian State by Alexander the Great granted Cyprus a brief interlude of independence, however, soon, the island was incorporated into the Ptolemaic kingdom of Egypt (294 BC). This brought the demise of the old Cypriot kingdoms and the creation of a more centralizing authority, which was exercised by a plenipotentiary of the Ptolemies, the strategos, based initially at Salamis and later at Nea Paphos. Cyprus was of vital importance to the Ptolemies due to its strategic position, rich copper ores, and abundant timber, which was essential for shipbuilding. The island’s art turned towards the contemporary cosmopolitan currents of the Hellenistic koine, reflecting influences from both Egypt and the Greek Mainland. The Greek alphabet prevailed, while many Egyptian elements were adopted in religion, such as the worship of kings and rulers.

The strategic location of Cyprus in relation to Egypt made it a source of tension between the Ptolemies and the Romans during the second half of the 1st c. BC, with resultant political instability on the island. When Rome finally prevailed, Cyprus came under Roman rule (30 BC) and was declared a senatorial province (22 BC), with Paphos as capital. The Romans were interested in the island’s wealth and imposed heavy taxes. At the same time however, they carried out important infrastructure works and adorned the cities with grand civic buildings and splendid artworks, particularly during the reigns of Trajan and Hadrian. The language and culture of Cyprus remained Greek, continuing the Hellenistic tradition, while in AD 45 Paul the Apostle and his disciple Barnabas visited the island and preached Christianity. The resistance of the large Jewish community of Cyprus to the new religion came to a head with the Jewish Uprising against the Romans in AD 115-117, which ended in the final expulsion of the Jews from the island by Emperor Trajan. The Christian communities grew and at the First Ecumenical Synod of Nicaea (AD 325), Cyprus was represented by three bishops. After the division of the Roman Empire (AD 395), the history of the island was linked inextricably with that of the Byzantine Empire.