The Art of Cyprus

The Art of Cyprus 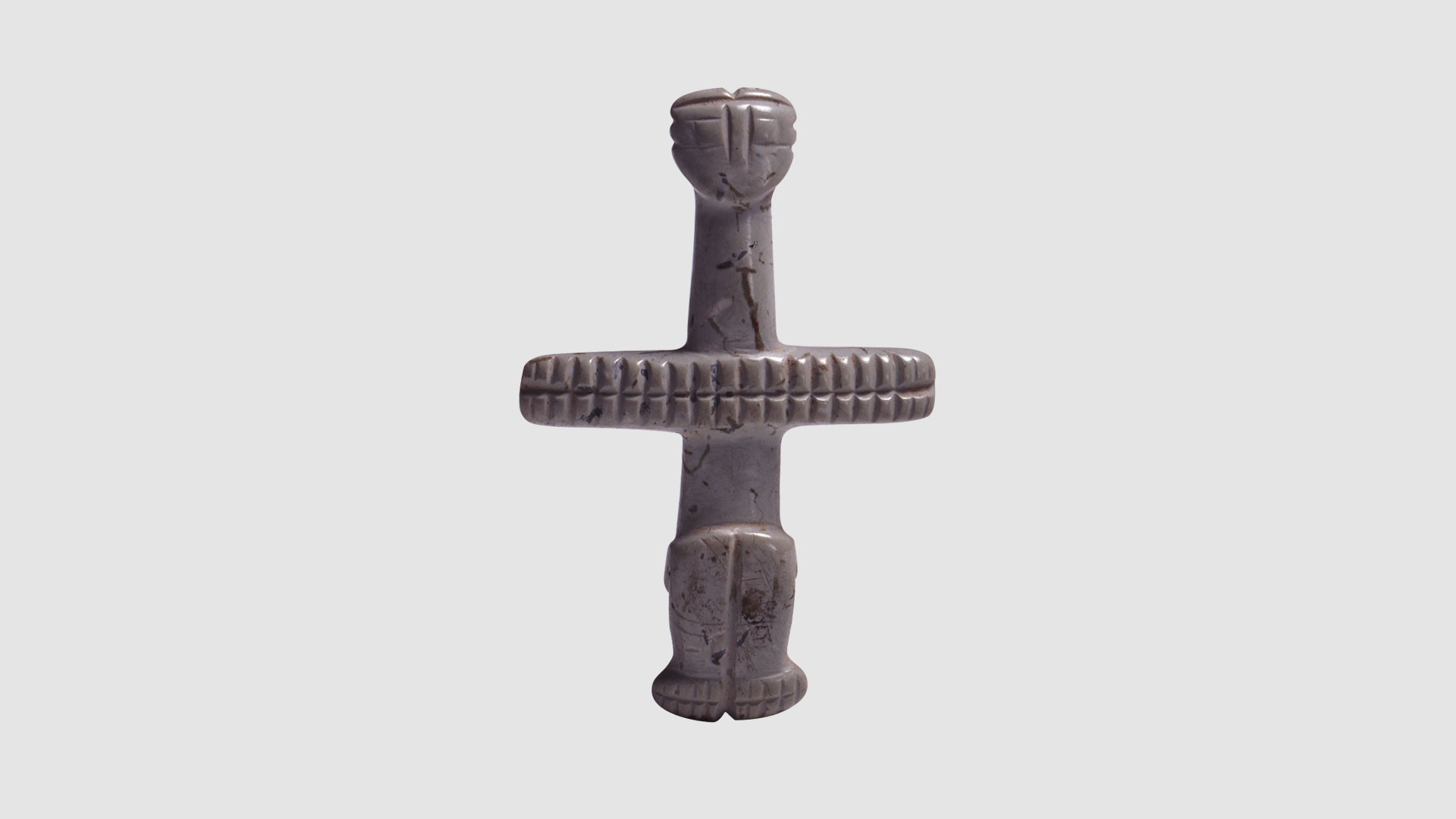 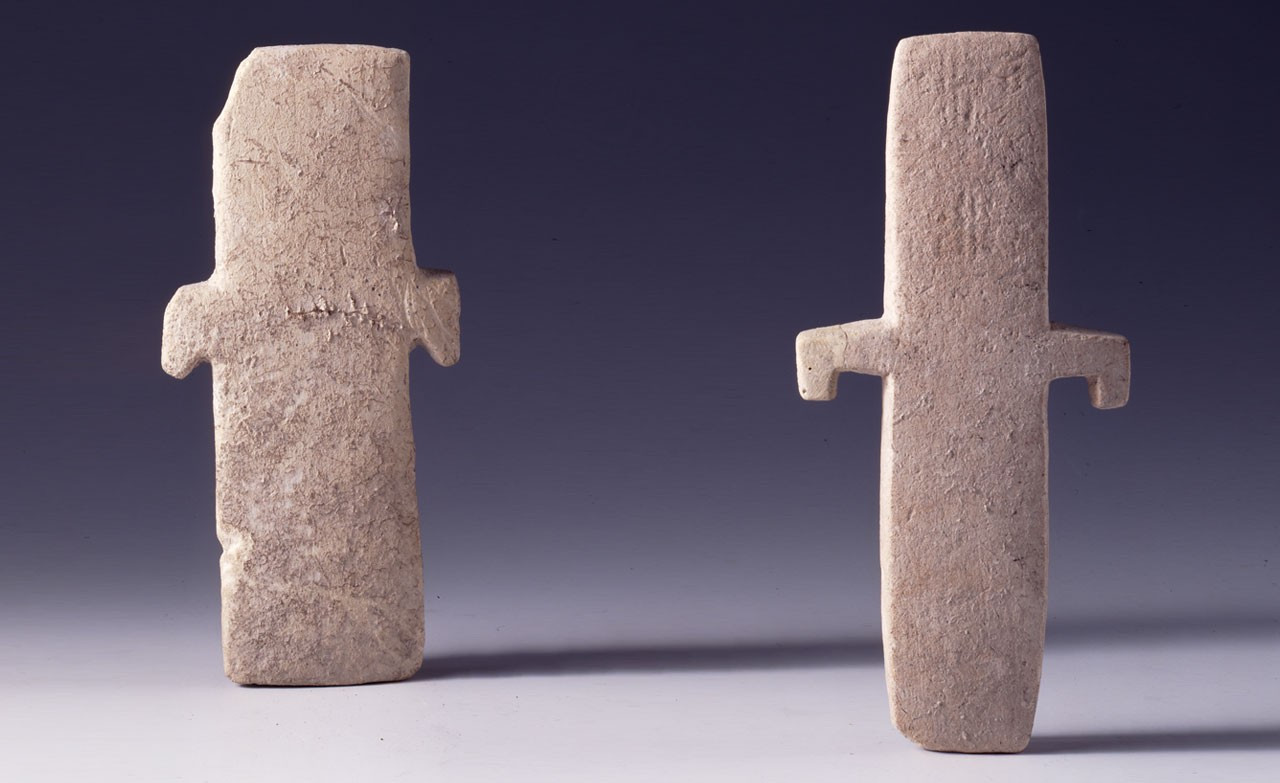 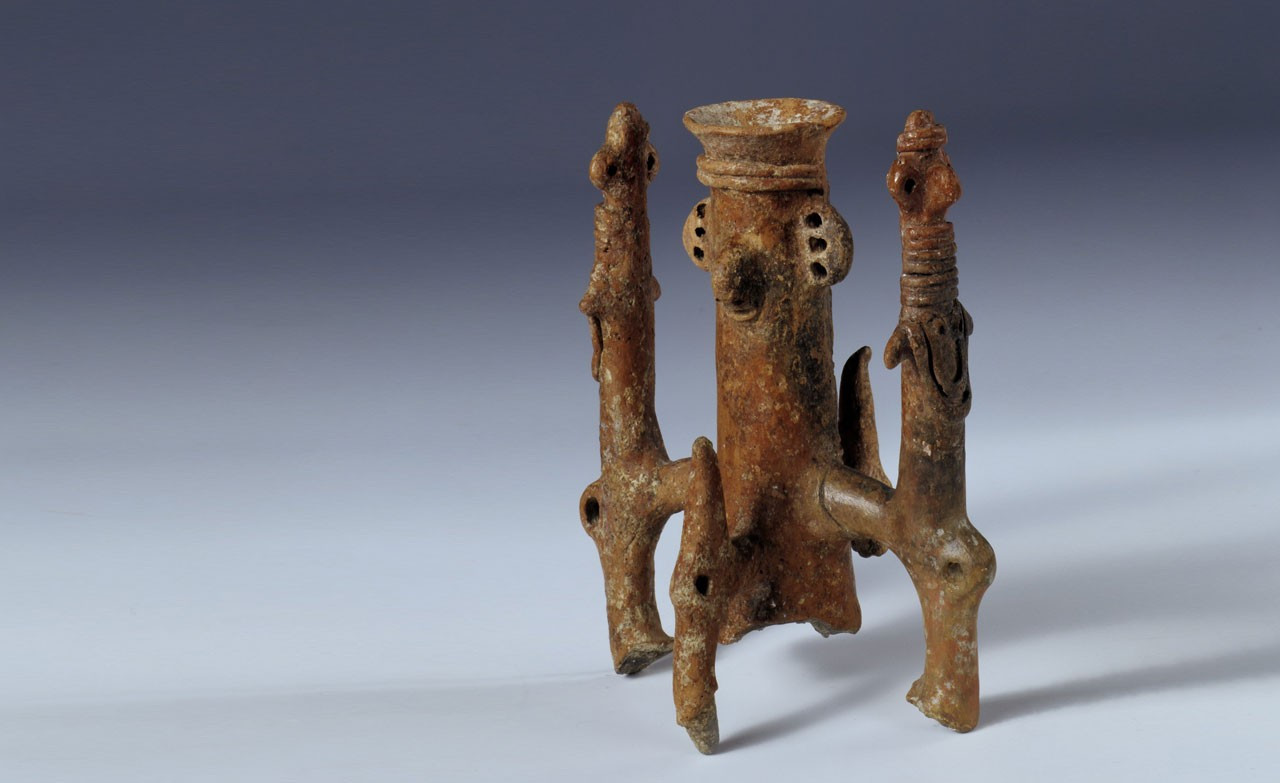 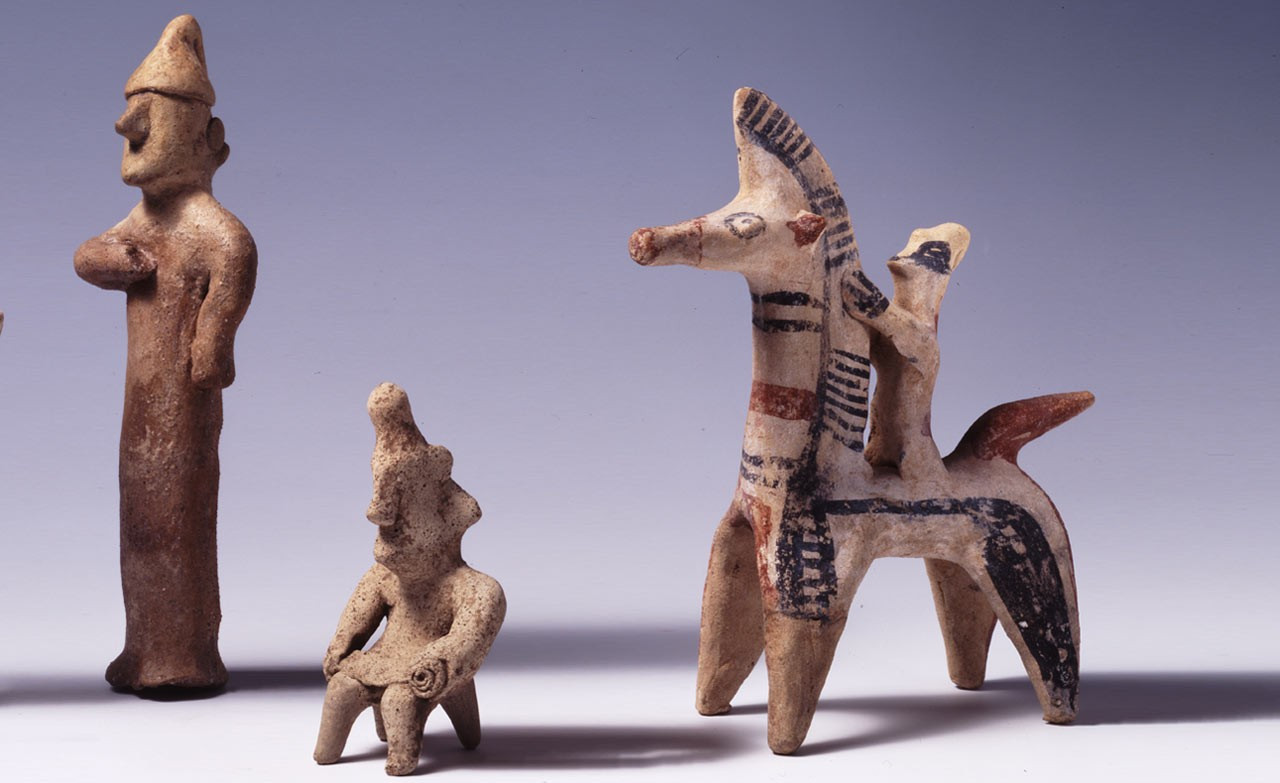 In the Chalcolithic period (3900-2500 BC) a considerable number of highly stylized human figurines were produced in Cyprus. They were made of soft stone (picrolite or serpentine) and had usually a cruciform appearance. Cruciform figurines have most probably developed from the stump-like figurines of the preceding Neolithic period, but are thinner and more slender than their predecessors. They have a high neck, disproportionately large flattish head slightly tilted back, extended arms, and legs bent at the knees or in a squatting posture. Some of them bear suspension-hole in the upper part of the head and were apparently worn as pendants. In some cases two figures are represented, one perched on top of the other, or in cross-like arrangement – forerunners perhaps of the double deities encountered in many prehistoric Mediterranean cults. Sex is rarely indicated by breasts rendered in relief. The size of the figurines ranges from 5 to 15 cm. They are mostly found in child and female burials, and in all probability reflect religious beliefs about fertility and re-generation. They may have been linked with the cult of the Great Mother Goddess or with practices associated with childbirth. It may not be coincidence that the district of Paphos (where many such figurines have been found) became in historical times the focus of worship of another fertility goddess, Aphrodite – although the gap in time is admittedly too large to suggest religious continuity.

During the Early and Middle Bronze Age (c. 2000-1600 BC) plank-shaped statuettes made of clay became the most common form of human representation in Cypriot art. They are highly stylized, with flat rectangular body and a narrower head and neck. Facial features and ornaments are indicated by incised and painted patterns (similar to those appearing on Red-Polished or White-Painted vases) with the exception of noses and occasionally ears and breasts that are often modelled. In some cases, a single body is crowned by two heads. There are also examples of female figures holding a child. Such figurines are usually found in tombs, although a few come from settlement contexts. Their appearance is generally associated with migrants from Anatolia, where similar figurines were used from an earlier date.
During the Early Cypriote III - Middle Cypriote I period (c. 2000-1900 BC), plank-shaped figures were sometimes copied in stone (e.g. chalk, limestone, gypsum, alabaster, and occasionally local marble). Stone figures are rare and come mainly from graves. They are comparatively large in size and extremely schematic in style. They have a plain rectangular body with angular protrusions for the arms. Some have pierced ears and bear traces of paint or punctured dots on the face. It is possible that stone figures were originally painted all over or adorned with jewellery, as suggested by the decoration on terracotta examples.

The function of Cypriot stone plank-figurines is not clear. Contemporary clay models of sanctuaries bear similar figures, which are generally considered to indicate the wooden statues (called xoana) venerated in rituals associated with fertility, birth and death. The large stone figurines may have been used as substitutes for xoana in funeral ceremonies; they may have been carried around in procession before being deposited in the tomb.

In the Late Bronze Age, a new type of female figurine became popular in Cyprus. It had a curving rather than straight outline, with wide hips, arms supporting the breasts and incised details – including the pubic triangle. Eyes were rendered by round pellets and the ears were frequently large, flanged and decorated with plastic earrings. Some examples are shown holding an infant in the left arm. The type derives from Syrian prototypes, themselves apparently inspired by Mesopotamian figurines. It is generally believed to represent a fertility deity, plausibly associated with the great Near Eastern goddess Isthar. By that time, contacts between Cyprus and the Near East were intense, and interactions both in religious beliefs and iconographic representations quite common.

Quite often, Cypriot potters represented the human form on clay vases. They did so either in relief on the neck of the pot, or by shaping the mouth and handle of the vessel in a way that roughly resembled the human head. Vases of that type were made already in the later part of the Early Bronze Age but became common mainly in the Late Bronze Age. The custom of providing vases with anthropomorphic characteristics survived in Cyprus well into the first millennium. Their relatively small number, however, suggests that they may have been used for ritual purposes.

Figurines of the historical periods

Cypriots were very productive in terracotta sculptures of all sizes. The ceramic workshops that specialized in the manufacture of figurines were often located close to important sanctuaries. The simpler figurines were handmade. They had cylindrical bodies and crude faces; in some cases, plain clay trails or pellets were added to form such features as hats, eyes, ears etc. (the so-called snowman technique). A small number of figurines were thrown on the potter’s wheel. From the 7th c. BC onwards, increasing demand led to the introduction of the mould for the mass production of figurines.

The Cypriots worshiped their ancestral gods mainly in rural sanctuaries, in which they believed they dwelt. They thought that the deities participated in religious ceremonies and music festivals. Accordingly, they offered to divinities a variety of dedications, including terracotta models of warriors, riders, chariots, animals, musicians, priestesses, worshipers, as well as clay anthropomorphic and zoomorphic masks.

Male figurines (soldiers, horsemen, charioteers, worshipers) are usually associated with sanctuaries of male divinities. A characteristic example is the sanctuary of Ayia Irini on the north-west coast of Cyprus. Here, a huge number of terracotta figurines of various sizes (even life-size) were found placed around the altar. Dated in the Cypro-Archaic period (7th-6th c. BC), they are considered dedications associated with a male divinity that seems to have been worshiped in more than one capacity.

Female figurines were usually related to the cult of the Great Mother Goddess. The worship of a female fertility deity, possibly identified with Astarte (Ishtar), is attested in Cyprus already from the Bronze Age. During the Geometric and Archaic periods, the Near Eastern Astarte merged with the local Aphrodite, who was venerated in Cyprus in large temples, such as those at Kition and Palaepaphos, as well as in numerous rural sanctuaries. There are several iconographic types, all related to ritual activities associated with the cult of a fertility deity: priestesses with hieratic garments, frequently holding powerful symbols of fertility, such as birds, flowers or fruits; worshippers with uplifted arms; musicians (tambourine and flute players); ceremonial dancers. There is also a number of nude female figurines; this type had been extensively used in North Syria to depict Astarte but was rather strange to Cyprus, where female figures were almost always shown dressed. Female figurines are frequently found in graves, too, suggesting that the fertility goddess was also a symbol of regeneration.

Cypriot artists did not produce only models of worshipers and priestesses. A number of figurines represented genre themes (scribes, actors, scenes of rural life), mythological creatures, animals etc. Most of these figurines had certainly religious connotations. However, some of them, especially those representing animals, were apparently toys (some of them contain small stones or seeds and had been used as rattles). 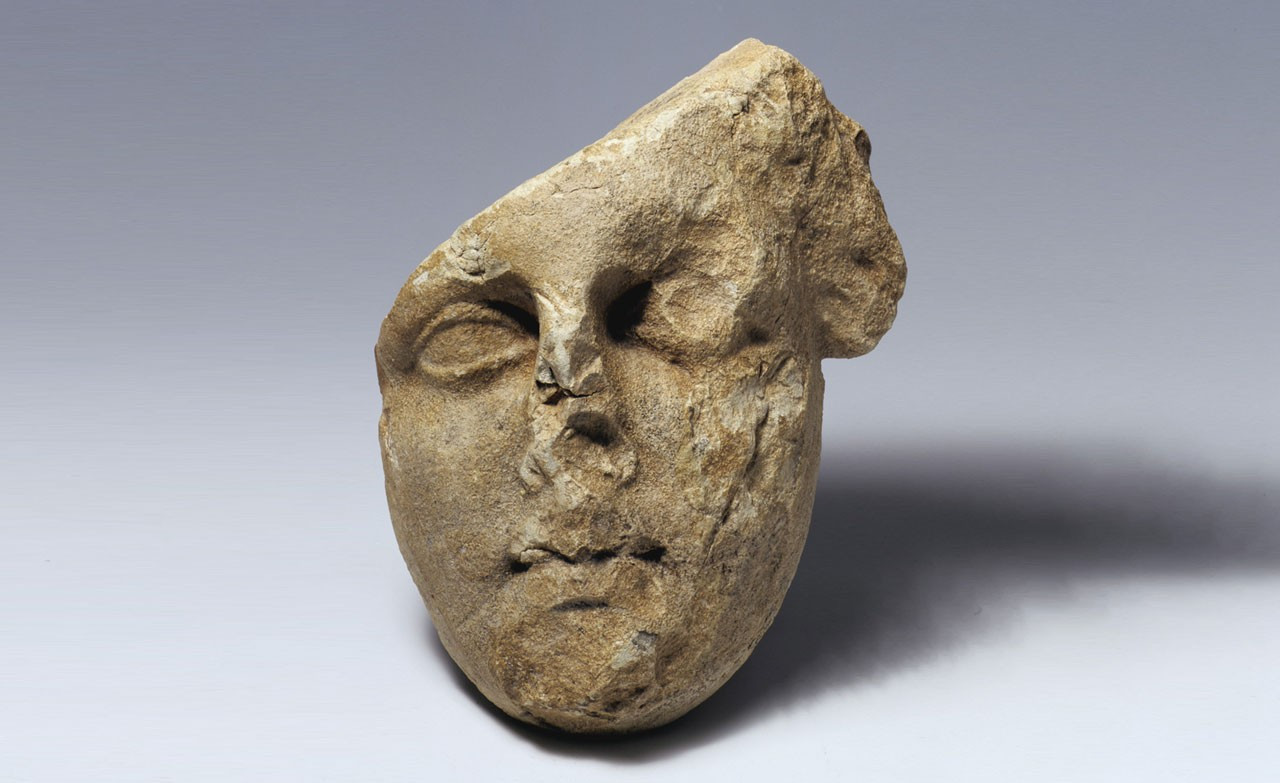 Sculpture began to develop in Cyprus during the 7th c. BC. Cyprus had no seams of marble, so local sculptors were obliged to work on the soft, local limestone. This material is far from ideal for carving, therefore the details were frequently incised or painted. Marble was imported to the island in small quantities from Greece or Asia Minor.

The earliest Cypriot style dates to c. 670 BC and has developed under strong Near Eastern (in particular northern Syrian) influence. This is not surprising given that Cypriot kingdoms were subject to Assyria between 709 and 669 BC. The predominant scenes of the period, either in statues or on reliefs, were of a military nature, showing men with massive bodies and pronounced facial features dressed in typically Assyrian fashion.

From 570 BC onwards, Cypriots started to assimilate elements of Egyptian and eastern-Ionian sculpture and combine them with local features. Monumental sculpture became common, the main features being the frontal treatment of the figures and the concealment of the body beneath the clothing. The faces were triangular or oval, with a severe expression, large eyes and thick eyebrows. The hair of both male and female figures hanged on the shoulders. Male figures often wore conical hats of oriental type, and their beards were triangular, recalling those of Near Eastern rulers. Female figures wore elaborate jewellery and full-length chitons. There were also, several, interesting examples of kouroi and korai. As, however, Cypriot sculptors were governed by a spirit of conservatism, they preferred to render the bodies of the kouroi clothed (by contrast to their naked Greek counterparts), with the Archaic smile imprinted on their faces. At the same time, female figures started to recall the Ionian korai. Several Cypriot statues of that period were dedicated to shrines in Rhodes, Samos, Asia Minor, and Naukratis in Egypt.

Starting from 540 BC contacts between Cyprus and the Aegean became closer, partly thanks to the common struggle of Cypriots, Ionians and Greeks against the Persians. Ionian influence in sculpture grew stronger, though the vitality and distinctive character of local art was not lost. In the 5th c. BC relations with Greece intensified further, as a result of the policy of the philhellene king of Salamis Evagoras I, who espoused the Greek way of life and Greek ideals. Numerous Greek marble sculptures were imported to the island, heavily influencing local artists who gradually adopted Greek, in particular Attic, styles. In the cemetery of Marion, the expression, clothing and stance of figures on grave stelae clearly imitate Attic models. From now on, Cypriots would follow closely developments in Greek sculpture, including the 4th c. BC swift towards idealism represented by Lysippos and Praxiteles.

In the course of Hellenistic period, Cypriot sculptors were inspired by the prevailing styles of the schools of Alexandria, Athens and Pergamon. In Roman times, artistic styles became highly diffused and internationalized. Cypriot sculpture of that period does not really differ from the official Greco-Roman art. It includes characteristic portraits and statues worked in the round in marble but, also, bronze.