Cycladic art with its anthropocentric character - expressed through perfection and proportion in form - has often been discussed as an art that has strongly influenced early 20th century sculpture. 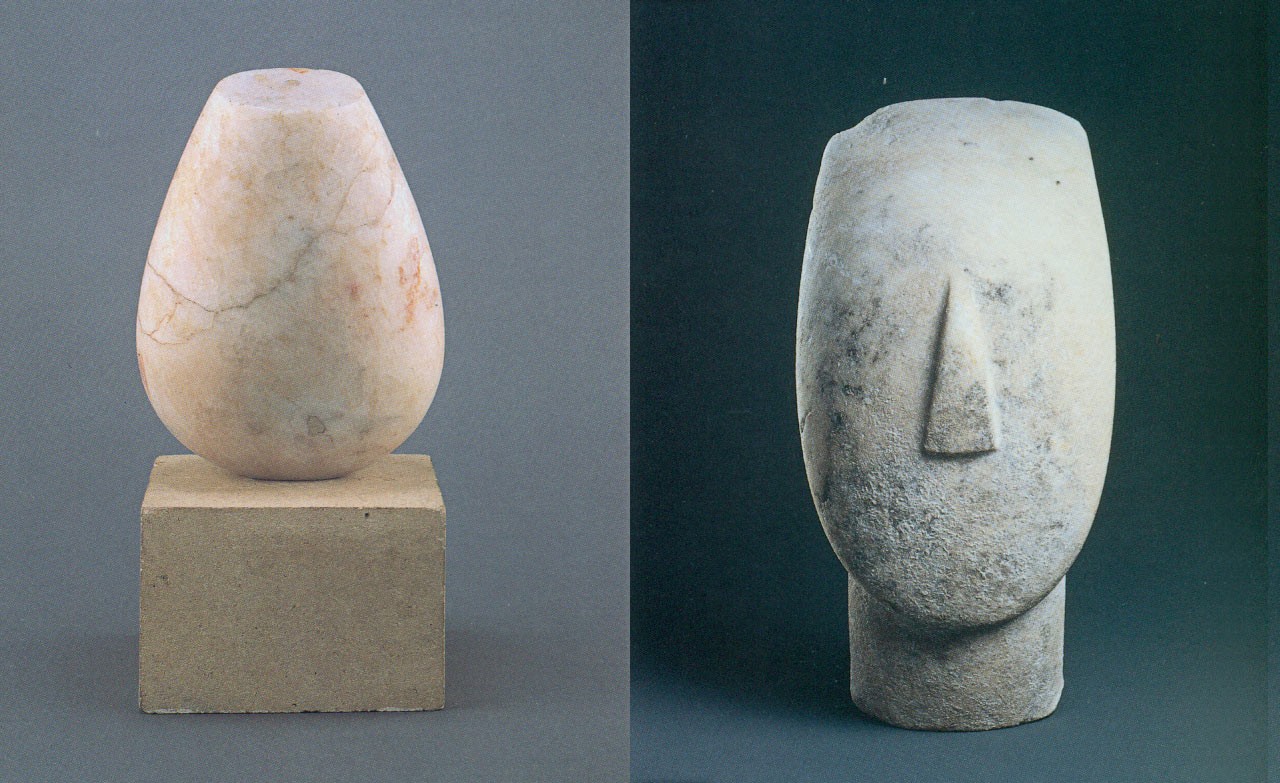 From the exhibition "Shaping the Beginning" 2006

By the last quarter of the 19th century, artists began to explore the creations of earlier or ‘primitive’ civilizations, exposed in museums and ethnological collections. There was also a growing interest in the essence of things; many artists wanted to return to the origins of creative possibilities and therefore experimented with eliminations, reductions, abstraction and refinements.

These elements – inherent in Cycladic art – are seen in the works of 20th century sculptors like Brancusi, Modigliani, Archipenko, Lipchitz, Giacometti, Barbara Hepworth and Henry Moore. Brancusi was one of the first who tried to unburden western art from its excessive decorative elements and make us conscious of shape. In fact, as sculptor J. Epstein observed, Brancusi sought from the very beginning to express essential and archetypal elements, namely features that are recognizable in ancient civilizations.

Works like his many variations of ‘Bird’, the series of ‘Fish’ and ‘Female head’ or his work ‘The Beginning of the World’ (inspired, according to Henry Moore, by a large Cycladic head in the Louvre), were becoming symbols of the idea they represent – as in Cycladic art – and not specific representations of individual objects. In a similar path of research for the essential and experimentation, sculptors like Epstein, Derain, and Modigliani, each attracted to the stark power of inexpressive, immobile heads of ancient civilizations and by the ‘universal reference to humanity’, stripped of all individuality, were abandoning the prevailing academic formalities and realistic representations of the subject.

Elements such as simplicity, abstraction, and yet harmony and vitality, as well as truth to the material – which characterize Cycladic art – were some of the tendencies exploited by early 20th century artists. Archetypal shapes like the oval or ovoid, commonly seen in Cycladic art, also became common forms in modern art. Morphological similarities between Cycladic art – in particular the schematic figurines – and 20th century art can be detected in the works of Hans Arp, Alberto Giacometti (considered to be deeply influenced by the hieratic structure of Cycladic art), Ben Nicholson and Archipenko (in terms of the flatness of his sculptures). Similarities can also be found in the works of Henry Moore, whose anthropocentric sculpture is a direct allocation to Cycladic art, and Barbara Hepworth, one of the first artists to use colour for the details in her sculptures – also an element known to have been applied in Cycladic sculpture.

Another less stressed but equally important common place in all these artists is their choice to use marble, the material with which the Cycladic craftsmen experimented and created unique and unprecedented forms. The preoccupation of modernists with “primitive” or “archaic” cultures had a tremendous impact on the thought and aesthetics of the western world, which was liberated from the confines of representational art and turned its gaze towards abstraction, symbolism and other major currents of the 20th century. At the same time, it changed completely the public’s appreciation for “primitive” art. Under the influence of Brancusi and the likes, Cycladic figurines and other artifacts of prehistoric cultures, previously seen as “ugly”, “vulgar” or even “barbaric”, became objects of admiration and symbols of human values and shared origins. This development, however, had a negative effect, too: the great demand for such artifacts by museums and collectors raised their price on international art markets, fueling an explosion in illicit trafficking of antiquities.