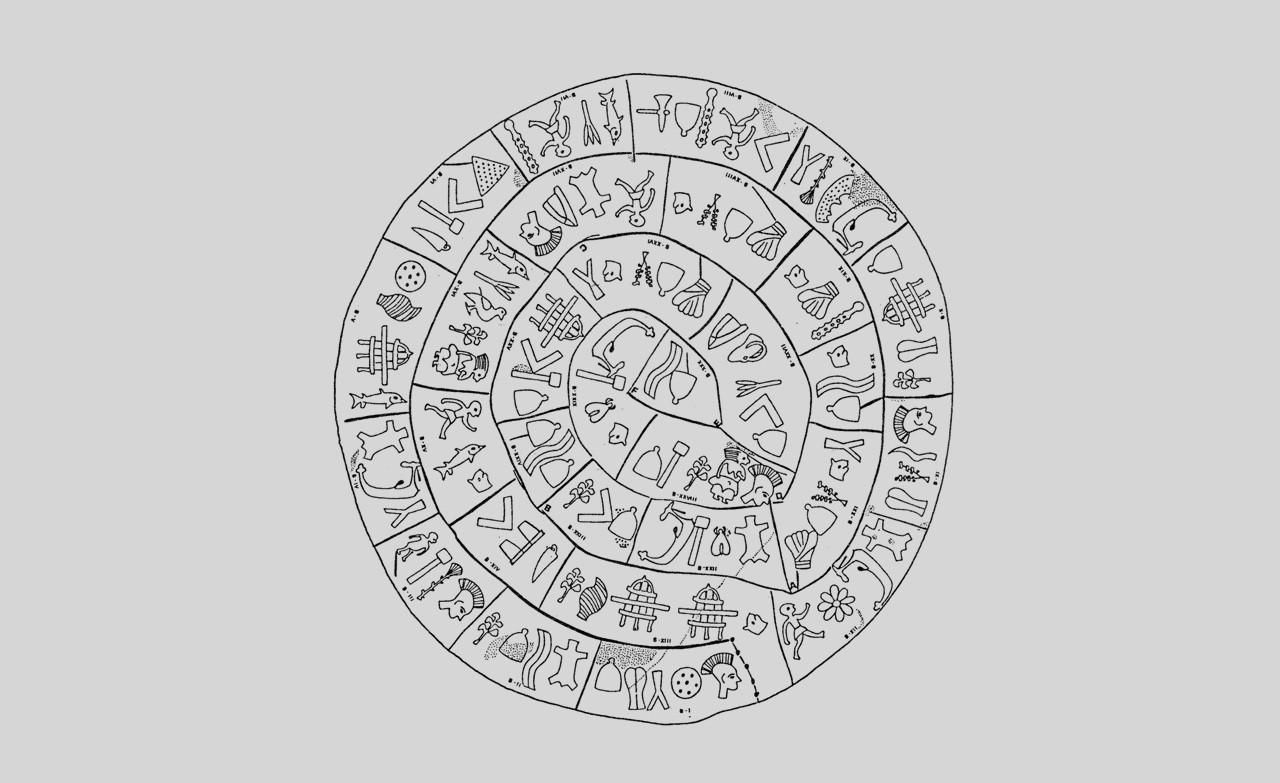 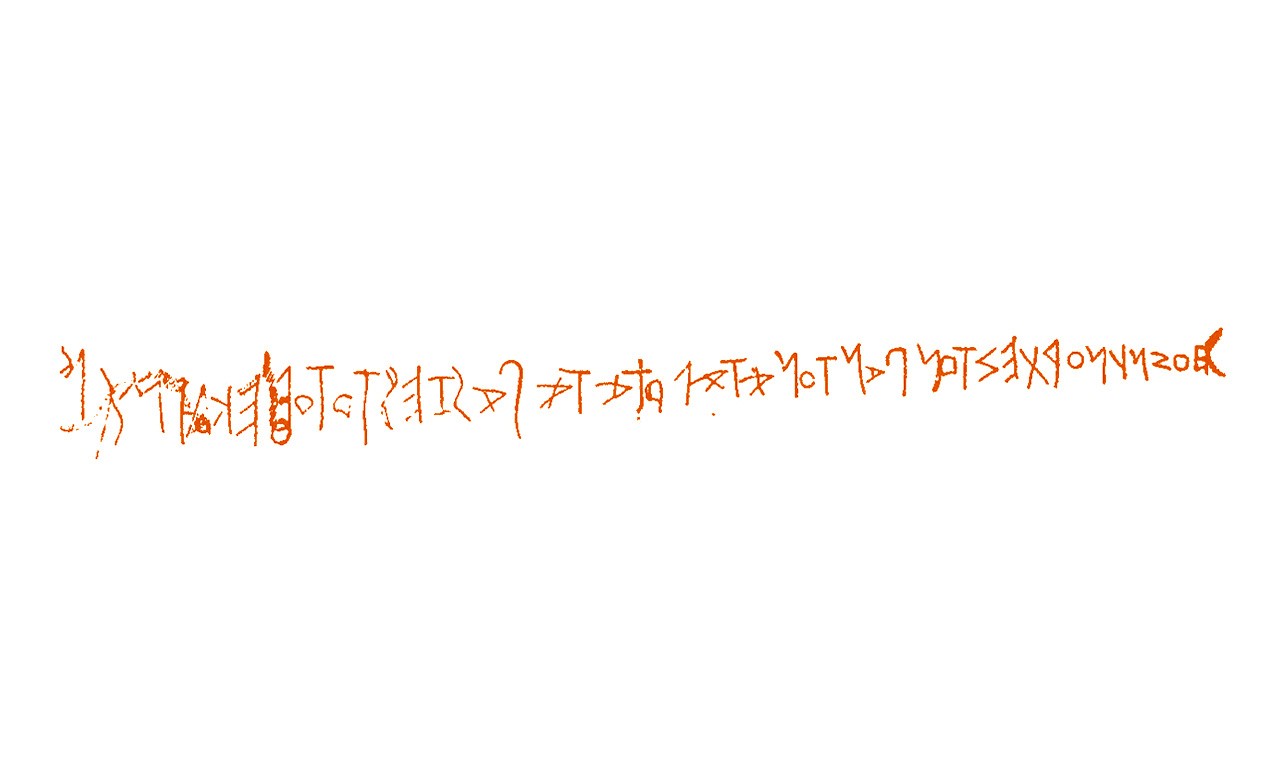 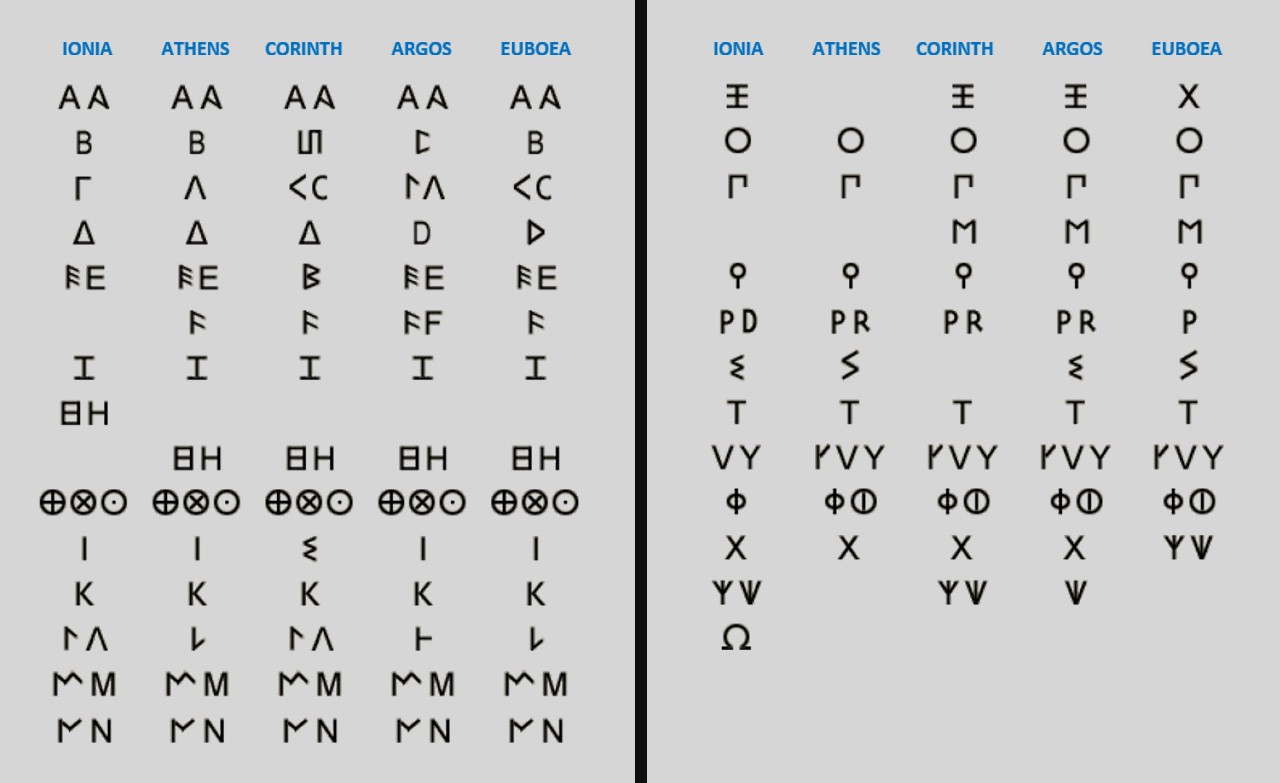 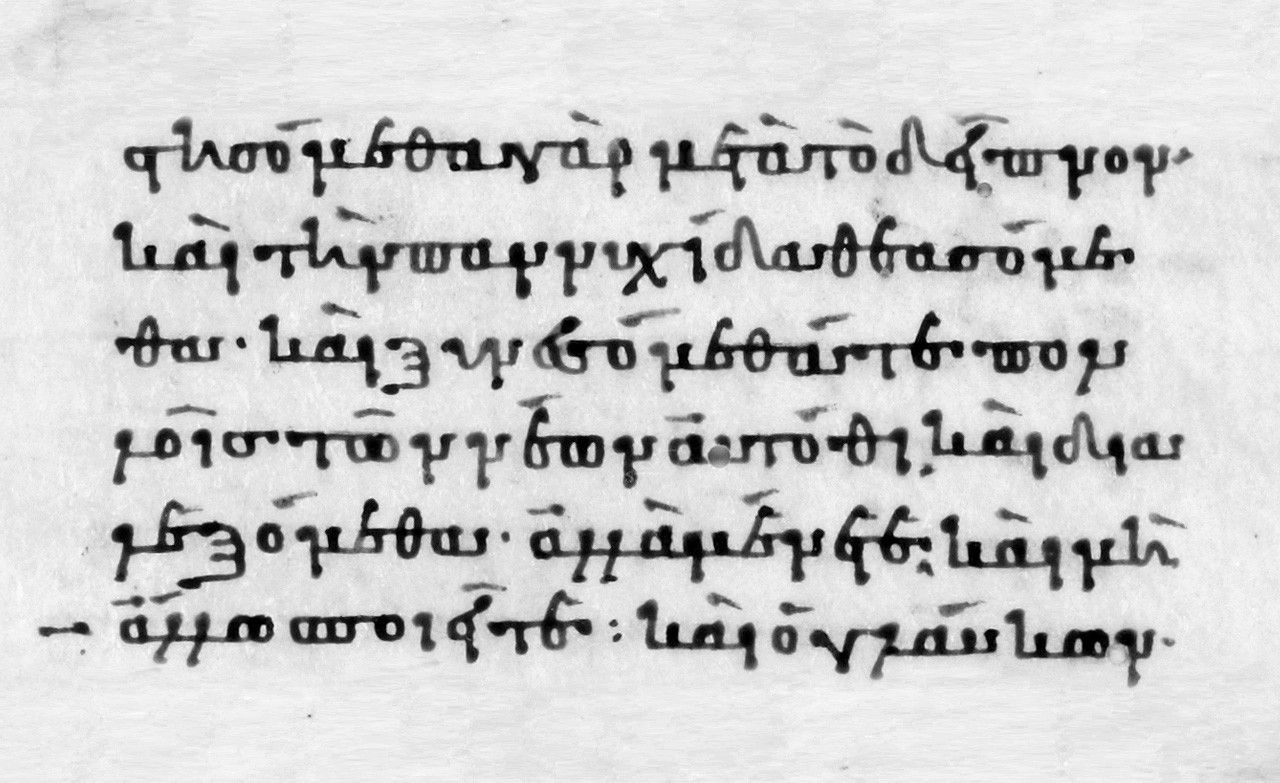 Syllabic scripts in the prehistoric Aegean

Writing first appeared in the Aegean around 2000 BC on the island of Crete. The earliest script was based on the use of pictograms – vaguely similar to the Egyptian ones – and has therefore been termed Cretan Hieroglyphic. Soon, however, it was replaced by a syllabic script (each symbol denoting a syllable) known as Linear A. This script was used mainly for administrative and religious purposes from c. 1800 until the final destruction of Minoan palaces in 1500 BC. Although it has not been deciphered yet, it is clear that the language it records is not Greek.

About 1450 BC (or in the 13th c. BC, according to another view) a new syllabic script, termed Linear B, made its appearance. The new script was used exclusively for administrative purposes in the palatial centres of Crete (Knossos and Kydonia) and Mycenaean Greece (Mycenae, Tiryns, Pylos and Thebes). Records of transactions and taxation were kept on rectangular tablets made of unbaked clay, which were normally stored in archive rooms; outside the palaces Linear B is only occasionally found in the form of isolated signs or inscriptions incised on vases or stone-objects. When Michael Ventris and John Chadwick deciphered Linear B in 1952, it became clear that Mycenaeans spoke an early form of Greek: several geographical and personal names (including the names of gods), adjectives and verbs were apparently Greek. Given that most Linear B symbols have close equivalents in Linear A, it is clear that a few adjustments sufficed to make a syllabic script previously used to write down a non-Greek language (Linear A) suitable for recording an early form of Greek.

Writing was lost from the Aegean after the collapse of Mycenaean palaces at the end of the 13th c. BC. It re-appeared only about 800 BC, in the familiar alphabetic form. According to tradition, the alphabet was a Phoenician invention brought to Greece by Kadmos, the legendary founder of Thebes; in fact the letters of the early Greek alphabets were called “Kadmeian” or “Phoenician”. Modern research has shown that this tradition holds a good part of truth.

The earliest known Greek inscriptions date to circa 775 BC but the form of the letters reminds Phoenician inscriptions of the 10th-9th c. BC. Since, however, contacts between Greeks and Phoenicians became closer only in the later part of the 9th c. BC, it is possible that the transmission of the alphabet took place about 800 BC. The agents of transmission should be sought in one of the areas that had developed commercial relations with the eastern Mediterranean in the Geometric period, namely Euboea, Crete or Rhodes.

In order to fit their language, Greeks had to make a number of adjustments to the Phoenician alphabet, which originally had 22 signs, all corresponding to consonants. They changed the use of some letters in order to render the phonetic values of vowels and added symbols for phonemes that were unknown in Phoenician.
Alongside the alphabet, Greeks adopted also Phoenician ways of writing. The earliest Greek texts and inscriptions were written or carved in Phoenician style, that is either from right to left or “boustrophedon” (literally “as the ox ploughs”, that is one line written from left to right, the next from right to left and so on). The system that reads from left to right appeared in the 6th c. BC and became the standard way of writing only in the 5th c. BC.

The early regional alphabets and the adoption of the Ionic

The alphabetic system was simple to use, thus allowing large parts of the population to become literate. By contrast to the syllabic scripts of Minoans and Mycenaeans, which required special training and were thus reserved exclusively for administrative use, the alphabet became quickly available to individuals as well as institutions. In fact, the earliest known graffiti on vases predate the earliest official inscriptions on stone. From the 6th c. BC onwards, the alphabet was extensively used not only on legal inscriptions, votives and coins but also in grave-markers, vase-painting, etc. Thousands of clay sherds inscribed with the names of candidates for ostracism have been found in the Athenian Agora, testifying to the degree of literacy in the 5th c. BC. Greeks wrote also in organic materials, such as wood, leather, papyrus and parchment, which are not easily preserved.

The wide dissemination of writing led to the emergence of several regional versions of the alphabet, according to the requirements of local dialects and possibly other factors. These “epichoric” (regional) alphabets developed in the course of the 8th c. BC and remained in use for many centuries to come. They were also adopted by the colonies of each city-state. Today we can identify them through differences in the use and the shape of particular letters.

The use of different systems of writing in each region caused a number of problems in communication, exchanges and official correspondence. The need for a common alphabet was felt already from the mid-5th c. BC. The Ionic alphabet of Miletus was approved as the most appropriate one because of its ability to record all types of vowels as well as double consonants (Ξ and Ψ). Athens officially adopted this alphabet in 403 BC to be followed by many other cities in the course of the 4th c. BC.

When Macedonians conquered southern Greece in the middle of the 4th c. BC, they readily adopted the dialect and script used in Attica. Macedonians had not developed their own system of writing, so they were eager to use the Ionic script as an efficient tool for administration and official correspondence. Following Alexander’s conquests, the Ionic script became a vehicle for the dissemination of the Greek language throughout the eastern Mediterranean and the Near East in the form of the so-called “Hellenistic koine”. In the course of the Hellenistic and Roman periods, the Ionic alphabet underwent various morphological changes according to the area and the type of document but, in general, remained in the same basic form until modern times.

One of the major changes that occurred in the Hellenistic period was the invention of accents. Ancient Greeks wrote in capital letters without punctuation or accents. The latter were first used in late Hellenistic times when scholars started studying texts written in an archaic and, thus, not familiar form of Greek (e.g. the Homeric epics). Another reason for the employment of accents was that Greek language was now used for administrative and commercial purposes all over the Hellenistic world by non-native speakers, who inevitably did not know how to pronounce the words.

By that time, however, accents were applied on capital letters, written in a particular way which is known as cursive. Lower case letters (minuscules) were not invented until a very advanced stage, namely the 7th c. AD and are thought to have come about through the degeneration of the cursive script. They were not widely accepted until the 9th c. AD. 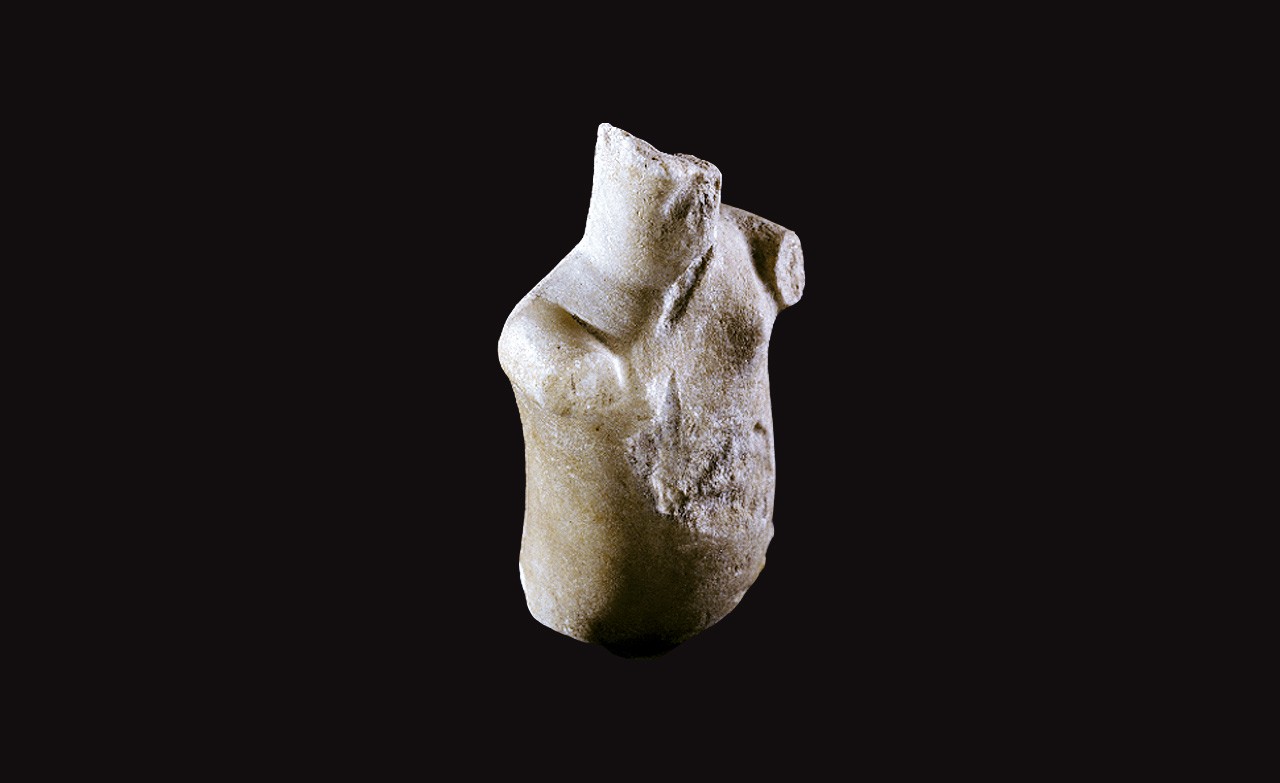 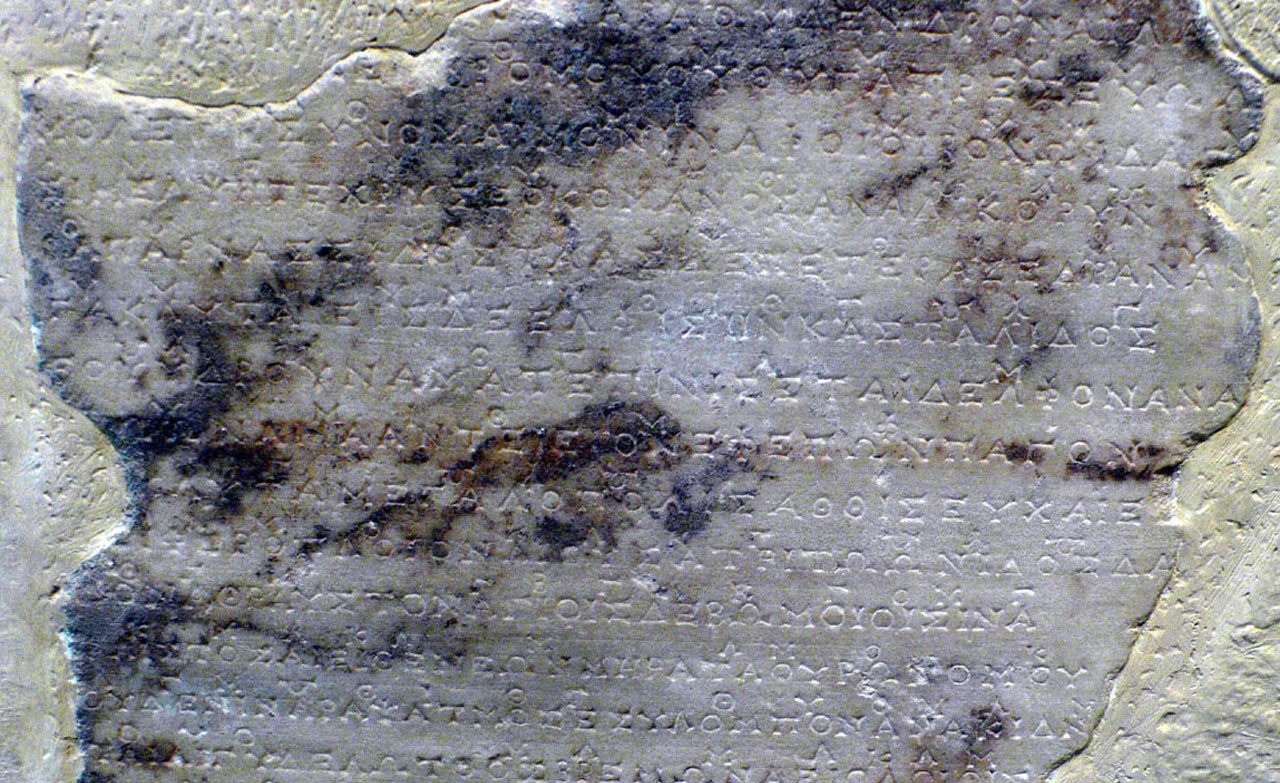 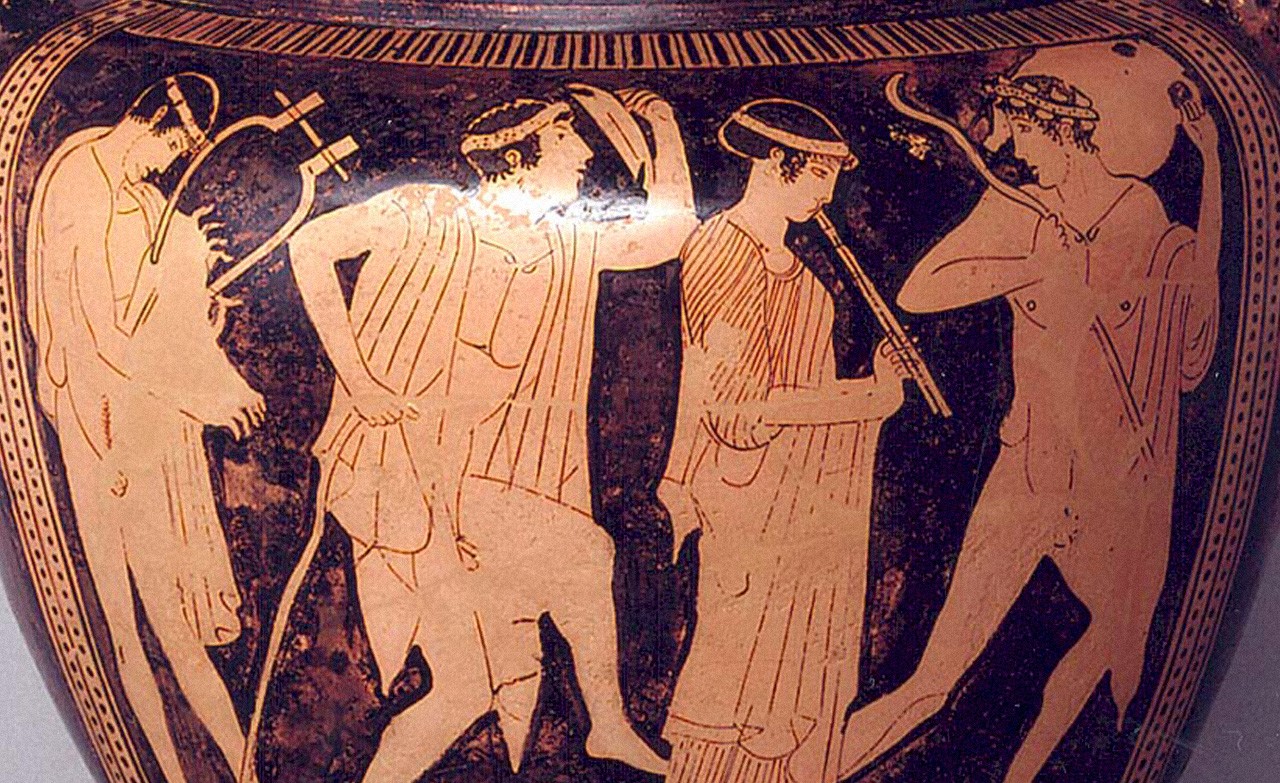 Music was a major and very popular art in ancient Greece. Almost all social activities were accompanied with music: religious feasts, weddings, funerals, athletic contests, war, etc. Plato, Aristotle and later philosophers believed that music can positively affect the character of a person. For this reason, they thought that it should be an essential part of children’s education.

Modern research reveals valuable information about ancient Greek music from a variety of archaeological and literary sources. A bone flute (aulos) of c. 5.300 BC from the Neolithic settlement of Dispilio at Lake Kastoria is probably the oldest archaeological find of musical interest in Greece. The famous Cycladic figurines of flute-players and “harpists”, dating to c. 2700 BC, attest to the significance of music for Early Bronze Age societies. Information for later periods is much more abundant and derives from diverse media, such as frescoes, clay figurines, vase-painting, reliefs and mosaics.

Literary sources, such as a few surviving musical texts as well as direct or indirect references in historical, philological, philosophical and theatrical texts, are also a valuable source of information. A 6th or early 5th c. BC clay epinetron (a type of clay vessel placed on the knees of weavers to prevent grease from the wool from spoiling their cloths) from Eleusis, decorated with a trumpeting Amazon, bears an inscription which is considered as the earliest musical texts known. The inscription contains the Greek syllables TO, TH, TO, TO, TE and is thought to record the song of the Amazon.

Originally, music was taught through verbal tradition. In the early 5th c. BC, however, Greeks invented a system of musical notation, which is considered one of the oldest in the world. It consisted of Greek letters and punctuation marks, which combined created approximately 1600 symbols.

Music was used for a variety of purposes. Percussion and string instruments accompanied all kinds of ritual dancing already from prehistoric times. According to Homer, bards used to recite their epics with the accompaniment of music. The very term “lyric poetry” – which developed in Greece during the Archaic period – derives from the “lyre” which accompanied always the poems.

Music, like any form of artistic expression until the Classical period, was closely associated to religion. During the four Panhellenic festivals, held at regular intervals at Olympia, Delphi, Nemea and Isthmia, musical contests were organized next to the athletic games. Similar contests took place in local festivals, such as the Panathenaea. The most popular types of songs were religious in character: the dithyramb, a song for Dionysos, and the paean, the sacred song of Apollo. According to Aristotle, ancient drama, especially tragedy, traces its origin to the dithyramb.

Music accompanied all forms of social activity. There were special songs for military processions or training and others for collective work. At the symposia, female hetairai entertained the male banqueters with their flutes. Private life also involved a lot of music. Love was frequently expressed through songs. Wedding songs accompanied the preparation of the bride and her arrival to the groom’s house. There were cradlesongs for the babies and special types of children songs. The funeral invoked also musical expression. Various types of mourning songs were sung by relatives and friends, as well as by professional mourners.

The kithara was probably the most common instrument in ancient Greece and is already mentioned in the Homeric epics. Together with the phorminx, they had wooden sound-boxes and were mostly played by professional musicians. Other strings included the lyre, Apollo’s instrument according to mythology, and the slightly larger barbitos. Both lyre and barbitos had their sound-boxes made of turtles’ shields and could be also played by amateurs.

Among the wind instruments, the aulos was the most common one. It consisted of a single pipe or a pair of pipes and was extensively used in rituals for Dionysos. The Pan-pipe consisted of multiple pipes without vibrating reeds in their mouthpieces. Other wind instruments include the salpinx and the horn.

Ancient Greeks used also a large array of percussions: the tambourine, the rattles and the sistrum were the most common ones.

• Hooker J.T. (ed.) 1993: Reading the Past. Ancient Writing from Cuneiform to the Alphabet (London)

• Barker A. 1989: Greek Musical Writings: Volume 1. The Musician and his Art (Cambridge)