Scientific medicine, influenced by philosophy, began to develop alongside theurgic healing. From the 6th c. BC, the Pre-Socratic philosophers, rejecting mythological explanations, were using rational thought to interpret natural phenomena. They extended their thinking to the interpretation of human phenomena – such as health, disease, healing, and death.

Around 500 BC, the natural philosopher Alcmaeon of Croton was the first to define health as the isonomia (i.e., equality and balance) of the opposed powers of the body (hot - cold / dry - wet / bitter - sweet). Thus, whenever any one of these powers prevails over all the others, this creates monarchia, which leads to illness. Consequently, to heal the organism one must restore the balance of these powers.

According to the philosopher Empedokles (5th c. BC) the four components of the universe – and hence of man – are Fire, Air, Earth, and Water. Hippocrates (460 – 375/351 BC), influenced by this philosophical concept arrived at the Humoral Theory. He maintained that the human body contained four humours, or bodily fluids, (blood, phlegm, yellow bile, black bile) and each humour had a qualitative attribute (hot, cold, dry, wet), which corresponded to one of the four components of the universe. Eukrasia, the harmonious balance or blending of the four humours, constitutes the main feature of health. Conversely, the disruption of this balance (dyskrasia) leads to the onset of various diseases.

Thus disease, escaping the purview of divine powers, began to be attributed to natural causes, to factors associated with the environment, age, weather conditions, living conditions, and, generally, with how people live.

Scientific Medicine over the years

The earliest Greek medical treatises appear to have been written around the middle of the 5th c. BC. These are the approximately 60 works that make up what has come to be known as the Hippocratic Corpus, which reflect the views of Hippocrates and his students. At the same time, the Hippocratic Works introduce a medical code of ethics, a first attempt to define the necessary guidelines that should govern the behaviour of the physician and the practice of the art of healing.

One of the methods Hippocratic physicians employed was prognosis. Based on the patient’s medical history and his condition at the time, they sought to predict the course of the disease. The confirmation of the physician’s predictions led to his acquiring the trust of his patients and their families, while simultaneously establishing his reputation.

Drawing on the legacy of the Hippocratic teachings, medicine proceeded to make new conquests in the following centuries. The Hellenistic period is marked by great specialization and the development of scientific research. In the 3rd c. BC in Ptolemaic Alexandria, Herophilos and Erasistratos conducted the first scientific investigations into human anatomy. Their research made a major contribution to the advancement of medical knowledge, and, especially, the development of surgery.

In the early 1st c. AD, the Roman encyclopaedist Cornelius Celsus wrote his eight-volume work De Medicina, which revealed the achievements of Greek medicine to the Latin-speaking Roman world for the first time. During the 1st c. AD, Dioscorides, a Greek army physician, authored the five-volume work On Medical Material, presenting the therapeutic properties of plants as well as of animal and mineral products. His work constitutes the forerunner of modern pharmacopoeia.

The whole body of knowledge of ancient Greek medicine was finally systematized in the 2nd c. AD by a new emblematic figure: Galen of Pergamon. After studying medicine in Alexandria, he settled in Rome in 162 AD and was eventually appointed personal physician to three emperors. A prolific author, his theories on anatomy, physiology, and nosology influenced Western medicine for over 1300 years.

A dedicated follower of Hippocrates, he based himself on the theory of the four humours and attempted to interpret human behaviour according to each person’s prevailing humour. Thus, he documented four basic types of human temperaments: sanguine, phlegmatic, choleric, and, lastly, melancholic; the latter was due to an overabundance of black bile (Gr. melaina chole).

Galen also advanced pharmacognosy and pharmacopoeia with the complex medicaments known as Galenic formulations, which he manufactured himself.

However, it is striking that in Christianity’s early centuries, although rational medicine was by then well-established, theurgic healing continued to draw crowds of patients, as evidenced by the votive offerings in the Asklepieia.

The reason appears to be that scientific medicine was able to offer assistance only up to a certain point. There were times when it was completely unable to contribute to a cure, while physicians frequently refused to take on cases of chronic and incurable illnesses. Consequently those suffering from such diseases, or who could not afford the expense of a physician, were forced to turn to an alternative refuge, to a higher divine power in which they placed their hopes – something that occurs even now when science finds itself at a loss 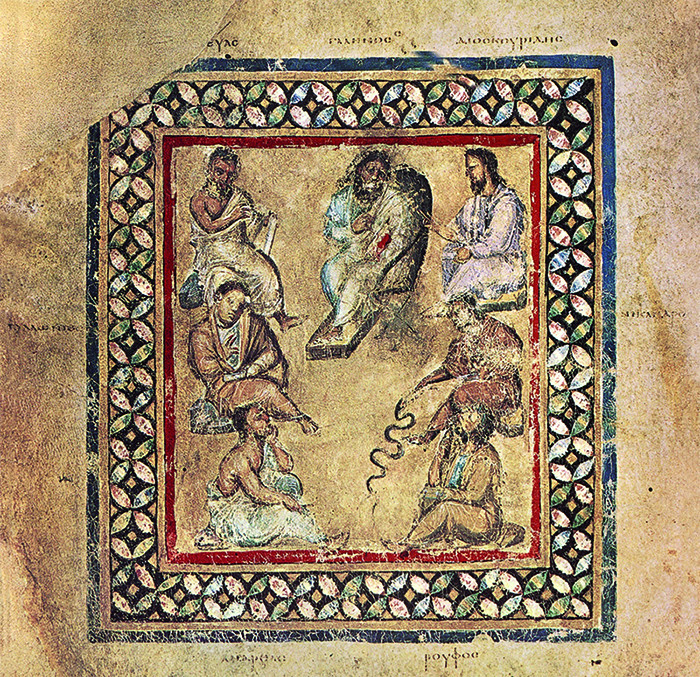 1/2 The picture shows Galen in the position of honour with Krateuas on his right and Dioscorides seated to his left. Beneath are Nikandros of Colophon, Rufus of Ephesos, Andreas of Karystos, and Apollonios Mys probably of Alexa 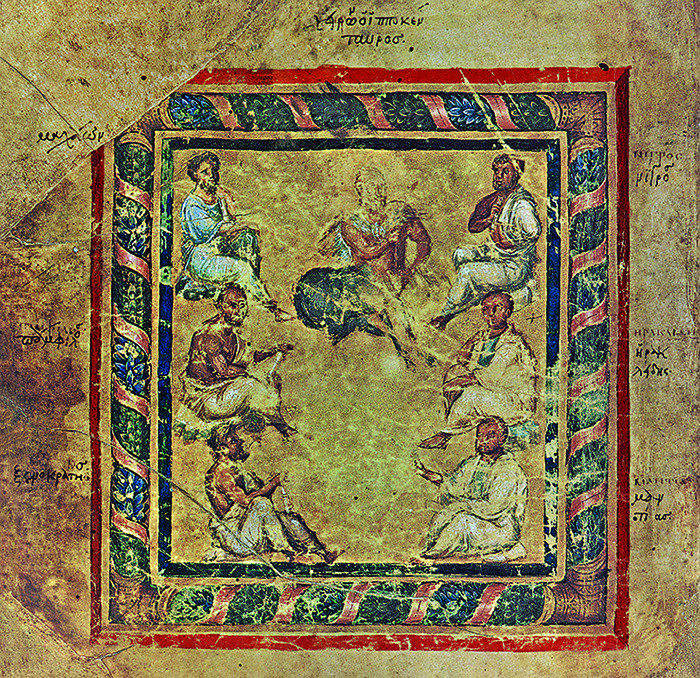 2/2 Ιn the middle of the upper row, depicted is Cheiron, the centaur endowed by Zeus with the gift of healing through plants and medicinal herbs. He is surrounded by six great names of ancient medicine and pharmacology. From the top right of the image clockwise, the figures depicted are Nigrus, Herakleides of Taranto, Mantias, Xenokrates of Aphrodisias, Pamphilos of Alexandria, and Machaon, the son of Asklepios