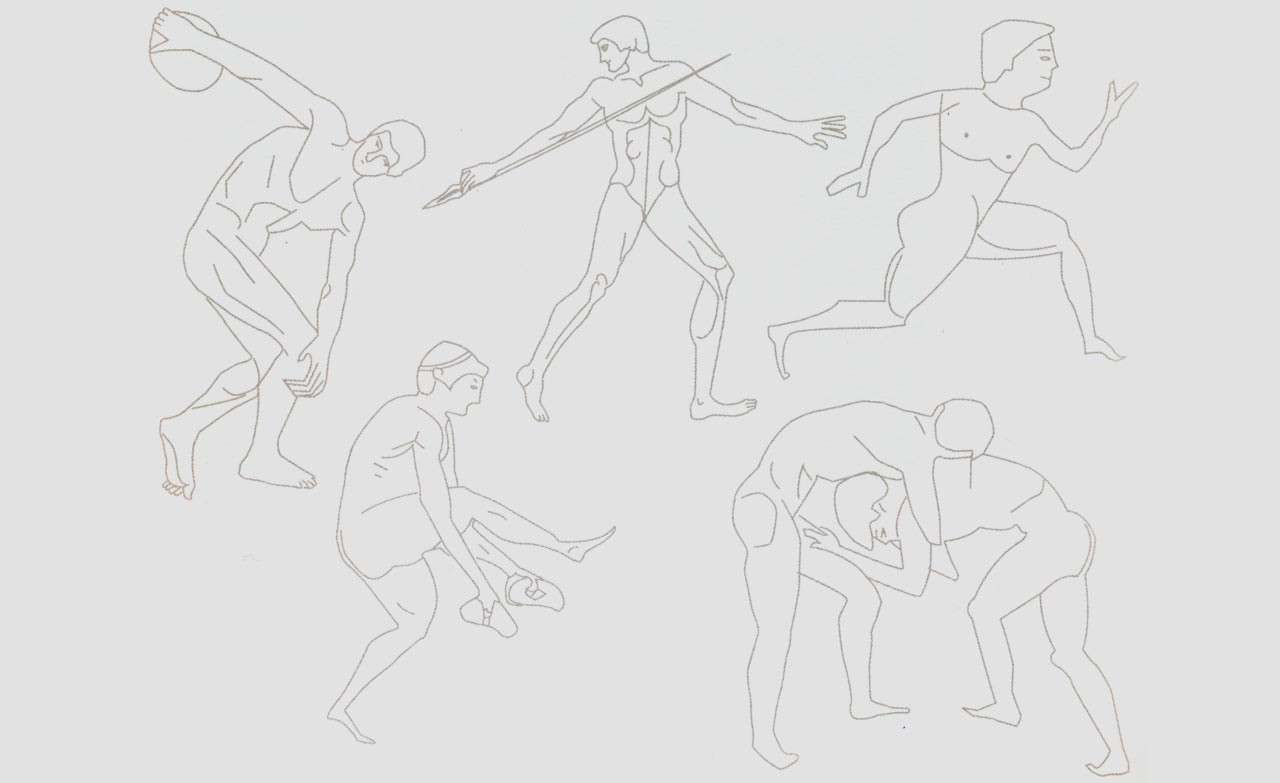 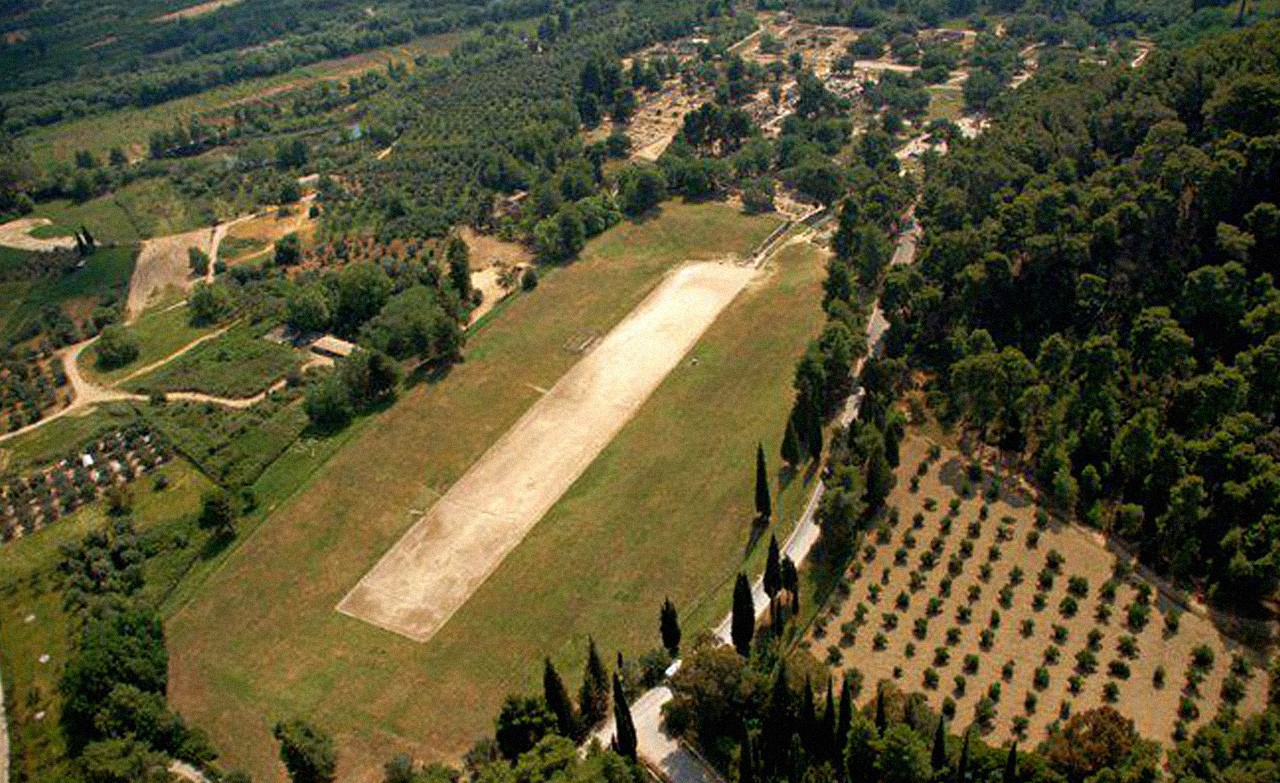 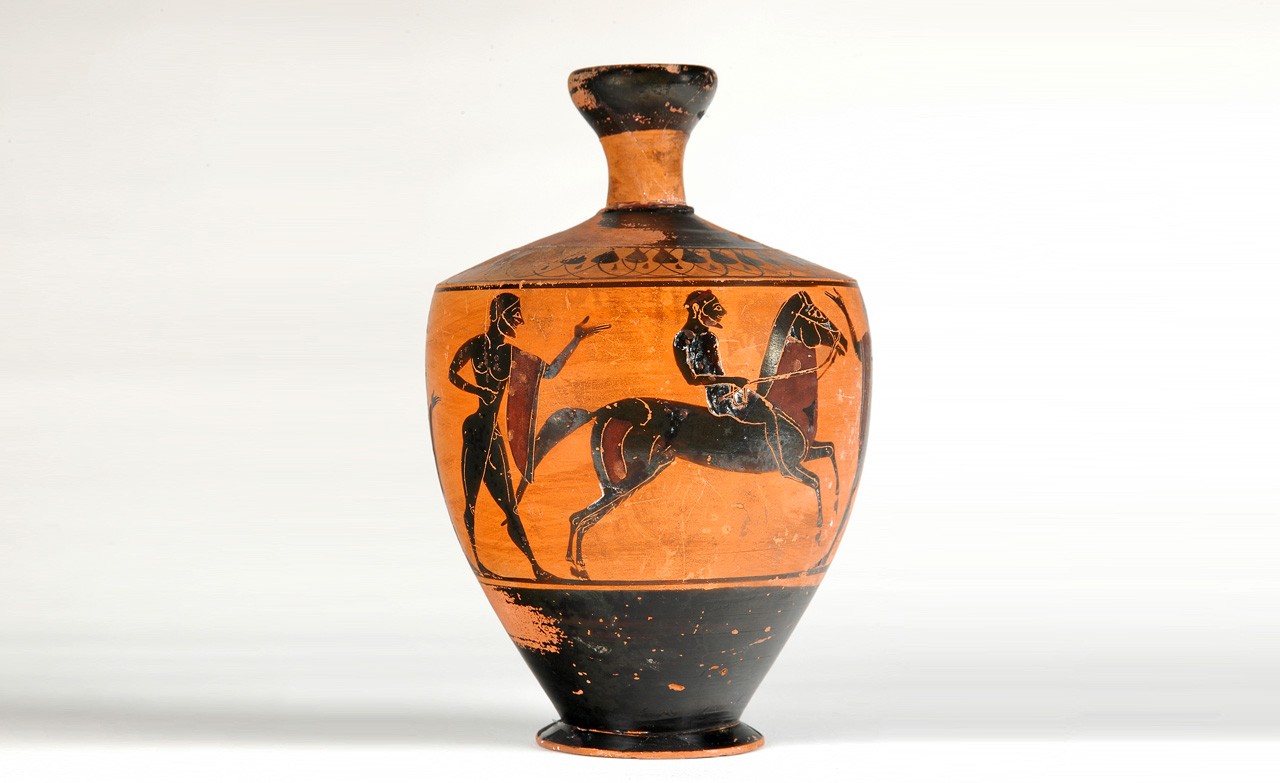 Athletic games formed one of the most interesting institutions of ancient Greece. Contemporary research has not resolved yet the problem of their origins. The fact that many ancient myths attribute their foundation to gods or heroes, however, suggests that even in antiquity their historical beginnings were somewhat obscure.

The roots of Greek athletics should be probably sought in the Bronze Age. Such activities as bull-leaping (taurokathapsia) and boxing, depicted on Minoan frescos, sealstones and relief stone vessels from Crete and Thera may hint to an early notion of athletic contest. In Mycenaean Greece, however, it is hard to find even a single archaeological piece of evidence for games. Nevertheless, the Homeric descriptions of athletic competitions (called athla), are thought to reflect Mycenaean traditions. The first detailed narration of games is to be found in the Iliad (23: 256- 24: 6) and refers to the athletic contest organised by Achilles to honour the dead Patroklos. In the Odyssey (8: 97-253), the Phaeacian king Alkinoos organises athletic competitions to honour his visitor Odysseus. In both cases, the vocabulary is rich and rather specialized, implying a long tradition of athletics in the Mycenaean world.

In historical times, games were intrinsic part of great religious festivals. Stadiums were closely associated with sanctuaries and athletic events were considered as a kind of offering to the gods. Initially, games were associated with local heroes or the founder of a city, but gradually they became inherently linked to an Olympian god. Among the numerous games organized in ancient Greece, only four achieved a panhellenic status: the Olympic Games, organized every four years in Olympia to honour Zeus, the Pythian Games, every four years at Delphi to honour Apollo, the Isthmian Games, every two years at the Poseidon sanctuary in Isthmia, and the Nemeian Games, every two years in the Zeus sanctuary at Nemea. Panhellenic festivals and games helped Greek cities to solder a sense of common cultural, religious, political and perhaps ethnic identity.

The Olympic Games were evidently the most ancient of all. According to tradition, they were established in 776 BC. Initially, they had a local character but gradually started to attract participation from other areas, too, ultimately to become the most prestigious athletic event of the ancient world, which lasted without break until AD 393/4. Such was their importance that all war activities were withheld during the games (Olympic Truce). Moreover, the “Olympiads” – the interval between two consecutive Olympic Games – were used as an official method of measuring time (e.g. “the second year of the 10th Olympiad”).

The other major games were established later in time and, certainly, did not acquire a panhellenic status until the beginning of the 6th c. BC. All four games together formed a “circuit” (“periodos” in Greek); winning in all four of them was the greatest honour for an athlete.

In principle, every citizen could take part in the games, irrespective of his social or economic status. However, the amount of time required for training (and the consecutive refrain from work), the necessary equipment and the costly trips made athletics a demanding activity that was practically reserved for member of the aristocratic class - especially so, in the case of equestrian events, which required the ownership and training of horses. Participation in games was by and large a male privilege. Females – especially married ones – were strictly excluded, even as spectators. We do know, however, that female contests, the Heraia (in honour of Hera), were organized in Olympia every four years and it is not improbable that some kind of athletic competitions for women took place in other sanctuaries, too. Yet, sports and games were considered as primarily male activities.

Victors in athletic games – especially the panhellenic ones – enjoyed a lot of privileges and the admiration of both friends and enemies. Frequently, upon their arrival at home, part of the city wall was demolished; the authorities would accord them economic allowances. The status of victors was very high and in several cases it was used to support political claims. In Hellenistic times, some Olympic victors were even venerated after death as heroes.

The events and the premises

The main premises were the Stadium, the Gymnasium, and the Hippodrome, which are to be found not only in all major sanctuaries but also in most ancient Greek cities. Among them, the Gymnasium was the most important one. It was not only the main training area for the games, but also the place where youths were prepared for their military service. It formed integral part of any Greek city and soon developed into a space of intellectual education, too, attracting artists, philosophers and orators. In the Gymnasium, Greek youths trained their body and exercised their mind in order to become proper citizens, able to participate in common affairs and defend their homeland. It was in the major Gymnasia of Athens that important philosophers established their schools: Plato at Academy, Aristoteles at Lyceum and Antisthenes at Kynosarges.

Apart from (or because of) their significance as a major social institution, games were also a prolific source of artistic inspiration. Some of the masterpieces of ancient Greek art (e.g. the Delphi Charioteer) were votives offered by victors to sanctuaries. Countless athletic scenes decorate black- and red- figure vases of exquisite quality. Last but not least, a particular kind of poetry, represented by such authorities as Bacchylides, Simonides and Pindar, was developed exclusively to honour victors in athletic contests. 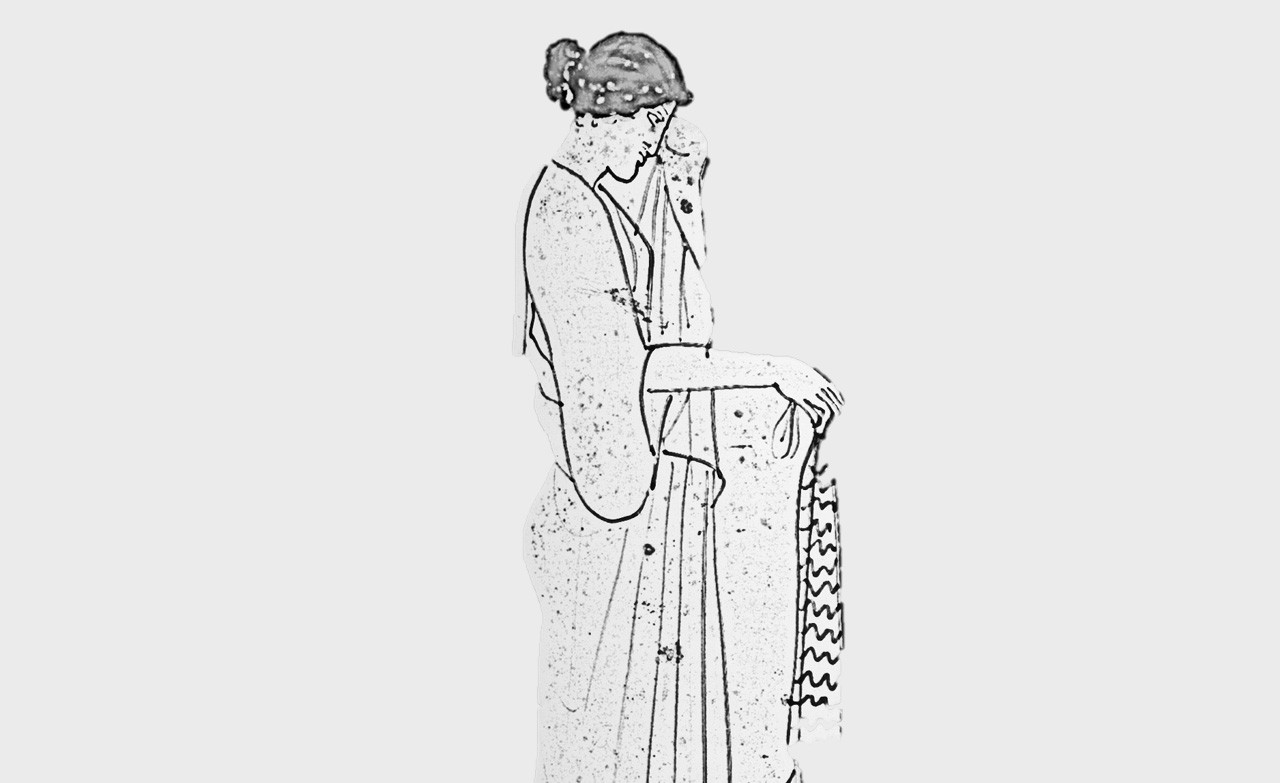 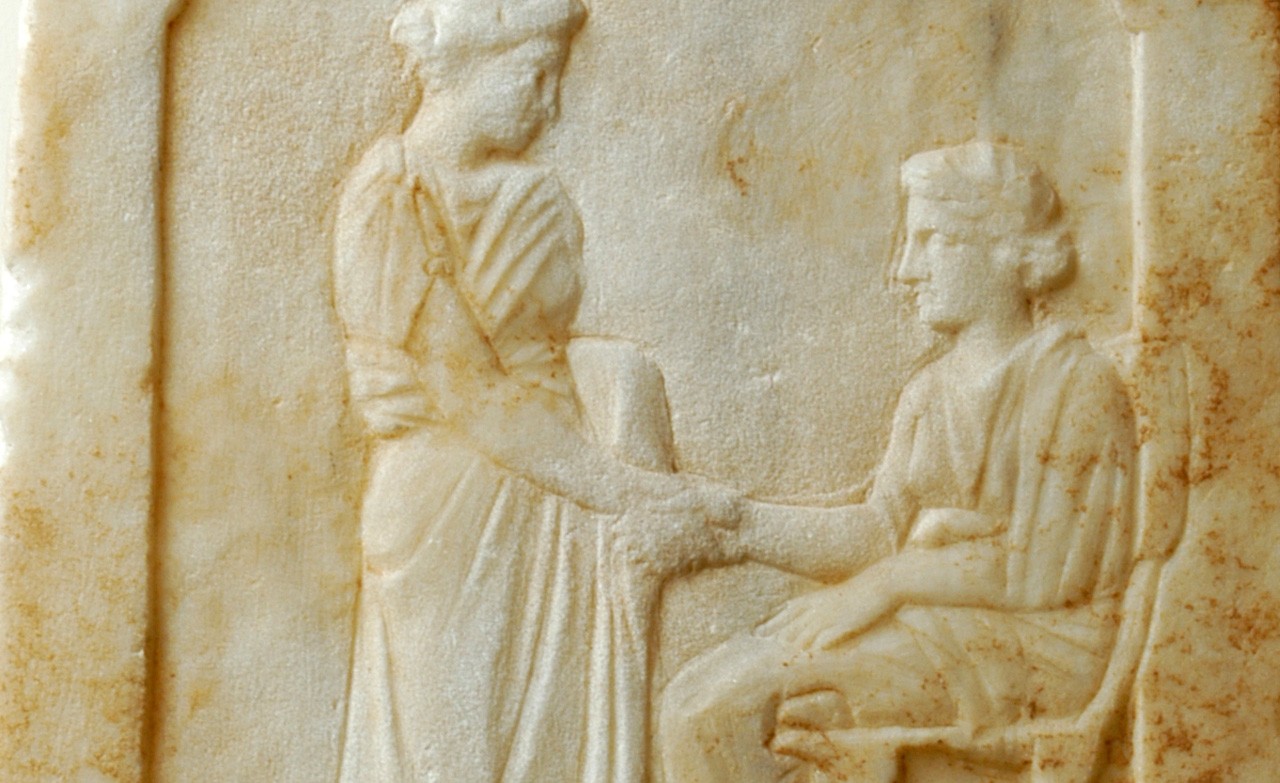 In ancient Greece, certain mandatory practices were carried out for the dead; these were determined by customary law or by special laws in each city-state. The sum total of the obligations of the living to the dead is what constitutes the nomizomena (funeral rites). The great importance given in antiquity to fulfilling these obligations is evident both in literature and in the archaeological evidence.

The burial ritual, the funeral (kedeia, from the verb kedomai, meaning to care for), encompasses three essential stages encountered throughout the entire Iron Age; we know them from the description of Patroklos’s funeral in the Iliad: prothesis, ekphora, and interment.

The prothesis, which is the laying out of the dead for people to pay their respects, took place at the home of the deceased and lasted one day. The dead individual was placed upon a bier (lechos), with the feet toward the door of the house and the head lying uncovered on a pillow. Women have a specific role during the entire process of preparing the dead and, generally, in the ritual of death: They not only bathe but also dress and adorn the deceased, which contributes to the corpse’s purification. On the other hand, male visitors coming to pay their respects did not approach the bier the way the women did. The corpse was considered a source of miasma (pollution), and it appears that, once the funeral rites were concluded, the relatives of the deceased and everyone who was involved in the funeral, and had thus come into contact with the dead body, were pollution carriers and needed to undergo ritual purification.

Mourning was one of the most important elements of the burial ritual. The mourning gesture is depicted in exactly the same way throughout antiquity: both hands are raised to the head in what has been designated as the “traditional gesture of mourning women”.

The ekphora, the ritual procession of the deceased from the location of the prothesis to the burial site, took place on the third day after the death. The deceased is placed on a bier in a wagon or is borne by klimakophoroi (ladder carriers) or nekrophoroi (corpse carriers) followed by a cortege. According to Solonian legislation, the cortege to the cemetery had to follow secondary roads, be silent, and leave the city walls before sunrise. Men led the ekphora and women followed behind, and there were restrictions on the clothing the women following the procession could wear. The purpose of the ekphora process, like that of every other procession, was to publicize the event to the community and at the same time to ritually escort the deceased on his or her final journey.

The depiction of an actual interment is extremely infrequent in iconography. Depending on place and period, the deceased might be inhumed, or the corpse might first be cremated and its bones and ash subsequently buried. Different burial practices have resulted in various types of graves that have been discovered throughout Greece.

Although we have little information regarding the actual interment, we know with certainty that after the grave was filled, there would be libations to the dead and to the gods of the underworld. We can also assume that a few words or some type of prayer would be said. Libations were performed directly over the grave or through vases manufactured for precisely this function, which had a hole in their base.
The importance of interment is evidenced by the fact that its denial was the ultimate punishment for the deceased. However, in emergency situations, the framework surrounding the burial of the dead was not adhered to. As Thucydides reveals, and archaeology confirms, no care was taken during the hurried burial of the victims of the Plague of Athens during the Peloponnesian War.

The tomb and its marker

The separation of the necropolis from the settlement began in the tenth century BC, continued during the entire Geometric period, and was apparently completed in most Greek cities during the sixth century BC. Establishing cemeteries outside the settlements served sanitation requirements and the need to avert pollution, as well as other practical needs, since the settlements required space for houses, public buildings, and sanctuaries. In the cemeteries of the ancient Greek cities, one could find various types of graves, depending on the period, the region, the city, and the financial standing of the deceased and their families.

These differences can also be located in the grave monument over the tomb, although one common element can be detected in all interments: the sema (grave marker), which signaled the presence of the grave and for some researchers also constitutes the equivalent of a stand-in for the deceased. Kouroi and korai, free-standing sculptures of Archaic art that portray young men and women, are among the best-known grave markers of antiquity. Mythical creatures used as grave markers or on monuments are usually the sphinx and the Gorgo that functioned as apotropaic images. Wild animals such as lions were also frequent and they served as the grave’s guardian; and there is no lack of reliefs or free-standing sculptures in the form of cats or dogs marking the graves of beloved household pets or hunting companions.

However, the most widespread type of grave marker is the stele, which appears during the Mycenaean years and changes form, type of decoration, and size according to the period. The stone marker in vase form—loutrophoros, dinos, or lekythos—with relief representations makes its first appearance in the cemeteries of the Classical period. The loutrophoros usually serves to mark the grave of someone who died unmarried, since this vase was used to carry water for the prenuptial as well as the funeral bath.

Whatever its form or decoration, the grave marker is sometimes accompanied by an engraved inscription praising the dead, addressing passersby or visitors, and revealing the name of the dead.

The grave monument and its marker are the only above ground and, hence, visible elements of a grave. This fact frequently led to excess, especially on the part of the wealthy, who would commission large and lavish monuments with many free-standing sculptures for their dead. On two occasions, the city of Athens attempted to reduce the flamboyance of grave monuments with special legislation that set very strict limits on the money and man hours that could be spent on their construction and ornamentation: the legislation of Solon or, according to others, Cleisthenes in the sixth century B.C. and that of Demetrius Phalireus in 317 B.C.