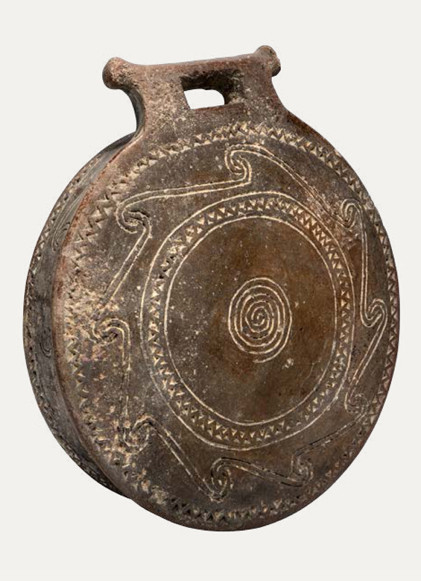 The so-called 'frying pan' appears in Early Cycladic I but becomes particularly popular in the Early Cycladic II period. It owes its conventional name to the characteristic shape and not to its use, which is kind of an enigma. Frying-pans have low vertical or slightly flaring walls and a forked or quadrilateral "handle", while the surface of the "base" usually bears incised or impressed decoration of concentric circles, simple or running spirals, star motifs or even rowboats. This vessel bears both incised and impressed decoration infilled with kaolin. A central spiral is surrounded by a double running spiral and a band of continuous small triangles. That kind of decoration is usually thought to represent the sun and the sea. "Frying pans" are mostly found in graves although we do know examples from settlements, too. As yet, it has not been possible to determine either their use or the precise meaning of their decoration. If they were used in burial rites, themes like the sun and the sea may reflect beliefs for the afterlife. However, the presence on the "handles" of some "frying pans" of a large triangle very similar indeed to the pudenda of marble female figurines, suggests some kind of association between natural elements and female fertility.