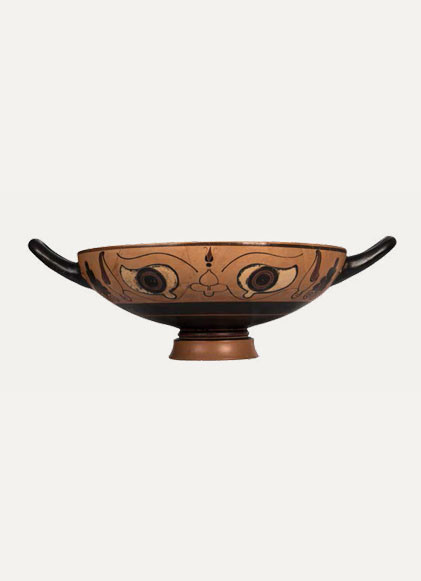 This type of kylix is termed "eye-cup" because of its characteristic decoration with enormous eyes on both sides of the vessel. The eyes refer possibly to folk beliefs about the "evil eye" and the warding off of its effect, or simply warned the user of the vase about the loss of consciousness that excessive wine-drinking caused (kylix was the standard vessel for drinking wine). The vase belongs to a particular class of pottery known as "Chalcidian". It is a homogenous group of high quality black-figure vases which appeared around the mid-6th c. BC and continued in production until the end of the century. "Chalcidian" vases have been found mainly in graves in the West (South Italy, Sicily, Etruria, Massalia [mod. Marseilles], and Emporion in Spain). Their name is due to the fact that they frequently bear inscriptions in letters of the Chalcidian alphabet. There is no consensus as to their place of production, although many researchers consider them to come from a Chalcidian colony in Magna Graecia - e.g. Rhegion. So far, no "Chalcidian" vases have been found in Chalcis itself. Eye-cups are considered the chief products of the second generation of the "Chalcidian" workshop. This particular one is attributed to the "Phineus Painter".