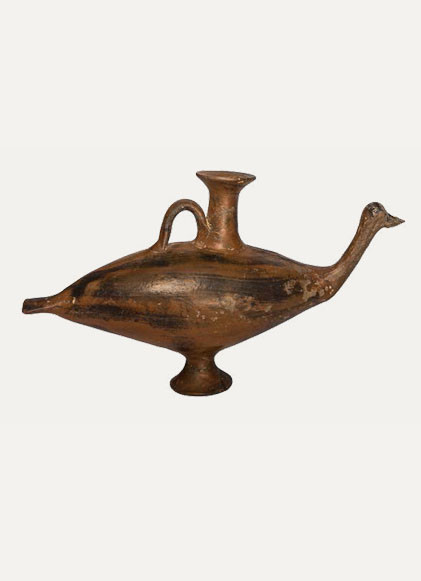 This vase, with its bird-shaped body and vertical neck, comes from Skyros, most probably from a grave, and is the product of a local workshop. Vases of this kind were formerly thought to be of Cypriot origin, but recent research points to an Aegean provenance. Their precursors should be sought in the small, hollow bird figurines that were made along with other types of models and zoomorphic vases during the 12th c. BC, in Mycenaean Greece. The earliest Mycenaean examples have no spout, which is a distinctive feature of the later bird-shaped vases. Bird-shaped vases were used for libations and are found as grave goods and more rarely as ritual vessels in sanctuaries. Those found in Mycenaean graves were associated with child burials but this exclusive association apparently ceased in the Early Iron Age. Bird-shaped vases now occurred in graves of both children and adults, but only wealthy ones.