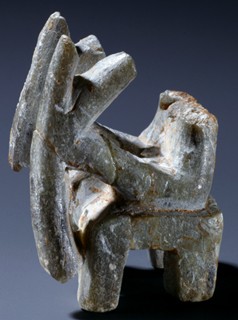 Fragment of a seated figure

Cycladic sculptors produced a series of figurines of "special form", which although sharing the same artistic conventions as the canonical examples, yet they demonstrate a more liberal apprehension of the form and the third dimension. Despite the poor state of preservation in this remarkable figurine, it is still possible to reconstruct its original pose: it represents a man who is seated on a four-legged stool, resting his elbows on the knees and supporting his head with the palms. Several seated figures are known from Cycladic art but are normally represented with straight back, either in the usual position with the arms folded below the chest or as musicians or as cup-bearers. The pose of this figurine - which has earned it the nickname 'The Thinker' - is unique. This in combination with the unusual material (green steatite instead of marble) show a marked departure from the traditional Cycladic forms and may indicate an origin from outside the Cyclades, perhaps Attica.