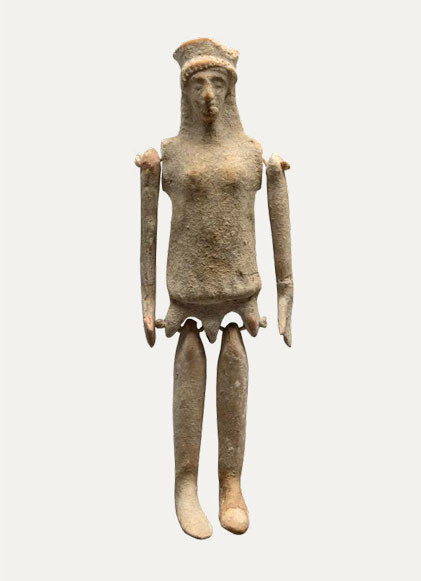 This terracotta female doll or marionette with headdress and a short chiton has articulated arms and legs that were joined to the torso with string or wire and were movable. Figurines of this type were produced throughout the 5th and 4th c. BC in the pottery workshops of Corinth, from which this example apparently comes. The front part was made in a mould, while the back of the figurine was flat. A tiny hole at the top of the head was used for dangling the figurine from a string, as if dancing. In some cases the figures held castanets or rattles. This "toy" is one of the rare finds that shed light on the world of children and of play in Antiquity. Jointed dolls are frequently found in child graves, while relevant representations of children holding similar objects are encountered on grave stelai, especially in Attica. Such figurines also had a cultic function, as is attested by their discovery in sanctuaries. In all probability they were associated with the worship of deities of marriage, since it is known that nubile girls dedicated their playthings to guardian goddesses of wedlock before coming of age or before their nuptials.