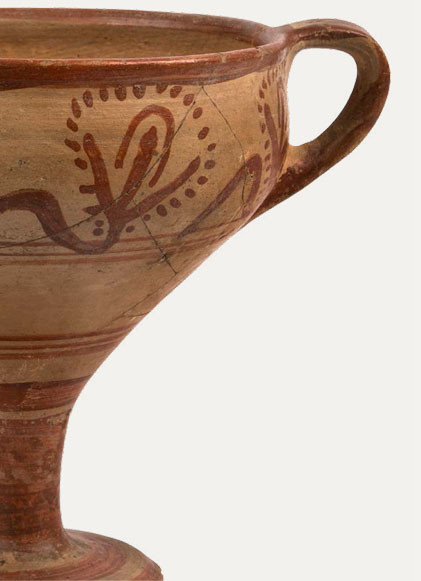 The kylix was the main drinking vessel of the Mycenaeans. It is a creation of Greek Mainland potters and its origin can be traced back to the Middle Helladic tradition of Minyan Ware. Kylikes were widely used in rituals, as inferred from wall-paintings and sealstones, where they are depicted in the hands of priestly figures most probably performing libations. The frequent discovery of broken kylikes (together with food residues) at the entrances of graves indicates that they were used in funerary meals, too; in all probability, the participants smashed the kylikes ceremonially after a final toast to the memory of the deceased. They were, also, used in symposia or banquets, as attested by settlement finds such as the dozens of unused kylikes discovered in the storerooms of the palace at Pylos. Chemical analyses have shown that kylikes frequently contained dregs of wine or a kind of beer brewed from barley and honey. The ritual character of kylikes, in combination with their elegant lustrous decoration, evidently made them much coveted throughout the Eastern Mediterranean and South Italy, to which they were exported as luxury items for consumption by the local elites throughout the 14th and 13th c. BC.