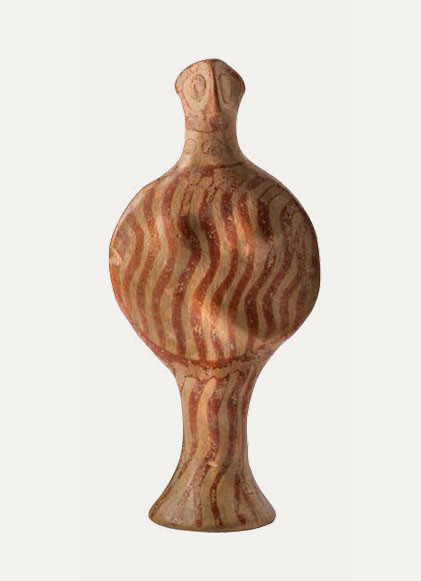 Schematic female figurines with arms folded or raised in an attitude of supplication are the commonest types of Mycenaean cult objects. They are small in size, handmade and are called conventionally Phi-type, Psi-type and Tau-type because of their similarity to the corresponding letters of the Greek alphabet (Φ, Ψ and T). This particular example belongs to an early stage in the development of the Phi-type figurines, when the hands were still rendered in a more naturalistic way (Proto-phi type). Breasts are rendered plastically while the dots on the neck represent a necklace. Mycenaean figurines made their appearance at the end of the 15th c. BC and continued to be used until the end of the 12th c. BC. Their origins should be sought in the Minoan tradition, since figurines are totally absent from the Greek Mainland during the preceding Middle Helladic (2000-1600 BC) and early Late Helladic periods (16th-15th c. BC). Nonetheless, they soon achieved a high degree of stylistic uniformity and began to be used widely all over the Mycenaean world. Mycenaean female figurines are found frequently in shrines, graves and even houses. Their symbolism was complex and their use probably varied according to the circumstances. In general, they are thought to represent goddesses possibly associated with fertility (some Phi-type figurines carry babies in their hands). As, however, identical figurines are frequently found in the graves of children, some scholars believe that they may have been also used as toys.